Introverted Playboy made the following statement over at Just Four Guys as part of a larger argument that marriage no longer matters:

European countries today have even lower marriage rates than the US. I think something like 80% of Swedish children are born out of wedlock. Yet society has not collapsed. It just evolves.

There are a couple of relevant questions here.  What are the out of wedlock birth rates for Sweden and other European countries?  And, what percent of children in each country grows up with both their mother and their father?  From the point of view of the child, parents who never had a wedding but stayed together are arguably more “married” than parents who had a wedding but split while the child was growing up.

I did a bit of searching and found recent data for out of wedlock birth rates as well as the percent of adolescents (11, 13, and 15 year olds) living with both parents from the OECD family database.  I combined data from tables SF1.3.B and SF2.4.A and discarded countries which weren’t represented in both tables.  I left in the countries from outside of Europe so long as they were included in both tables.  Normally data on marital status at birth is presented as the percent born out of wedlock, but I converted this to the percent born in wedlock so the chart would be comparing like numbers.  Click on the chart for a larger version, and see the tables linked above for the numeric values represented in the chart as well as more information on the data sets. 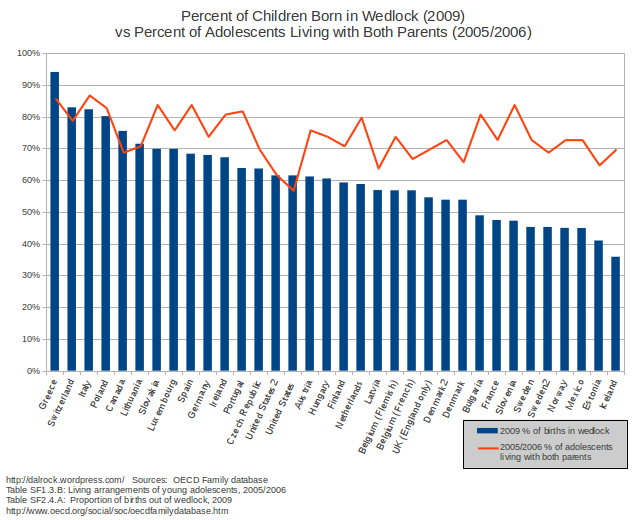 Since it combines data from two different data sets there are some irregularities which should be noted.  The first is the different dates.  The data on percent of births in wedlock is for 2009, and the data on adolescents living with both parents is from 2005 and 2006.  In addition, a few countries are listed with two different estimates for the percent of adolescents living with both parents.  For example, note that there are two values for the US, labeled United States and United States 2.  The “2” indicates a different data source:

2  Data from questionnaire as sent directly to countries, children 0 to 17 (this contributes to differences with the HBSC-results).

Also, the adolescent living arrangement label for the UK says England only while the data on births in wedlock doesn’t include this restriction.  The former data set breaks out Belgium to French and Flemish speakers, while the latter does not.

However, there is a bigger problem with the chart above.  Out of wedlock birth rates are rising over time, and today’s adolescents would have been born during a time of lower out of wedlock birth rates.  Even worse, the adolescent living arrangement data is older than the birth data, so the date relationship is backwards.  I kept the chart above and shared it because it is still helpful to see the latest data in comparison, but if we are looking to understand the relationship between the two a different date relationship is needed.

With this chart the benefit of higher in wedlock birthrates on ultimate family stability is more obvious.  Still, the relationship is weaker than I would have guessed.  The relationship might appear slightly weaker than it really is due to the adolescents in the chart having been born a few years earlier than the out of wedlock birth data.  The data on adolescent living arrangements appears to be due for a refresh, so hopefully updated information will be published by the OECD in the near future so we can see what this looks like with the exact date gap.

The other thing which stands out in both charts is that there is a huge variation across Europe in out of wedlock birth rates and a much smaller variation in the percent of adolescents living with both parents.  Greece has an in wedlock birth rate of 94%, while only 36% of children in Iceland are now born in wedlock.  The percent of adolescents in the respective countries living with both parents is a much closer 86% and 70%.

Also, note that no country in Europe is evidence that a collapsing two parent family is no cause for alarm.  The most recent data available shows that all European countries have a higher percentage of adolescents living with both parents than the US*;  it isn’t Europe that is leading in the area of broken homes, it is the US!  Nearly all of the European countries listed have 70% or more of their children raised in an intact home, whether the parents had married prior to the birth of the child or not.  Given the continuing fall in out of wedlock birth rates, the results will certainly look worse for adolescents ten and fifteen years from now.  The costs to our society are in many ways baked in, even though we won’t fully experience them for many years.

*Romania isn’t listed in the charts above because out of wedlock birth data wasn’t available.  It had the next lowest percentage of adolescents living with both parents at 58% compared to the US with 57%.  The separate measurement of 62% for the US uses a different methodology (skewed toward younger children) and is therefore not comparable.