There is no baby boomer (or silent) generation divorce spike at retirement.

There is a common theme in the media suggesting that baby boomers are divorcing in greater numbers now that they are in or approaching retirement.  The most recent example I’ve seen is from Casey Dowd at Fox Business (H/T Empathologicalism):  Why So Many Baby Boomers are Getting Divorced.  The breathless headline is accompanied by the obligatory image of an older woman fed up with her husband.  The actual words need not be written:

This is all standard fare for those selling divorce.  Rule number one is you only sell divorce to women.  Women eat this up, which is why every form of women’s entertainment has divorce fantasy as a staple.  Selling divorce to men would be in bad taste, as this would leave fatherless children and more importantly men wouldn’t stand to be pandered to so shamefully.  There are a number of other rules, including giving the impression that everyone is doing it, especially older women.  If you can convince the public that grey divorce is rampant you can have maximum impact destabilizing and demoralizing all marriages.  Why stick through difficult times if late life divorce is inevitable?  You may as well quit now.

The problem is the line between news and entertainment is frequently blurred.  Because of this we have a rash of headlines suggesting there is an explosion in divorce around retirement.  This is quite simply not the case.  Here is what Mr. Dowd writes in the Fox Business article:

The divorce rate among boomers has jumped recently and that number is only expected to climb.

He cites statistics from the National Center for Family & Marriage Research (NCFMR) at Bowling Green State University in making this claim.  With a bit of searching I found these excellent charts* from the NCFMR.  After looking at the data referenced as well as the working paper from the same group on the topic it is clear that the statement referenced above is incorrect in both of its assertions.  The divorce rate among boomers has fallen, not increased, and it is expected to fall further, not climb.  In addition, this and other articles leave the false impression that late life divorce is relatively common.

As I’ve shown previously and the charts linked above confirm, divorce is much less common as couples age.  The changes under discussion are large percentage changes in very small numbers.  For example, look at the divorce rates per 1,000 married couples age 55-64 in figure one in the chart linked above.  In the US in 1990, there were roughly** 5 divorces per 1,000 married couples in this age bracket.  Looking at the same age bracket today, it has doubled to 10 per 1,000 married couples.  This value of 10 is very small compared to the roughly 30 divorces per 1,000 couples for those now in their twenties and early thirties.  While there will be a few more grannies batting their bifocaled eyelashes on the dating scene, this is more of a trickle than a flood.  You can get a sense of perspective from a chart I put together using similar but slightly different data than what the NCFMR shows in the charts linked above.  Here is how divorce risk changed by age when looking at women in the US in 2009:

More to the point, if you are a boomer your divorce risk has dropped dramatically over the last 20 years.  You might be wondering how this could be given the doubling stats I referenced above, but the answer is simple.  Twenty years ago boomers were twenty years younger and experiencing much higher divorce rates than they are now.  Here is what happened to divorce rates for boomers and silents using the NCFMR Figure 1 data**: 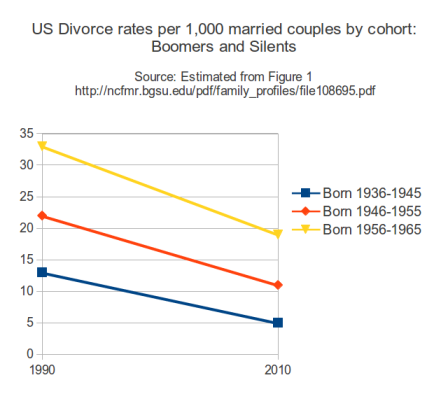 Here is the data compiled in chart form: 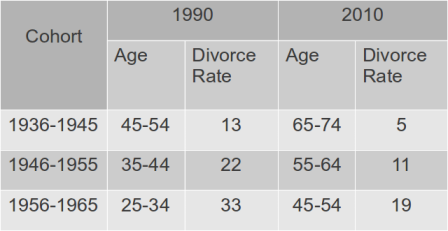 While there is something interesting happening, there is no jump in divorce rates for any of the cohorts of boomers and silents measured in the data referenced.  All cohorts experienced dramatic reductions in divorce rates during this time, and are expected to experience more of the same.  What has happened is a bending of the curve of divorce distribution across time.  I noted the same basic phenomenon in the UK when considering the divorce implications for young marriage here (see final chart).  The simplest answer for the US data seems to be that boomers and silents simply divorce at much higher rates than the generations before or after them.  As they move through the age brackets, this would account for making the curve steeper in 1990 and less steep in 2010.  Part of this could be that these cohorts of boomers and silents divorced and remarried more than previous cohorts did when they were younger, and second and third marriages have much higher divorce rates.  At any rate, this is something very different than the claimed jump in divorce rates as boomers and silents retire.

Do you think these trends are going to continue? Is the 30-year itch the new seven-year itch?

*This data was compiled similarly to the data I compiled myself here.  My data is for 2009 and theirs is for 2010 but the two still are extremely close.

**Their charts don’t have data value labels so I may be slightly off in reading their values.  However, even if I’m off by one or two either way it doesn’t change the analysis.