“Just release the bloody book, will you” my readership cries. Well, here’s an update.

Volume Two of my daygame memoir is ready and has been for some time. I finished the final rewrite while sitting in a Bali coffee shop in the first week of December then sent it off to my layout designer. It takes a surprising amount of work to move from manuscript to final book. There’s layout, custom artwork, cover design and…..

“Just shut up and take my money!” you shout.

Okay. Sorry! I’m stuck out in Bangkok until the end of the month so I arranged to have a test copy sent to a friend in Europe who promised to look through it for printing errors. If he gives the thumbs up (that should come within a week) the book will be released. However, if Lulu fucked up the printing, it’ll be delayed another two weeks to fix any issues and order another test copy. I’ve lavished extreme care on this project so I’m not shoving it out the door half-arsed.

In the meantime, here’s the very first section from the book to whet your appetite. 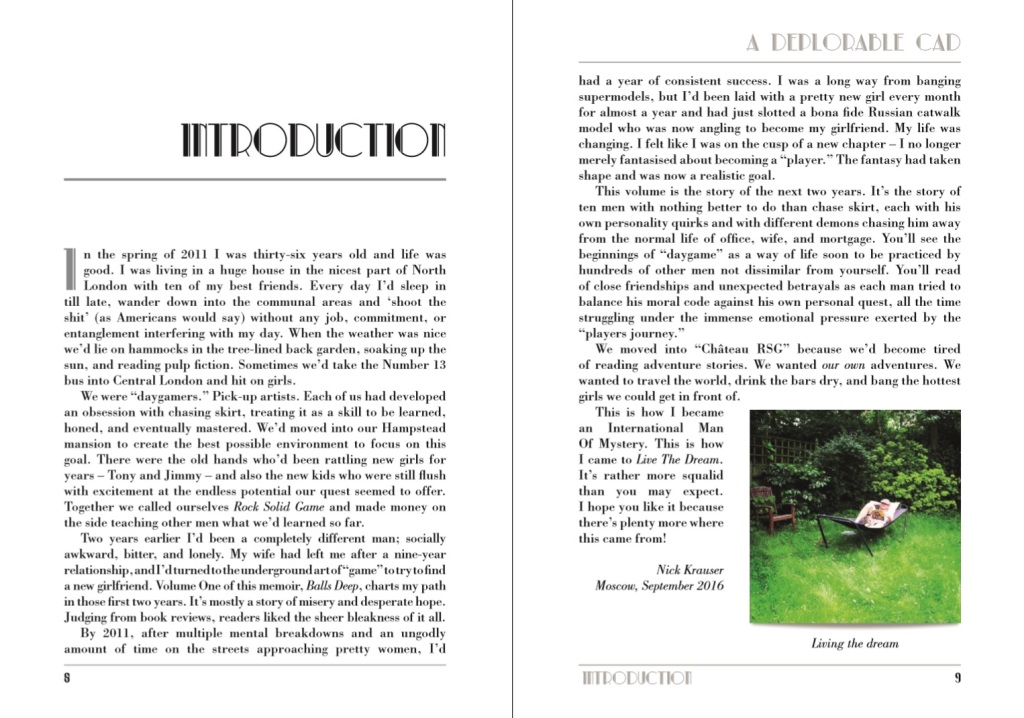 Introduction
In the spring of 2011 I was thirty-six years old and life was good. I was living in a huge house in the nicest part of North London with ten of my best friends. Every day I’d sleep in till late, wander down into the communal areas and ‘shoot the shit’ (as Americans would say) without any job, commitment, or entanglement interfering with my day. When the weather was nice we’d lie on hammocks in the tree-lined back garden, soaking up the sun, and reading pulp fiction. Sometimes we’d take the Number 13 bus into Central London and hit on girls.

We were “daygamers.” Pick-up artists. Each of us had developed an obsession with chasing skirt, treating it as a skill to be learned, honed, and eventually mastered. We’d moved into our Hampstead mansion to create the best possible environment to focus on this goal. There were the old hands who’d been rattling new girls for years – Tony and Jimmy – and also the new kids who were still flush with excitement at the endless potential our quest seemed to offer. Together we called ourselves Rock Solid Game and made money on the side teaching other men what we’d learned so far.

Two years earlier I’d been a completely different man; socially awkward, bitter, and lonely. My wife had left me after a nine-year relationship, and I’d turned to the underground art of “game” to try to find a new girlfriend. Volume One of this memoir, Balls Deep, charts my path in those first two years. It’s mostly a story of misery and desperate hope. Judging from book reviews, readers liked the sheer bleakness of it all.

By 2011, after multiple mental breakdowns and an ungodly amount of time on the streets approaching pretty women, I’d had a year of consistent success. I was a long way from banging supermodels, but I’d been laid with a pretty new girl every month for almost a year and had just slotted a bona fide Russian catwalk model who was now angling to become my girlfriend. My life was changing. I felt like I was on the cusp of a new chapter – I no longer merely fantasised about becoming a “player.” The fantasy had taken shape and was now a realistic goal.

This volume is the story of the next two years. It’s the story of ten men with nothing better to do than chase skirt, each with his own personality quirks and with different demons chasing him away from the normal life of office, wife, and mortgage. You’ll see the beginnings of “daygame” as a way of life soon to be practiced by hundreds of other men not dissimilar from yourself. You’ll read of close friendships and unexpected betrayals as each man tried to balance his moral code against his own personal quest, all the time struggling under the immense emotional pressure exerted by the “players journey.”

We moved into “Château RSG” because we’d become tired of reading adventure stories. We wanted our own adventures. We wanted to travel the world, drink the bars dry, and bang the hottest girls we could get in front of.

This is how I became an International Man Of Mystery. This is how I came to Live The Dream. It’s rather more squalid than you may expect. I hope you like it because there’s plenty more where this came from!