The trip to Croatia enters its fifth day and while I’ve collected a bunch of numbers, facebooks and instant dates I haven’t actually put my you-know-what into a girl’s you-know-where since I arrived. The streets are far busier on a Friday night and it’s rammed with top quality girls. We find ourselves sitting in a bar / cafe with Jambone’s prior night’s f-close. Just chatting and the vibe is great. I mercilessly DLV Jambone for half an hour in front of his girl much to his and my merriment so we are laughing and joking. It’s easy to open a pair of girls at the next table and bring them over. Both have stunning figures and reasonable faces, tits hanging out. That set is going great and my brunette target is IOIing and loving the vibe. They suggest we go to the next bar with them and then suddenly get a bit testy, wandering off. Jambone brings them back and we try again. This time as we reach a crossroads, Jambone’s girl (we’ll call her HB Harlot) impusively drags him the other way and both he and our host Spider follow.

What a fucking balls up. The girls see this and keep walking, turning their heads to give up the “follow us, little puppies” look and refusing to change direction to come with us. Jambone completely fails to spot the solution (drag his own girl after these two and then “convince” me to come along) and the set is dead. Can’t bring them with us and our value would be really low if we followed. A totally unnecessary compliance test that can’t be passed. Dead set. Thanks Jambone. 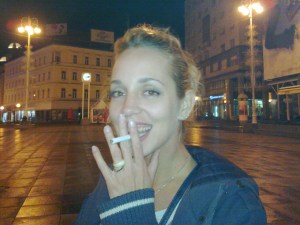 I grudgingly laugh it off – It’s only the second time Jambone has stopped me banging a hot girl this week – and we get drunk at the next bar. I go back to DLVing him with Harlot and we all enjoy it. There’s a group of three girls celebrating a birthday behind us and they are drawn to the energy until the tall blonde prod Jambone to open him. Relentless teasing ensues. Blonde calls me an asshole several times and punches me hard in the stomach – definitely an IOI. For about an hour we have Harlot buying me shots while I regal her with sex stories as flagrant verbal escalation and show her videos on my mobile phone of me fucking. Jambone is just laughing. Harlot gets horny and jumps him again which makes Blonde give him daggers. I turn to her and say “Aw! She’s all jealous now she’s lost” and her look is priceless. This is real full-on drunken douchebag game and she’s eating it up and giving lots of banter back. I’m starting to like her so I do a takeaway.

I leave her with Spider to practice on. He does a reasonable job for a guy with no particular Game but she’s just esconded in her seat and playing the Validate Me game. I give it half an hour or so to see if he can turn it around but it doesn’t go anywhere. So I catch her eye and resume business, immediately pulling her out her seat towards me to begin kino. She’s giving it plenty of verbals (“you’re such an asshole. I’ll never let you fuck me” etc) while the hindbrain is clearly signalling “Woo hoo, it’s on!”. So I just lead her along the path towards F-Town and I’m quite surprised her friends are leaving her to it.

The key moment comes when she suddenly needs the toilet. I let her go and when she comes back she just jumps into my lap (I’m on a high stool) and leans in to kiss. I neg her and she bites my fucking ear. Really hurts, the bitch. Soon enough I take her back to my hostel and the LMR is perfunctory. I have to bang her in the common room because there’s a girl on reception I’m gaming and the house rules don’t allow guests in the rooms. I keep admonishing my girl to be quiet but I’m expecting us to get busted any moment. Very good lay. She goes out for a smoke, I do her again in ways she claims are new to her, then send her home. Key learning points: