The first rule of Euro Jaunt Club is…..

My life in 2015 has settled into a familiar pattern. I hide out in Newcastle in winter, trying to get some work done, see my friends, and recuperate in preparation for the new season of travel. Then round about mid-March I begin to slot in little two-week trips to Europe to chase girls, with short breaks back in Newcastle between each one.

It’s working out well but like any big change, it brings challenges. By way of comparison, I spent 2012/13 living with the Rock Solid Game guys in London and splitting my game between the familiar haunts of London and short trips abroad. That was a lifestyle that had a solid “base” and a tight-knit group of friends seeing each other every day. By early 2014 it had broken up so I spent most of that year on the road, a month at a time in each destination travelling with mostly the same guys. That was a new flavour again, like being a nomad with a tiny travelling gang. Both patterns were good, but both had challenges. 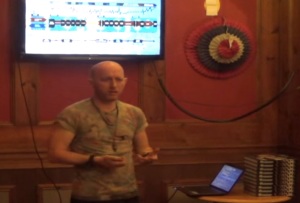 “It seems a few of you haven’t been following the first rule….”

So 2015 is different again. Much more “off” time with the family in my hometown and the trips have been much shorter stays in any given city, rarely more than ten days. I’ve noticed a much more extreme contrast between my on and off times. While at home I barely think of women except when writing for the blog or my business. I’ll maintain a trickle of WhatsApp / Facebook with my regulars but most of the time my mind is on video games, detective novels and the gym. The first week of this is blissful and by the second week I get restless and start itching to Euro Jaunt. I don’t know if it’s worrying or liberating, but “normal life” only works for me in bite-size chunks. I can’t imagine a life without foreign adventure.

On the plus side having such complete “off” weeks really keeps me connected to reality and it’s where I’m most productive. Skirt-chasing saps all my focus for normal stuff.

I’ve noticed a real sense of time pressure on my 2015 trips that was completely absent from 2014. When you’ve got a month in one city and the dedication to keep grinding, lays start to pile up. Cutting your stay to ten days completely changes the game. Suddenly everything is pull-pull-pull. It’s been fun but my results suffered. Good stories, hot girls, but not as many as previous years.

However the biggest thing I missed towards the end of 2014 and into early 2015 was….. quality male companionship.

It wasn’t until the grand RSG experiment broke up that I realised just how special it was to live in a big old house with all your best mates. Hanging out, drinking, training and hitting on girls together. Three years of that was a very special time. In 2014 the travel-gang thing was good too but a bit too game-focused rather than fun-focused.

Solo euro jaunting is wearing. The first real time I felt this was – of all places – in Brazil. After three weeks of isolation in Sao Paulo and Rio (much of it due to language barriers) I was desperate to get back home. I’d go out every afternoon to sit on Copacabana or Ipanema beach, sip caiparinha and just…. hate it. Too isolated. Too emotionally cold.

Those readers who have recognised me in the street and said hello this year may have noticed I’ve been far more approachable than my blog would suggest. That’s not an accident. By the middle of last year I’d started to realise that Euro Jaunting has become a “thing”. It’s not just the province of the daygamers with public profiles, or my little group of friends. There are lots and lots of men giving it a try.

Sometimes I want to cave their heads in with a big stick, like in Belgrade recently. But that’s just me and my little pet peeves. Really, stepping back and looking at it dispassionately, there are a lot of good guys out there doing it. Living the dream. Sure it’s a tough road but they are putting their money where their mouth is and giving it a go.

So I’ve been meeting up with a bunch of them and trying to cherry-pick the ones I get on with who would make good regular travel companions. I scratch your back, you scratch mine. Quality male companionship.

I’ve been really enjoying it. As much as I’ve been enjoying solo daygame this year I’ve found having a few cool buddies around massively blunts the sharp edges of Euro Jaunt weirdness. The type of Groundhog Day I complained of a few posts ago doesn’t hit so hard. The obsessive compulsion to grind the streets every day doesn’t get so vacuous.

So, Euro Jaunting is now a thing. We’ve created a monster. And I quite like it.