“You make a great tree” part one

I’ve taken a break from trying to set up an entourage as I figured I needed more work on the fundamentals. Plus, banging the Romanian has taken away some of my motivation. Then Wisdom calls me up and says one of the models he number closed last summer is putting on a launch party in a top club and wants us at her VIP table. Ok, time to rustle up an entourage.

I go with my recent leads, ones I’m not especially fussed over which are the following…… [romantic “meet” stories coming right up]

HB6 Black – I’m coming out of Meddlers bar at midnight on Thursday. Its a singles night so the RSG boys make an appearance to see how easy it is. Very easy. Only one genuinely hot girl there and Jambone closes her. Tony T has two of his tutorial students out and corals me into demoing sets. I notice I’m getting lots of attention on my shoes so I just open indirect with that – all the girls are here because they want to be opened, so it’s not hard work. I run through about five sets, hooking all but I’m not interested, when I finally lock in with HB5 Black. She’s loving it but says she’s not gonna bang me tonight and how I must be a “pro” because she saw me working the room. She had been tucked in a corner the whole time so I don’t know how she say it but there’s a valuable lesson in social proof. Later that night her chode boyfriend turns up so I reopen and do some heavy verbal escalation culminating in:

Krauser: [to BF] Fella, you know what the last thing she said to me was when we were chatting earlier? “I’m not fucking you tonight” then she takes a call on her mobile. I’m left sitting there with a great rejoinder on my lips but can’t get it out cos she’s yapping away.

HB5: [laughs] So you do want to fuck me don’t you [playfully, infront of BF who seems totally unconcerned]

Krauser: Not especially. Turn around and give me a look *she turns around, smiling, shakes her arse and kinos me*

Krauser: OK, shall I give you my honest, unvarnished opinion?

Krauser: [to chode] You okay with this? *he nods and smiles*

Another set has an unintentionally harsh neg. I’m chatting to HB5 Brit and she’s blathering on about how she loves her job as a union legal rep because she gets to stand up to big companies. I say “you’re not even standing up to me” (she’s much lower down on her seat). She gives me a shocked look and says “I am”. I look down and realise she is in fact standing, she’s just really really short. Like a leprechaun. Oops. I apologise but am careful not to beg forgiveness. She can’t stay away from me all night after that. Anyway, the long and short of it is there weren’t any girls worth closing.

On the way home me and Jambone are walking down Charing Cross road when I get what may be an approach invitation from HB6 Black. I run back and find out. Easy hook and facebook close. I tease her on her wall a few days later and then she accepts the invite to this launch party.

HB6 & 7 Koreans: I met one cute little throwabout girl in Covent Garden in summer. Seemed like a strong hook but couldn’t get a day 2, though to be honest I didn’t really try. When I was at the fashion party in February she’s supposed to come but at midnight when we are packing up she hasn’t showed. Walking across Piccadilly Circus with a clutch of model’s outfits over my shoulder I see HB7 Korean. I open and she says she’s going to a fashion party that her sister got onto the guest list of. Apparently some guy approached her in the middle of the street one day and he’s organising it. Doesn’t take long to figure out who that guy is. HB6 accepts my entourage invite and says she’ll bring her hotter sister. 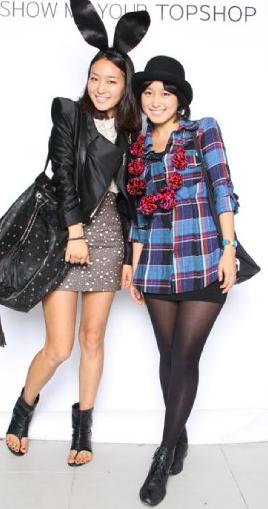 I'm praying to the god of threesomes right now

HB7 Aussie: I’m in a pub on Monday evening with 2 AFC mates discussing some drama a different AFC mate got himself into. I’m explaining how he did what he did because of a scarcity mindset (he’s hopeless with women) and how what you need is an abundance mentality. I say “For example, I know I can go out any time day or night and get some new phone numbers from hot girls”. At the precise moment I say it, HB7 Aussie walks past with her friend. She’s really tall and slim, almost six foot, with a lovely Kill Bill-esque fringe (the Japanese assassion girl). I say to AFC chums “like this” and run after her. Five minutes in and I number close, then walk back to the table with a big grin. I tease her a little on facebook and she comes along to my entourage night by herself.

I take this to mean "stick your cock in my mouth"

Lastly, after I did that coffee-shop sarge with HB8 Indian and an entourage night I met one of her friends HB6 Singer. She’s a fun girl so I’ve been working some light social circle game. She came out a second time but I never directly ran any game on her – no comfort, no attraction. But she’s 18, got good tits, and is generally agreeable. She’s been showing interest in coming out to stuff but flaked on one party and I flaked on another. The response I get off her this time suggests she’s really up for the night out. 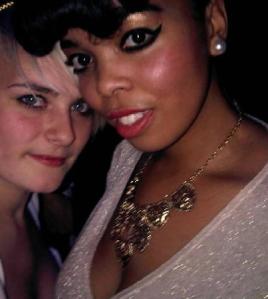 So, I head out thinking I’ve put together an entourage of six rustled up in under 24 hours. Opportunity for jealousy plotlines…..