Duck Amuck is a surreal 1951 animated cartoon produced by Warner Bros. and released in 1953 as part of the Merrie Melodies series and starring Daffy Duck, who is tormented by a sadistic, unseen animator who constantly changes Daffy's location, clothing, voice, physical appearance, and even shape. Pandemonium reigns throughout the cartoon as Daffy attempts to steer the action back to some kind of normality, only for the animator to either ignore him or, more frequently, to over-literally interpret his increasingly frantic demands.

From being a Nice Guy to dealing with Nice Guys, Daffy Duck in that particular cartoon, "Duck Amuck" perfectly illustrates the emotions of Nice Guy. For fun, pretend Daffy Duck is the Nice Guy and the animator, Bugs Bunny, is the girl. Hell, Nice Guys SOUND like Daffy Duck!

NICE GUY: Stand back, musketeers, they shall sample my blade! Touch
[suddenly realizes that there is absolutely nothing behind him]
NICE GUY: Musketeers? Unguarded, eh? My blade? Hey, psst. Whoever's in charge here, the scenery, where's the scenery? 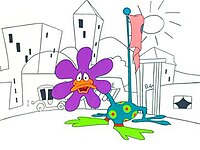 NICE GUY: [woman has re-drawn him as a weird flower-like creature] Hmm, that's funny. Somehow I don't quite feel like myself. I mean I feel all right, but I... I...
[sees himself in a mirror]
NICE GUY: EEEEEK! YOU KNOW BETTER THAN THAT!

NICE GUY: Would it be too much to ask if we could make up our minds, hmmmm?

NICE GUY: [after his parachute is turned into an anvil and he crashes to the ground, he is beating on the anvil with a hammer and babbling incoherently. While he is doing this, the anvil is erased and is replaced with a torpedo pointing straight up. After a few more hits, the torpedo explodes. Nice Guy finally shakes himself off] All right. Enough is enough. This is a final, the - the very, very last straw! Who's responsible for this? This... I demand that you show yourself! Who are you? Huh?
[as he's venting, a doorway with an open door is drawn around him, then the door is pushed closed by the eraser. The woman giggles, turns to the world, and says...]

WOMAN: Ain't I a stinker?