Connor McGregor Motivation: How âThe Notoriousâ Succeeded Where Others Failed

Just four years ago, Connor McGregor was picking up weekly $215 unemployment checks. Times have changed, his most recent fight against Floyd Mayweather on August 26 earned him over one hundred million dollars. How did a nobody who was often called a “waster” end up earning more money in one night than 99% of people earn in their entire lives? That’s the question I hope to answer in this article.

Learning what set Connor McGregor apart from the competition can help you understand the kind of thinking and action taking that will help you take your own success to the next level.

Defy Expectations- Create Your Own Footsteps 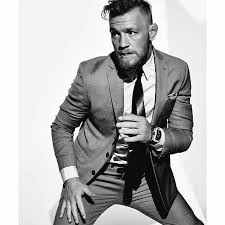 Between the ages of 17 and 18, McGregor worked as a plumber. He would wake up at 5 in the morning, work hard for 14 hours, and return home depleted. By all accounts he seemed destined to live an average life.

When Connor turned his attention to fighting, few people saw any real potential in him; there was no reason to think McGregor would be a success. And that’s why the first key to McGregor’s success was to defy expectations.

McGregor didn’t need a logical reason to believe that he could make a living as a fighter, let alone become one of the world’s highest paid athletes. Connor said, “I couldn’t look and say, hey this Irishman did it, I’m going to follow in his footsteps, there were no footsteps. I had to create my own footsteps and follow them.”

Naturally, most people take the beaten path. It’s much safer, anyone can take a safe corporate job and make ends meet. Most of us settle for a 9-5, we follow the footsteps of those who came before us and take a safe corporate job. But, as McGregor might say, “That is a very limited way of thinking.” True success starts with the belief that with enough hard work you can achieve any goal.

In an interview, McGregor was asked, “When you first started, if somebody said to you you’ll be as successful as you are now, what would you have said back then?”

McGregor’s answer? “I believe you.”

McGregor didn’t have his parent’s approval for his chosen path, few people he knew believed he could be successful, and no other Irishman had been a successful UFC fighter before him. But McGregor didn’t rely on the belief of others. In fact, he thrived on the fact that people didn’t believe in him.

Connor said, “I’ve been listening to them laugh my whole career. They’ve been laughing,

‘An Irishman winning a fight in the UFC? Hell no.’

Then the joker goes and wins a world title, and he wants to win a second title? More laughter.

Listen, the sounds of laughter and the sound of doubt motivate me. I enjoy that. I seek it. It drives me to go to the gym and put in the work.”

For many of us doubt is an enemy, it paralyzes us. We keep the safe job and stay on the beaten path because to do otherwise would mean facing the unknown.

Perhaps though, the few people who succeed think like Connor McGregor. Perhaps they feed off doubt and choose to see the risk as something to overcome, an opportunity to disprove the doubters, and to conquer their own doubt as well.

Connor McGregor largely attributes his success to hard work; not just in the gym, but outside it too. Like his former opponent Floyd Mayweather said, “McGregor is a businessman.”

McGregor said, “Hard work pays, I put in a hell of a lot of work throughout the buildup for this fight. I pumped out more content than anybody, more than Fox, more than ESPN. Daily movies I was releasing, nobody’s doing that. I’m very proud of it, hard work pays. I put in the work and that’s why I’m sitting at the top.”

I know a lot of people who are starting their own business, trying to make a living with their band, or attempting to make a career out of an artistic pursuit. Many people have ambitions, few end up realizing those ambitions. Connor McGregor has shown us the difference in mindset between a successful person and one who ultimately fails: the successful person treats their passion like a business, they see themselves as a professional.

McGregor aggressively marketed himself to become the biggest name in the UFC. Yes, he worked hard in the gym, but unlike most of his competition, he didn’t leave it at that. He worked just as hard outside the gym as inside of it.

Artists who starve don’t market themselves effectively, they don’t see what they’re doing as a business. They expect that somehow, they’ll get “discovered.” If they want to succeed, they must promote their work aggressively, put out content regularly, build a platform, and collaborate with people who already have a platform.

McGregor is among the many successful people who believe hard work caused their success. And although I know many people who have a “side-hustle,” I don’t know many who are putting in an impressive number of hours into their passion projects. They treat their band or online business like a hobby, putting in a few hours in here and there. They don’t put in multiple hours a day, every day, like professionals do, like McGregor did.

When asked if his obsessive lifestyle was unhealthy, McGregor said, “Do I look unhealthy? I’m in phenomenal shape, both in body and mind. To me what’s unhealthy is going through the same day every day of your life 9-5 in an office, that’s unhealthy, that beats your mind. I don’t work, I love what I do. That’s why it’s become a career for me, because I love it. I don’t think it’s unhealthy. I feel good in my mind, I’m living my life.”

Where others saw a lazy kid wasting his time with amateur fights, McGregor saw his future dynasty. We can all learn from his boldness- a quality that propelled him to become one of the most recognized athletes in the world. McGregor shows us what is possible when you stop looking for footsteps to follow, and decide instead to make your own footsteps.