The 7 Habits Of Highly Effective Players 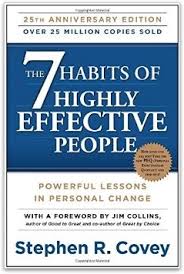 Stephen Covey’s book, The Seven Habits of Highly Effective People, is widely considered the greatest self-improvement work of all time, and for good reason.

Covey’s book stands out because it doesn’t teach tactics like, “Smile more,” and, “Listen well,” instead, the seven habits are about the underlying principles of success. If you understand -and live by- these principles, success will naturally follow.

In this article you’re going to learn the underlying principles for success with women: whether you’re looking for a girlfriend or a string of one-night stands, if you live by these 7 habits, your success is all but guaranteed.

Most people are incredibly reactive when it comes to dating, this is because the entire cultural narrative about love and dating teaches us NOT to be proactive. Love, romance, and sex are supposed to “just happen.” The very idea of a soulmate implies that you are destined to meet this one person who is a perfect match for you. In most cultures, love is something that is considered to be almost magical, even spiritual.

As a result, we are led to think that being proactive about finding and creating sexual relationships is mechanical and gross. According to our culture, love isn’t something you can create through your actions, it’s something that you have to let happen to you.

The whole concept of cold approach pickup is considered mechanical, slimy, and even creepy because it spits in the face of the notion that love is something that just happens.

Going out of your way to approach women (or men) to find relationships is unmagical, it’s making something spiritual into something scientific, cold, hard. But, to get the dating success you want, you must treat dating like a skill: something you can learn and practice. Being proactive means thinking less, and acting more. Thinking less about whether your looks, race, etc. matter, and spending more time interacting with women, going on dates, and getting rejected.

From Stephencovey.com, “Proactive people recognize that they are ‘response-able.’ They don’t blame genetics, circumstances, conditions, or conditioning for their behavior (or the results they get).” The truth is, looks do matter- but they’re not relevant. Nothing that is outside your control is relevant, all that can be gained from thinking about those things is self-pity and passivity.

Maybe your situation does limit your potential to bang supermodels, maybe the world isn’t fair when you aren’t a 6’4 male model. But, what does thinking about this accomplish? It gives you an excuse to be reactive: to let your external circumstances drown you(2).

If you want a better dating life, the first step is to be proactive. This means that you do what you can with what you have, now. You don’t wait for the perfect situation (I.E. when you have a high-paying career), you don’t think about your disadvantageous, you just throw yourself in the fire and try to make things happen.

It’s much easier to be reactive, there’s a lot of comfort in it. But, if you want results, you must learn to give up that comfort and replace it with action(3).

2. Begin with The End in Mind

See what I did there?

“Begin with the end in mind is based on imagination–the ability to envision in your mind what you cannot at present see with your eyes. It is based on the principle that all things are created twice. There is a mental (first) creation, and a physical (second) creation. The physical creation follows the mental, just as a building follows a blueprint. If you don’t make a conscious effort to visualize who you are and what you want in life, then you empower other people and circumstances to shape you and your life by default.(4)”

Not having an idea of what you want is like traveling without a map or a compass5: it’s pointless meandering, and you might just go in circles only to end up where you started. This applies to game as much as anything else, you should have a clear idea what it is you want to get out of your efforts.

Do you want a girlfriend? A harem? Do you want to travel to different countries having flings with women from around the world? What kind of girls do you want in your life? Is it mostly about physical attractiveness or is it mostly about an emotional connection for you?

The whole idea of The Secret [the law of attraction(6)] is hokey- visualizing a Ferrari isn’t going to manifest a luxury car into your life through the power of some magical force in the universe.

But visualization6 is actually a useful practice, not because of some spiritual law, but because thinking about what you want can help clarify what actions you need to take to get it.

Visualizing what you want is like marking an X on a map. By knowing where you want to go, you empower yourself to use all your faculties to figure out how to get there. There are different ways to practice beginning with the end in mind, you could make a habit of visualizing the dating life you want, you could write out your goals,7 or you could simply write a detailed description of your dream girl, what matters is that you have a clear vision of what you want.

Most people are extremely wishy-washy about what they want out of their lives, and that’s a big part of the reason they don’t accomplish much or have an exciting, adventurous life.

Beginning with the end in mind is about becoming certain about what exactly you want, so that you might actually get it.

(PS: In the footnotes, I lay out some more details about the practical side of beginning with the end in mind.)

If there’s one thing the seduction community does especially poorly, it’s that they do not put first things first.

And, if there’s one thing that stops most guys from attracting women, it’s that they think Win/Lose (without knowing they’re doing it).

Part 2 will be up soon, until then.

1- I chose the world players simply because it makes for a good sounding title, if the word has negative connotations for you, ignore it, this content applies to having a successful dating life regardless of your goals and intentions.

2- (https://www.youtube.com/watch?v=CjBQe90V_-U) Robert Green, author of the 48 laws of power was asked how he would define power, he said, “Most of the things that happen in life you don’t have control over, you don’t control your parents, where you’re born, when you’re born, what schools you go to, and then beyond that things happen to you, and the way I look at it, maybe 95, 96 percent of what happens you have no control over. It’s just circumstances coming at you.

3- If you’re wondering what action means, specifically, it depends on who you are, where you live, and what your goals are, but it definitely means interacting with women. It can be online, through cold-approach, through your social-circle, etc., what matters is that you are meeting women and getting out of your comfort zone by taking social risks.

5- You know, back in the day when smartphones didn’t exist.

7- Visualization can be done in any number of ways. For one example, if you want a girlfriend, you could imagine what she’s like- what does she look like, what does she act like, what do you have in common, what makes her really stand out from most people. If what you want from game is more general, say you just want to be confident around people and to have better social skills, you could imagine what that would look like, and the more detailed, the better. The point isn’t that imagining what you want will magically give it to you, but it will give you a sense of direction it’s only once you know exactly what you want, that you can start taking concrete steps towards getting there.

8- If you choose to write out your goals, I recommend following the system known as SMART goals, which means you make your goals Specific, Measurable, Actionable, Realistic, and Time Based. There’s a big difference in having a goal, “To get a girlfriend,” and, “Go on a date with a girl who I consider to be a 10 in the next month.”

Whatever goal you make, I would also write down the action steps, if your girl were to go on a date with a “10”, I would estimate say, how many girls you’d need to approach to get there starting today. Your goals don’t need to be perfect, they just need to give you a sense of direction and clear action steps.