I Can't Even, or; telling better stories 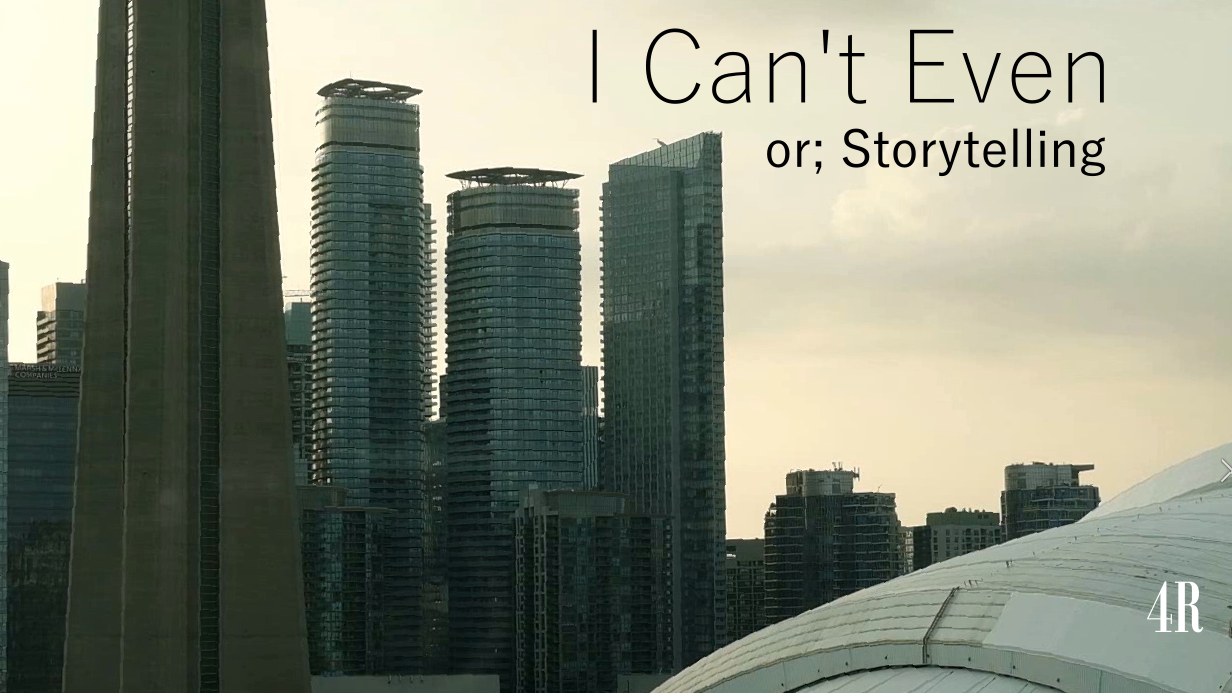 I can’t even. The worst thing to hear when you’re trying to have fun with a girl. Click the image to watch the video

This is a post about storytelling. Whether it’s a wife, a potential plate, or even general charisma with friends and co-workers, it’s an important skill set. Marshall McLuhan had a great insight into hot and cold communication. A quick summary, television was a hot medium, and we only had to sit there and take it in. Books, radio, conversation, all cold mediums, they require our grey matter to engage, imagine, connect. As we move away from television and onto the internet, we are moving back to cold communication methods, and in some ways, it’s helping us. In this case, it’s helping guys talk to girls without having to stare at the girl fingering her phone. It’s hard to talk to someone that isn’t there. It’s harder to give anyone good advice.

If you can get past that first hurdle where they think ‘who is this douche? Where does he get off saying anything?’

If you can get past the second hurdle, where they think ‘this is nothing like the thing I am doing to fail now, I don’t trust it’ll work any better!’

Then you get to the third hurdle, where ‘this thing will work OK. I’m going to blindly follow this advice, to the letter, without any thought behind how I do it. If a little of it will work, doing it to the exclusion of everything else should be, twice as good!?’

I was talking with my girl, and by talking she was giving me the gears because I ruined dating for her. Never mind that none of this is true, the useful part came when she said why. It was something I told her when we were first dating that ruined it for her. ‘People have boring uninteresting lives and can’t even make it interesting when they tell you about it.’ Her friends were boring, my friends and I weren’t boring. Sometimes our adventures were boring, but when we were telling stories they never were. Supposedly she’s never been able to do small talk, even her work friends, it’s just mouth noises now.

I think guys take the advice of ‘being more interesting than whatever she’s fingering on her phone’ to the extreme, and either dance like monkeys, or refuse to even tap their feet. It’s not about entertaining someone for validation, it’s not about what they used to call ‘dancing monkey game.’ It was to be charming. Charming people tend to have interesting people and uninteresting people genuinely like being around them. We are social creatures which is difficult when no one can stand you for more than a few minutes. If that sounds like you’re entertaining, so be it. It beats social isolation, depression, and rubbing one out to anime girls while drinking a thots bathwater at $35 a pop.

Girls are bored and the ones who aren’t bored are stressed because of some deadline someone made up for them that they will never meet so that their boss can meet the directors arbitrary deadline that doesn’t matter while the project gets cancelled next week anyways. Girls are stressed, bored, validation seeking, all roads lead to Rome. Learn to string words together without pissing people off.

Those aren’t interesting, they are interests, they are set pieces.

You get the idea. When I was going out to pick up with friends, when I was heading out into a foreign port to party, I made up a job, everyone did. They were golf pros, they were pilots. Some actually were pilots but they flew Sea King’s so it’s not a brag. Look it up and come back to see why it’s funny.

I on the other hand, I was an accountant. No one cares about an accountant or what he does, and that was the way I liked it. I had to stop making that job up in April, as girls kept telling me they needed help with taxes. I guess they don’t make thots with the fiscal prudence that they used to have. I went out in a Nissan Sentra. Chicks get wet for a man with fuel efficiency and 4 doors. I never rented a fancy car, I didn’t go broke purchasing a body kit for my Eclipse. Just a simple 4 door sedan. Any girl who met me saw a guy with a boring job, a boring car and who never went everywhere. In real life, I was a sailor and had been everywhere. They didn’t care about that, why should they? They didn’t get to go. I never got to tell all those stories about how great I was, those would be boring. Just like the guy that they just had a date with before they ran into me.

Instead, I was present, in the moment, and the stories were relevant. The stories were told with some energy, a little passion. I made up the most boring life I could think of. When I had to talk about something I had to ask questions.

• Why was this girl out by herself?

• Where were her friends?

• Why is there a wine stain on her summer dress?

• Why is there a tattoo on her neck?

Tease her a bit about having lame friends, tell a story about how you learned to remove wine stains so you could save a 2 thousand dollar damage deposit on an apartment. People-watch with her and point out how silly everyone else was. It’s us versus the world baby, just us in our private little slice of life.

Guys are very good about talking about the past, talking about the future. Most guys I hang with will either tell me stories that start with ‘do you remember that guy who?’ or ‘man it’s going to be awesome when I ...’ Guys tend not to be good at talking about where we are at that exact moment, at being engaging, at being present. If you’re out with a girl you want to have a subtle, sexually charged story, but if you’re boring, no one cares about innuendos. If all you can talk about is how great you are, the only takeaway she has is,

You can be ‘I can’t today, but lets do this next week?’

You can be ‘I can’t, my boyfriend is in the next room’

You can make things up, you can run your mouth about almost anything, just be engaging. This isn’t just a dating thing either. If you’re boring like this with your wife, you’ll notice your bedroom starts to become a chore, if not for you, for her. Rub your naughty parts together, repeat for 5 minutes, watch some YouTube, subscribe to PewDiePie, go to bed. If that’s your life, I feel for you, I really do. You’re capable of so much more, and it’s not that hard if you work at it. Ask questions.

“Where did you get that wine stain?” Find out that girls friend god sloppy on her birthday and spilled before the police threw her into drunk tank? There’s your premise, go tell a story:

“You should thank her, you’d have never met me!” And what makes you so special?

“See I paid your friend 300 dollars to pretend to be drunk and spill some wine on you. I’m actually testing out this new washer and dryer in my place, but I didn’t have anything that stains at home, so I had to come out and find someone here.”

Ok, that one is not very good, but the idea is sound. A good story often sounds weird out of context. So long as the words make sort of sense and you’re telling it with great body language and lots of energy, no one will care. No one will care it’s 100% made up. It’s fun and you sell it, you sell it hard. Big smile, lots of smiling. When you want her to pay attention you put your hand on her arm. You look very serious at the serious parts, then pause and pull back, laugh when the serious parts turn out to be nothing. Devil may care is your modus operandi. If your life is genuinely interesting this becomes easier, but if you want to be really good? Be able to make nothing, interesting.

Maybe you suck at stories, that’s fine. We don’t all have campfires and peyote. Take an improv class, they are great about thinking on the spot. Go to an open mic night and practice your 15 minute set on stage. Toastmaster, or just go to bars, coffee shops and be social. Practice and fail the old fashioned way, by practicing and failing.

You’ll notice, the more you tell stories, the better you get at them, the more interesting you become, and the more engaged people are. You’re present, you’re there, they are there.

‘I can’t even’ becomes ‘you can’t even stop listening can you?’

You aren't lying, you’re not manipulating, and before the moralization comes out, no one is besmirching a girl’s honour to enjoy a few hours of sport fucking. This is to illustrate a way to be charismatic and entertaining. Telling a girl you want to be her boyfriend while stringing her along is going to blow up in your face, as is telling a girl you aren't married when you are. If you take this as a license to lie and cheat your way into the bedroom, all I can say is it won't work, and you'll probably end up #metoo'd, and most likely deserve it. Well, lie if you must, make the lie so obvious that she opts in. Girls like honesty and they like plausible deniability.