Vetting, Part I: Men do not know what they want 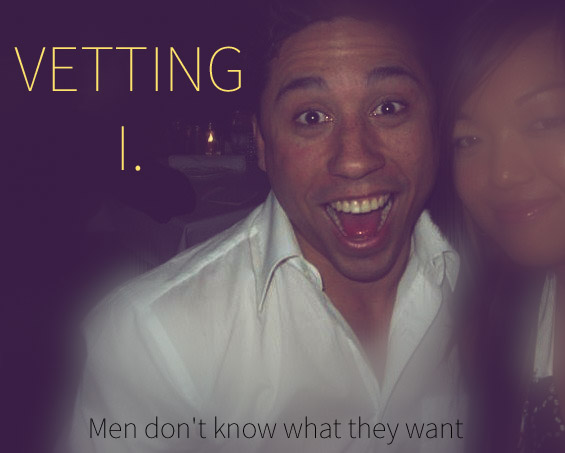 I was too young to know what I wanted. friends would hook me up with their friends, this was the single worst date I had ever been on…

Men do not know What they want in life. The idea of taking a man at his most inexperienced and encouraging him to develop a list of qualities that give him the best choice in a long term relationship is naive. Vetting is touted as mitigation of risk, but risk is a wonderful container word that we can fill with whatever feelings we want. What exactly is a man risking?

Is it about the risk of losing so much time to a poor connection? Men age well, and assuming their lives have been a constant path of improvement in the ways that matter most, we don’t lose so much time that our lives will end alone in a house of cat food at boxed wine. A strong theme is that men are being raised as defective women, and the idea of men aging like women, approaching that wall where we transform from young virile men into cold angry spinsters is a female insecurity. Men in their 30s, 40s, and 50s, with the assumption that putting in a modicum of effort are constantly growing into more valuable men, have many options throughout their lives. If a woman were to pull the plug, men are in a far better position to trade up in life. The amount of women who desperately search for high value men is at an all time high, we only need to reach out. A large part of having longevity in a relationship relies on a man being a womans best option. If you are one woman’s best option and she forgets, you can be another woman’s best option.

A real risk exists, in that a man can lose access to her children. Men cannot have children, they can only sire children. We get to be involved in the child's life at the behest of their mothers. And while this sounds callus, one of my mentors in this space gave me a wonderful piece of wisdom. “The majority of time you spend with your children will be with them as adults.” I should hope a mans primary concern with life isn’t his ability to babysit the kids, or coach a little league game for their sake, since we know it’s to soothe his own soul. The risk is in not being able to watch them grow up, or to be unable to raise them in the way you wish you were raised as a child. You weren’t raised that way and you turned out alright, which makes my point. Many of us had fathers who didn’t get to watch us grow up, and made up for lost time when we got older. I never got the privilege, my father died just before I turned eighteen. I’ve never held that chip on my shoulder, I turned out alright

The risk is ones ego. Most men who tout vetting as a relationship strategy tend to be early into their relationships. It’s not that a man knows it works, it’s that he hopes it worked, even though it was largely guesswork and coming to terms with the person that took interest in him.

She had a specific type of man she could attract, and we let life happen to us.

And this is why vetting does not work. Vetting implies we are taking control over our lives, and in reality, most men are letting life happen to them, and vetting provides a narrative that allows a man to pretend he doesn’t sail to wherever the winds decide to take him. For the inexperienced man (most men) he doesn’t get to decide, others will decide for him and he has to come to terms with that, hence, vetting.