Vetting, Part II: Garbage in, garbage out; or, whose values are you using? 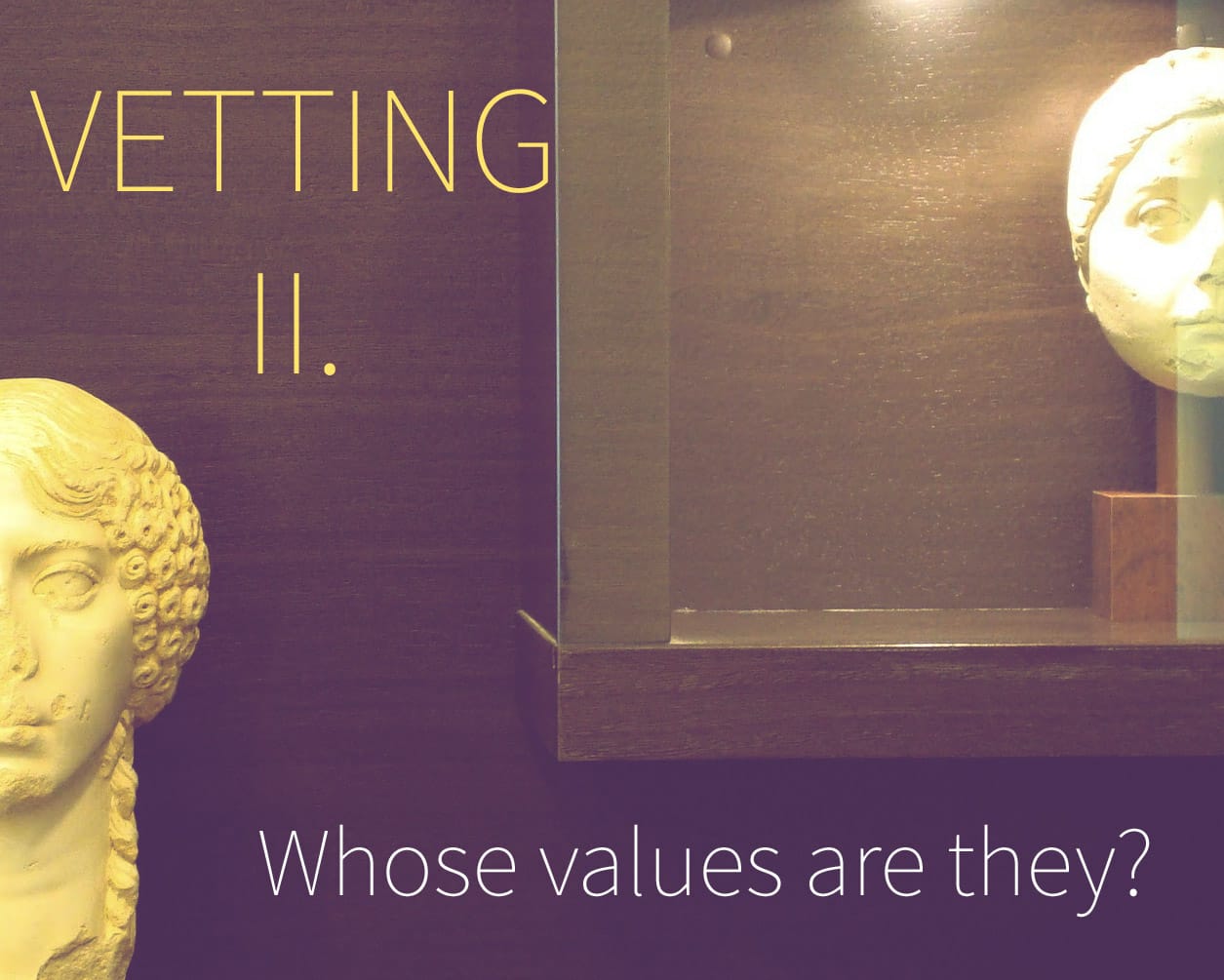 Split, Croatia. An entire museum section on the women of antiquity that shaped modern society

It doesn’t help that men are attached to wonderful container words such as: valor, honor, sacrifice, hardship. Military men are familiar with the phrase ‘Embrace the suck,’ as much of a military mans career is about enforced hardship in order to achieve a higher goal. It feels good, so many civilian men love to pretend their ability to keep a woman is akin to fighting the Nazis in Normandy.

“Sure, I would have served if it wasn’t for these flat feet, embrace the suck, Susan.”

Those container words are filled with values. A list used for vetting is a checklist of values, and those values did not come out of a vacuum. Men are not born with values inherent to them, they have to be taught, they have to be instilled in him. Who are the gatekeepers to values? Increasingly this is the pervue of women. Women create values, values by women, and for women. They may benefit a man, but in any situation where the values that benefit a man contradict the values that benefit a woman, the womans values win out, always.

The values in a mans life, the ‘should wants,’ or the ideological structure (not root words idea, ideal, logical.) Find me a social structure that creates these values that isn’t heavily influenced by women, and I’ll show you one that is about to. Women have invaded every male space and taken it over, often to the thunderous applause of the thirsty men who are happy to have the validation of their feminine gods to shine upon them. Paleolithic men loved to have structures that encourages women to join them, since women meant tribal longevity. That primal instinct is totally unprepared for a world of almost nine-billion people in peaceful societies removed from all natural threats. A mans deference to the female imperative is the diabetes of our value system, too much of a good thing is bad for us.

Men aren’t able to teach men anymore. The decimation of the family unit over generations has all but removed the man from the household, replaced with a substitute teacher father, who has Damocles sword over his head should he want to establish boundaries. “You’re not my real dad!” Right, his job was outsourced to cheap dad 2.0 labor. Pedophilia has pushed our removed many male teachers for young children. When I was a child I had a half a dozen male teachers before I got to high school, my nephew has none. Of the fathers that remain (half of the biological and step fathers) a great many are emasculated to the point of being wonderful feminist allies, codependent men who aren’t in a position to lead themselves, let alone lead the next generation of men to some measure of happiness. I know this because my generation wasn’t lead, and now we are in the position to pass on the lessons we didn’t learn to the generation that won’t stand a chance. I have a feeling a lot of dads will disagree with this and it warms my heart. You’re part of the solution, and this isn’t about you. The kind of person who reads this is so rare as to be a statistical outlier. I also know many of those dads are insecure, class conscious patriarch wannabes, the emperor wears no clothes, but one desperately needs him to be in a parka in order to convince himself that he’s happy.

There used to be other institutions that offered guidance outside the household. Church used to, though the pastors are now pastoresses. The church is running out of spaces for men so they coddle the women. It’s a common trope that the worst of women seek the church for absolution, and the church promises to get the flock to ‘man up and marry those hoes.’ Can you tell me that the church will fill mens heads with virtues that benefit him above all?

So without the influence of men, a cadre of women are spending the child's formative years instilling their feminine values onto him. It’s not malicious, they don’t know any different, nor should they. Men are raised as if they are women, is it any wonder they come out defective? The emasculated dads, the 2.0 not my dads? They are the cheerleaders, the allies. They parrot the same feminine attitudes and may as well grow breasts and own the role.

So the needs of women are preached to men when they are young children, unencumbered by the needs of men. They are increasingly being removed from the household, the schools, and the churches. More and more women are spending more and more time around children, and raising men as if they were defective women, instilling the values that most resonate with women. We cannot expect any vetting to overcome the underlying values that created it. Though it does make women have a much easier time identifying these plow horses, looking to hardship and sacrifice for their next fix. First hit is free.