Vetting, Part IV: Narcissistic fantasies, rage, and being zero'd out 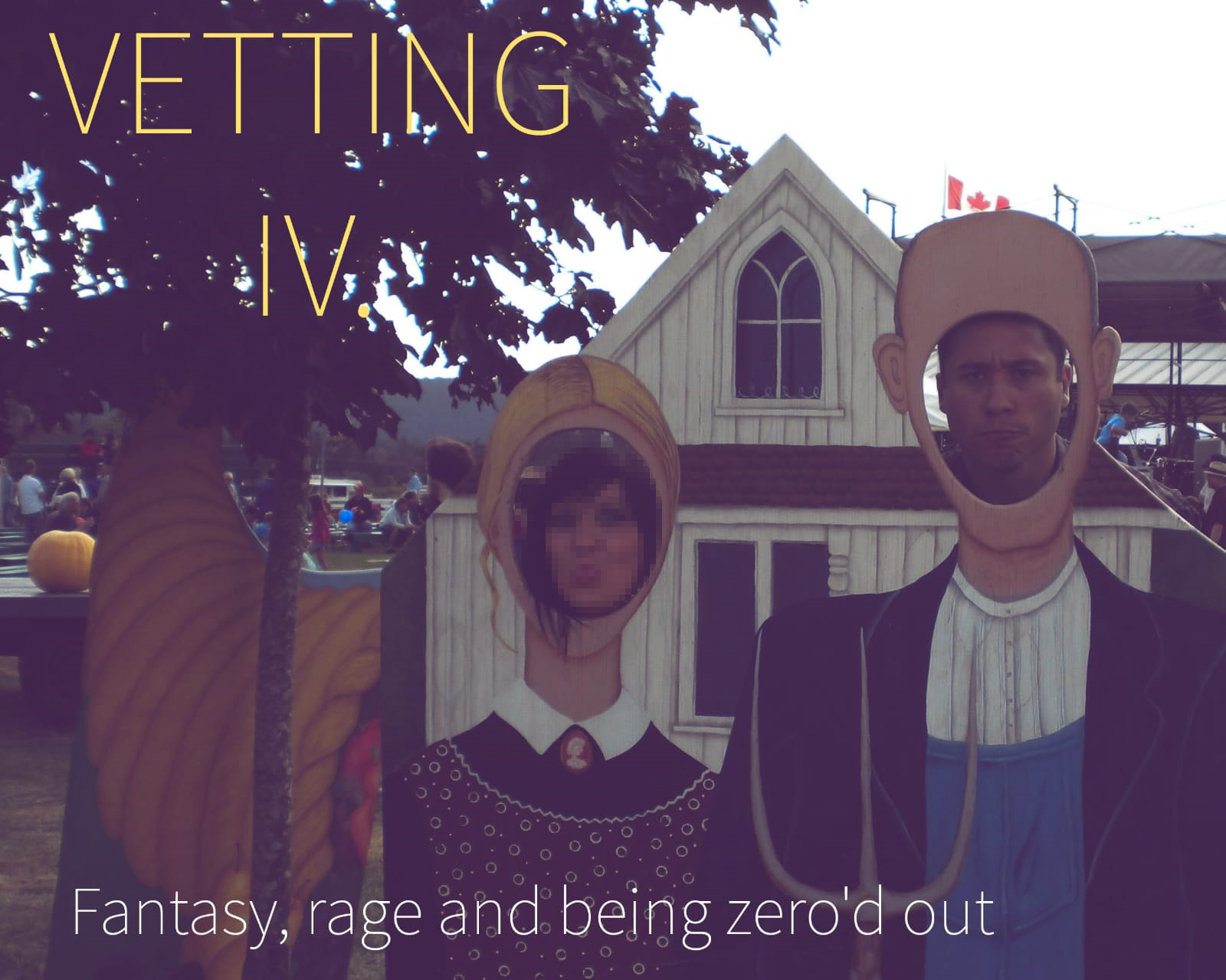 In reality, vetting only serves to obfuscate the real people involved, encouraging masks, slowing down the period of getting to know the real person behind them. By the time the masks come down, it’s too late, the vetting has done its purpose already and it’s too late.

Earlier, when I suggested that the values that underlie a vetting checklist are build by women, for women? This couldn’t be any more clear than in seeing them work in practice. A man who is vetting a girl for a relationship doesn’t hide the fact he’s vetting a girl, in fact most men can’t shut up about their damned checklist. Two types of women will hear it, the first kind is the woman who has options, she sees one guy with a huge list of what she has to do, a shopping list to which the common answer is ‘you can’t tell me what to do!’ And she’s right. Any decently attractive young woman today doesn’t have to listen to a man ever, and no man has the ability to incentives her otherwise. The only tools he has are his value, and the tall buff guy on Tinder is much hotter, and has a much shorter list of criteria and he will win. Even chasing him will win, a mans list just isn’t any fun. However, once a woman has gotten to the tail end of ‘I wasted my 20s’ and wants out of the sexual marketplace (or worse yet, the sexual marketplace asks too much of her to continue) those same guys are sitting there with their lists. Clearly they are really good lists, look at how many women didn’t meet their criteria? No worries, girls have known whats on that list since they were seventeen. They throw away the bar dresses, grab a sun hat and a summer dress and take a few Tinder phis in a wheat field. Make sure she braids her hair and always stare:

Every man who played the field in his 20s and 30s knows these women. He’ll scroll through social media and see the girl he used to call up when he struck out on a Friday night, all of a sudden her bio looks like the Little House on the Prairie. “Wait, is this the same girl who I watched deep-throat a whiskey bottle last month?” No, it’s the virginal good girl who just wants a relationship, to settle down and have a family. And Norman will look at his list, look at her, and be so impressed with his luck.

“She is exactly what I’ve been looking for, she meets the list 100%” of course she did, when you follow the recipe you generally get the same dish as the one on the picture. She may believe that’s her now, shes highly invested in believing it, so why wouldn’t she? And for a year, two at most she will be. But the thing about masks is people cannot wear them forever. At some point she reverts back to her normal self, and the guy looks at someone who doesn’t resemble the girl on his list anymore. His ego will hide that from him, for a little while, but you can’t keep that up forever either. How do I know this so well? Hundreds of these guys are finding their way to this space via a Google search that has some variation of:

‘Hey Google, why won’t my wife have sex with me anymore?’

And it’s not just the girl wearing a mask either. The guy has his own mask, the one of the great guy with high standards, he’s loyal, he’s committed, and his greatest goal in life is to be the father of her children. It’s a narcissistic fantasy. He doesn’t want to raise a happy child into a functional adult, he wants to be a dad, and those aren’t the same thing. It’s OK if you don’t know the difference, because your kid will. Meanwhile the man gets to live his narcissistic fantasy, for a little while. He spent his adult life searching for this perfect woman, that value list stapled to his head like a party game. Read my wishes, fit the mold, and get what you want. Once a guy gets there, it all starts to sink in. His identity was created by women, for women. It’s not natural feeling. He may not know why he has this narcissistic fantasy, but after a while others go off script, others start to act like they have their own desires, their own values, and their own incentives to act in their own best interest. This isn’t supposed to happen!

After the first child, maybe before, maybe after, the girls honeymoon phase, or her mask comes off. Once it comes off she looks at that man beside her and realizes he doesn’t measure up to the kind of man that got her wet. She just doesn’t feel like it anymore, so she stops being his fantasy, his symbol to fetishes. The sun hat is replaced by a pixie cut, the cunt dressed replaced with a moo moo, the sweet femininity is replaced by a nagging battle Axe. The marriage is often replaced by a wealth transfer via divorce and accusations that he abused the kids. Never mind it’s not true, the courts have to act in the child's best interest, best not to take any chances! And once all this sinks in, the guy passes by any opportunities to take his balls back and start becoming an advocate for his own best unrests, once it’s too late, he finds out he’s been Zeroed Out.

This is narcissistic rage. It’s not pain, pain is when you drop a hammer on your foot. It’s not anger, anger is when someone else drops the hammer on your foot. Rage doesn’t make it to the frontal love, narcissistic rage is the limbic brain realizing that others aren’t adhering toe the narcissistic fantasy, they aren’t acting as the symbols of that fantasy, and the man can no longer fetishes them as set pieces in his one man play. Norman: The musical, no longer showing. This rage manifests in many ways. A man turns to the bottle, a man turns to nose candy, or turns to a barrel in the mouth. The lucky only rewrite their narcissistic fantasies, plume the women for daring to have agency and looking quickly for her replacement. Repeat until dead, free sandwich if you get the marriage card stamped 4 times.