Can a BROKE or JOBLESS Man Still be High Value?

The more jaded and less innocent you are, in general, the more likely it is that you may laugh at the idea that a broke man could be high value.

The less jaded you are, in general, the more likely you are to agree that it’s possible for a man to be broke, jobless and still be high value.

Knowing that so many women have been stuck in bad relationships footing the bill for toxic and unambitious men, I don’t take this subject lightly.

I know there are bad quality men out there with zero gumption or integrity, who don’t mind living off a woman financially – long term.

But these character traits are independent of monetary wealth/money.

Sometimes when I say this, some women say I’m naive.

I sometimes ask them if perhaps they’re jaded or resentful.

If you are capable of objective thought – if you CAN remove yourself from all the pent up emotion you have from the past with toxic men (because boy I know it’s hard after everything you’ve been through), then maybe, just maybe, you’ll see the little flicker of light in the darkness…

A broke and jobless man can most definitely still be high value.

A man who is broke isn’t automatically low value.

Where do you think the value of a man really is?

Let me ask you a couple of quick questions:

Is money more important than ambition?

Is money more important than resourcefulness?

Could having lots of money really turn a man who has no integrity into a man of integrity and high value?

Could a “rich” man have scammed a bunch of people, made millions in cash in a few years, only to end up in jail for 15 years for his heinous crimes?

Someone smart by the name of Tony Robbins once taught me that money is a magnifier; it doesn’t change the essence of who you are as a person.

Do yourself & your future family a favour: know that money buys a bit of comfort & freedom, but it can’t raise kids & it can’t buy resourcefulness, ambition, commitment or a quality pair bond.

David & I have taken our children around the world with us in first class, we have every bit of freedom & “comfort” that we worked hard together for, but had I looked past him based on his poor lifestyle, crappy car & crappy clothes that every other woman judged him for 15 yrs ago, we wouldn’t have made it here together.

Money is no insurance against poor character, a lack of resourcefulness and a lack of integrity.

If you date for money, not love – you foot the cost as a woman.

What I foolishly didn’t realise until my husband taught me the lesson, is that so many of us often have no clue that the value in life is not just in the comfort you can get for yourself – the real value is in what substance and lasting VALUE you pass onto the next generation.

There’s no use being rich, if your children turn out to be insecurely attached, weak, entitled and have zero depth of love and secure attachment to pass on to THEIR children.

There’s no use being rich and spending 99% of your time chasing wealth as a parent, only to find out that your children inherited your cash, but no skills in adding value to the world.

You can throw money at your children, give them what they want and they turn out to have no understanding of currency, economics and how to accumulate true wealth by themselves.

See, I’ve been working with women long enough to know that if all else were equal, then given the choice between a self-made man and a man who inherited riches, they’d almost always choose the self-made man.

So, all women intuitively know there’s far more value in a man with a strong masculine direction, ambition and substance, yet we often lose sight of that.

When we are fearful, we are quick to judge and push away a man based only on his job status and his current earnings.

As you would already know, there’s more than meets the eye.

Never forget that some of the truly smart and rich men will choose to dress down, to be inconspicuous and avoid being targeted by value-sucking women who throw themselves at them.

So, of course it’s your life, and you know your situation, and your needs better than anyone else does.

Perhaps you’re over 50 and you’ve been through it all, and you’re done with jobless men. I understand. Yet still – don’t confuse joblessness with a lack of resourcefulness.

Don’t confuse joblessness with a lack of masculinity.

If possible in your dating life, enjoy yourself, learn all your lessons, make all the mistakes you need to make – but never stop learning from them, never put blinders on and only think on the surface.

You won’t believe the amount of women in their 30s and 40s I’ve heard from who wanted to get married and have a family – and so had to choose between two men quickly.

Usually it’s a similar scenario for them all – one of the men had money but their connection was not there and one of the men didn’t have the money or lifestyle, but the connection was there – and they often regret choosing the one with money because even though they thought it was best for their children and lifestyle at the time, they’re now living unhappy lives, or perhaps even divorced and parenting their children in a very different way than they assumed they would be.

Don’t get me wrong – sometimes we have to make difficult decisions. We can’t have it all at once and the world we live in is far from ideal. So who am I to judge a woman who was forced to make a difficult choice?

But do take care of your feminine soul – it needs more than money. It needs to be opened to love by a trustworthy man, it needs to surrender to bonding, to love and connection. Without these things, you’ll feel an enormous lack down the line.

And so don’t close your heart to a man based on his car, clothes and job status before you get to test him and get to know him for real.

Don’t be surface like perhaps your scaredy cat, judgemental, jaded female acquaintances are.

Look deeper, feel deeper into who a man really is, even through your own fears.

Try your best to be more patient, think long-term or better still, if you can – play the long game, rather than the game of instant gratification like so many other people in the world do.

I want to love you and leave you with a quote I recently shared on my instagram: 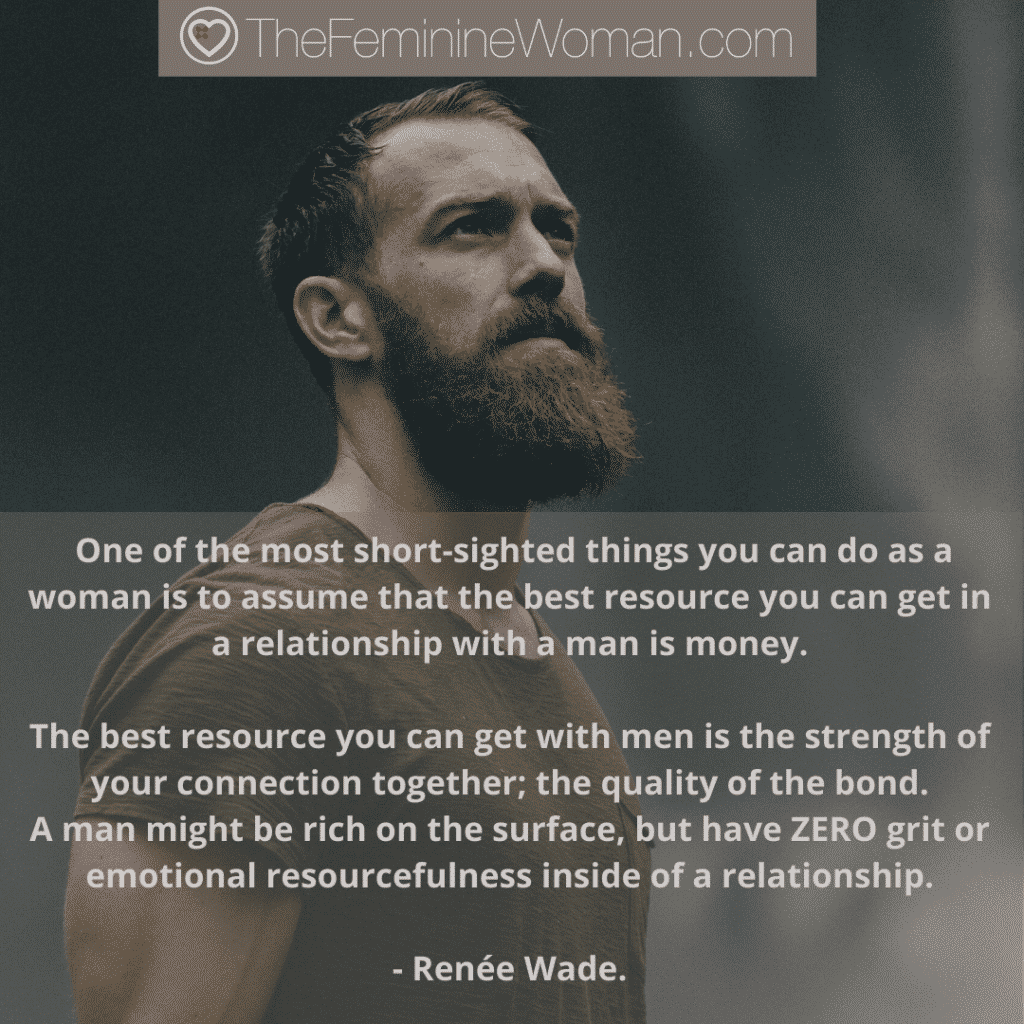 P.S. Connect with me on social media

P.P.S. Here are 7 Common Signs A Woman is Low Value in the Eyes of Men.

TheRedArchive is an archive of Red Pill content, including various subreddits and blogs. This post has been archived from the blog The Feminine Woman.