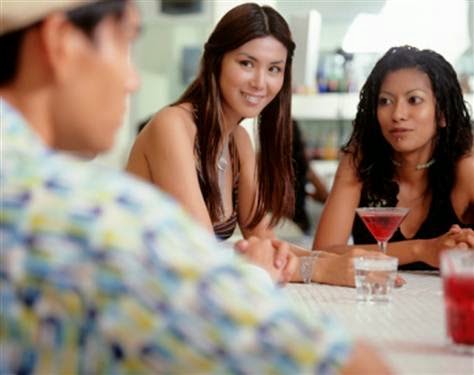 For all the myths that women are more intuitive, more social, more emotionally intelligent, aware of feelings etc., it is all basically a lie.

The bottom line is this: Men don't actually make the first move... women do.

They signal openness. Or rather, they are supposed to. Then an interested man will signal his interest to approach, usually by looking her in the eyes and smiling. A normal man won't apporach unless invited. If a man approaches without being invited it either means he is a psycho or he is one of the few men that have learned that women just don't get it, and he is compensating by testing the waters more aggressively. Yes, a lot of men don't know the steps to meeting a woman and, as a result, are socially awkward and have trouble meeting women (even when she is highly interested). This lack of skill leads to lack of confidence which then becomes a vicious circle.

Part of the problem is women are just as clueless about doing their part in the meeting ritual.

But, the biggest part of the problem is most women are completely out of control of their own sexuality. What I mean by this is, rather than deciding beforehand what she wants and then figuring out how to go about getting it, she tends to instead shut down. 90% of the time, and she is completely uninterested in any partner. That's a big problem because (most) men hunt and women choose. If 90% of the time that choice is no to anyone, and she is unaware of what she is doing, the chances for success aren't very good. The other 10% of the time, she gets overwhelmed by her needs (hormonal and otherwise) which forces her to be open to men who aren't a good match... leading to the ironic perception that there are no good men (ie no men who are a good match for her) Even though she is surrounded by them. Add in that most women put themselves on sexual display with the way they dress but shut down all signals of interest and the stage is set for some pretty fucked up behaviours.

In short, neurotic behavior in both men and women, lack of knowledge and lack of skill are at the root of the problem. Add in the fact that the relationship is mostly and illusion from the woman's point of view (ie she can and will walk with no notice and no reason at all) and you have a highly unstable situation where nobody is getting their needs met.

To fight against this, people have to study the situation and bring what they are doing into conscious awareness, and focus their will on making changes. 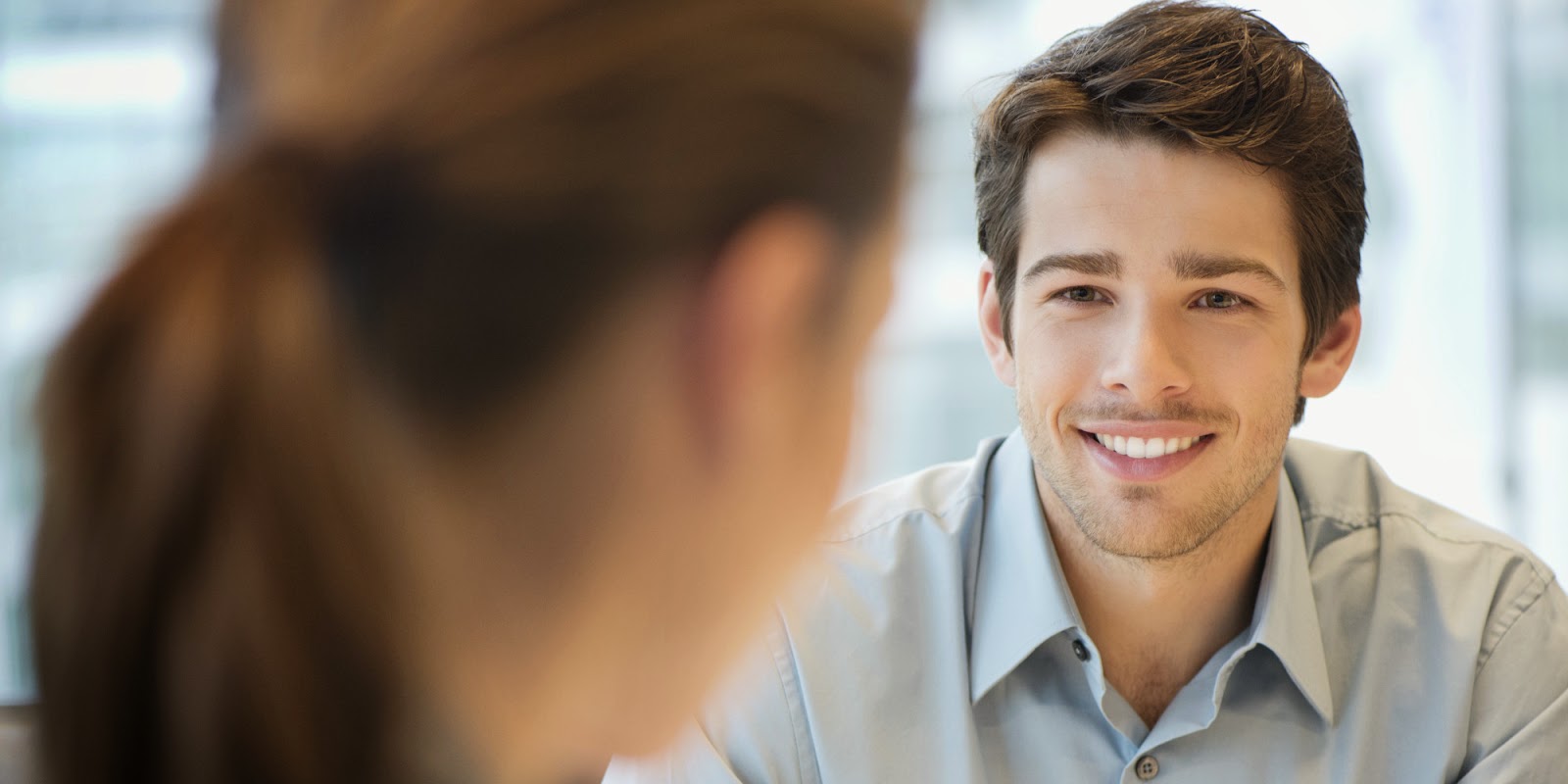 For example, I discovered that even though most women won't signal interest, a man can provoke her by skipping a step. Simply looking any woman you meet directly in the eyes and seeing if she looks back, and then smiling if she does... this forces her to say yes or no with her body language. That's an aggressive thing to do (in non-neurotic cultures, women signal first, not men) but it is still in the realm of acceptable behavior. Men going, "hey, baby, hey baby," while you are trying to get to work, or worse, approaching when you make it clear they are not welcome, isn't acceptable. It means the guy is either a dumbass or a psycho. Unfortunately, alot of women are open to them during their 10%.

As a woman, it is extremely easy to get around this. First, choose who you want. Then, do what a man would do. Look him right in the eyes and smile. You might have to do it several times if he is a dumbass. He'll usually approach you unless he is taken.
.
Advice for Women on Inviting Guys to Approach You
.
You need to understand that women in this country are completely socially inept and have stopped all relationship starting behavior. That leaves the field wide open for you (a woman who knows what she is doing) with little to no competition. See a guy you like? Look at him and smile as an invitation to approach. Likely, it is quite rare for him to get signals from women, no matter who he is, what he looks like or anything else about him. He may be surrounded by women who want him but NONE of them will invite him to approach. You can swoop right in and pluck him out of the crowd easy. The downside to this is he has gone so long without this happening that he might not recognize your invitation. Just be firm and repeat it several times. Eventually, he’ll come on over. Talk lightly and steer the conversation to mutual interests and then mention you might want to do one of those together. Give him your phone number and bam; you have a date with a guy you are highly attracted to. This is easy for women to do and tough as hell for a man to do. Why? Because women get an idea in their head about the type of man they want (usually a random one at that) and are not open at all to anyone else, plus they try to keep any attraction a big secret until Mr. Right just decides to aggressively pursue them as some random encounter (yah, that works well…..not). Usually what happens is a woman gets lonely and bored and then grabs whoever just happens to be hitting on her aggressively, as a stop-gap measure. Men, on the other hand, are open to any woman of reasonable quality that seems interested in him.

What really burns my nut about the whole thing is the exception to this situation……the scumbag. Women will chase and do all sorts of freaky things for a scumbag, including competing over his sorry ass. That sort of behavior is quite natural to do for alpha males. It is decidedly unnatural and sick to do with fucked up losers.
.
Eye Contact
.

People don’t make eye contact with strangers. Especially women, who know this is an invitation of sexual interest. It’s also not an ambiguous thing. She isn’t just looking back….she’s LOCKING gazes with you. Often, she is running her eyes up and down your body before returning her gaze to you and doing all sorts of other body language signals. If you talk to her, her response isn’t all business but she’ll probably try to engage you in further small talk or even flirt with you. Without the gaze, she probably just walks up and goes, hmm, he’s cute, and then goes on her merry way. But, with the gaze, especially if you nod, smile or even wink, that changes things. It elicits behavior from her. An uninterested woman will actually be quite terse with you (lol, 99% of them), break eye contact with you, snap her at you (wench), and rapidly leave. Truthfully, though, you won’t know it until you see it. But once you see it, you’ll always be able to see it. (See Also: Finding the Small Pool of Interested Women)
.
Escalating With Women
. 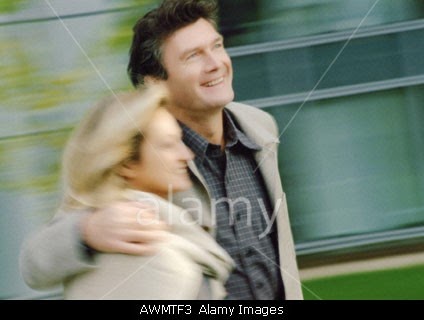 While it’s good to have a take it or leave it attitude, it’s also important to have the attitude of continuously testing the waters and trying to advance things. If you don’t, when she expects you to, she will lose interest/get pissed and wander off. The pattern goes something like this. If you look at a woman and she looks back, she is inviting you to be attracted and initiate things with her…..so smile. If she is receptive and smiles back, she is inviting you to come talk to her. If you talk to her and she seems to enjoy it, she is inviting you to get to know her, so get her phone number. If you talk to her on the phone and you “click”, she is receptive to being asked out on a date. If you are out on a date and she touches you, she is inviting you to touch her, so do so in an appropriate way. Later, try to hold hands with her. If she holds hands with you, she is inviting more intimate contact, so touch her hair. If she lets you touch her hair, it’s OK to try and kiss her. If she kisses you, then it’s OK to cuddle with her. If she cuddles with you, it’s OK to touch her more intimately. If that goes well, touch her sexually….and escalate from there. The point is to not skip any steps and always be testing out the next level of intimacy. This works best if you take your time, build anticipation and

get her expecting/desiring the level of intimacy you already have. You do 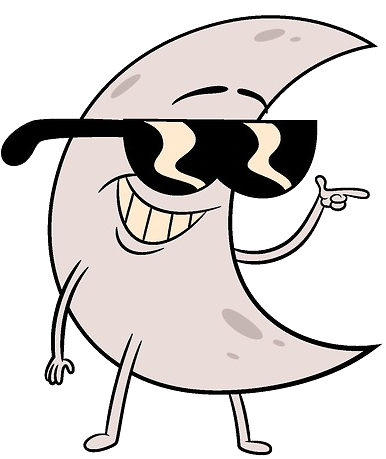 Cary (1976) discovered that the woman, through eye contact, controlled the course of interaction with a male stranger, both in the laboratory and in singles' bars. Perper (1985) gave a detailed description of courtship, stressing an escalation-response process in which women play a key role in escalation or deescalation. The steps in this process are approach, turn, first touch, and steady development of body synchronization.

Although these reports are clearly valuable, most researchers addressed courtship very generally, and some failed to recognize the importance of the female role in the courtship process .What was needed was a more complete ethogram of women's nonverbal courtship signals. To compile such a catalog of flirting behavior exhibited by women involved in initial heterosexual interaction, more than 200 adults were observed (Moore, 1985) in field settings such as singles' bars, restaurants, and parties.

Research has shown, therefore, that the cultural myth that the man is always the sexual aggressor, pressing himself on a reluctant woman, is incorrect. -- Courtship Signaling and Adolescents: "Girls Just Wanna Have Fun"? Monica M. Moore, Ph.D.Department of behavioral and Social Sciences, Webster University
.
Previous / Index / Next
.