This article will show you what are the traits that make for a feminine and sexy body language, including examples and videos.

Women also have a more pronounced lumbar body curvature to optimize weight distribution during pregnancy, and men like women who “stick their ass out” more than men do (Lewis et al., 2015).

See here how the perfect curvature would look like.

Now back to real life:

In short, curves are feminine.

After all, just think about it: would you imagine a guy standing like in the picture below?
Exactly, me neither.
Because curves are feminine, and the female model below looks ultra-feminine and smoldering hot.
By bending her neck backwards, she is also sending submissive signals for “sex readiness”, and it’s as if she were inviting men to ravish her.

Of course, you probably will not be standing like that any time soon at work or while queuing up for groceries.

But you can adopt the same principles in more “civilized” and “acceptable” format.
First of all, avoid standing straight like a cadet in front of a general, that’s male-style or gender neutral.
Instead, do the following:

You can train in front of a mirror. And you might even want to record yourself.
No need to be shy: that’s exactly what the sexiest women on the planet have done countless of times.

Curves in static body language translate into flowing movement while in motion.

Flowing movement, even more than sexy, is what I would call sensual.
Smouldering sensual, if well done.

The best way to learn flowing movement is by learning dance.
Learning to dance does more than simply teach you to move your body, but also help you to get in touch with your body and feeling comfortable in your own skin.

Here is an example of flowing movement through dancing:

She will not move in her daily life the same way she dances of course, but you can rest assured that it will rub off and that she comes across as an extremely sensual, feminine and sexy woman.

This is one of my favorites.

It’s both sexy and feminine to sway hips while walking.

Marilyn Monroe is a typical example here.
If you want to see more, check the feminine seduction in How to Seduce a Man.

Men and women diverge hugely in the way they sit.

For exapmle, men don’t sit like this, and that’s why you should (just lose the heinous shoes please!): 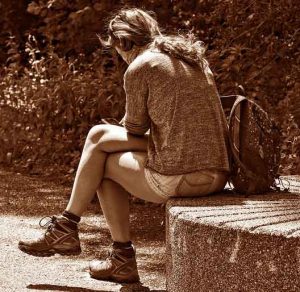 The leg twine is exquisitely feminine.

It communicates shyness and possibly discomfort and it does not ooze the sex appeal of a secure woman.

So, why are we even puttig it here?

Because it’s still very, very attractive. More in a feminine kind of “protect m” kind of way.
And trust me, men love that. It was one of the secret sauces of Monroe’s sex appeal.

So don’t try to suppress it if it’s coming natural to you: it’s endearing.

Or watch Monica Bellucci do it in video:

Perfect legs cross.
Albeit some consider Bellucci the peak of languid seduction, she plopped on that chair too abruptly though. A more flowing movement would have been even more feminine.

According to Allan Pease in The Definitive Body Language, parallel legs is the seating position that most men find the most attractive.

In the picture going from perfectly parallel to “open parallel”, which is less “extreme femininity” and far better for workplaces.

You are probably aware of the Sharon Stone famous leg cross in Basic Instinct.

The leg rub right from parallel leg position is much more sensual than the open legs shot.

In body language looking down is a sign of submission.

Two words about that as I know some female readers might bulk at the idea of “submissiveness”.
Some people lament that “in our society” submissiveness is connected to femininity. I see where they’re coming from and I get their point.
Still, those people don’t understand basic human behavior, drives and psychology.

Submissiveness in seduction is in the nature of things and it’s very localized. It doesn’t really mean “submissive for life”.
It’s as much a sign of submission as it as a sign of choice (which is empowering).
It’s a way of saying:

OK, I decided you are good enough for me. You got permission to go ahead.

Now that we clarifed that, let’s get back to some real talk.

The best version of looking down is when you follow it a look up.
So it looks like this: look at him, then look down, then look back up at him. Bonus points if you look back at him with your head tilted down.
In short: up, down, up.

This move is very invigorating for men and makes them feel awesome. It’s possibly the best move you can make to embolden a man to come to you.

I still remember the first time I received a perfect “up-down-up” gaze.
It was years ago from a beautiful Kazakh brunette in a club in Prague.
Back then I wasn’t as book-smart when it comes to body language, but I immediately had a visceral pull towards her.

Angelina Jolie got the “up-down-up” to a science.

She is so smooth in doing it that most people wouldn’t even consciously notice it.
But it’s one of the main reasons why men are drawn to her like moths to flame.

The first one is subtle and can be used also with men you “only” want to be attracted to you. The second is more obvious.

Jack Schaefer in The Like Switch says that the eyebrow flash is a sign of friendship and liking.

Indeed it is, and especially so when used by men.
But with a pesky, slight allusive smile it’s sexy. And it’s sexy in a very jaunty, cheeky way.

Even better and more allusive is if you can pull it off with a single eyebrow up (in which case, drop me a note in the contact section :):

The above flight attendant example is a 10/10 also because of the perfect voice tonality.

Oh well, you should know this one.

It’s a bit like walking and talking: everyone does it and nobody thinks much of it.
Instead, it’s exactly these basic moves that make the difference between sexy women and non sexy women.
This is an example of hair flick.

We have seen Angelina Jolie twice already.
Makes sense, right? She is (was) one of the most beautiful women in Hollywood.

If you have ever noticed Angelina Jolie smile, it not a normal smile. It is broad. And wide.
She doesn’t smile like 99.8% of the population smiles. She opens her mouth fully.

Jolie’s smile makes her look slightly out of control and a bit mad (or “dumb”, someone said). But it’s sexy. It’s sexy in a primal, carnal way.

Did she carefully pick and trine that “carnal smile” to become who she is? That, I don’t know.
But I personally think so.

Winks are not the sexiest expressions of feminine body language. They’re more boysh / friendly and a bit too obvious.

However, anything can be turned into sexy. Best of all, if you combine it with a sensually opening mouth, which is an obvious hint to the sexual.

When you need to go nuclear, you drop the “y” from “sexy” and you go “sex body language.

Signs of open sexuality include:

They all have a place and they can all be extremely sexy… Under certain circumstances.
When you’re already engrossed in a sexual atmosphere for example, while having sex, when you want to send a crystal clear message, or maybe with a guy who just doesn’t get it.

This is the sub-communication of open sexuality body language:

Sexually explicit body language outside sexually-charged interactions can easily become tacky though.
And you should be aware that this is something that transexual men often use.
I’d be wary of a woman who uses “sex body language” outside of very specific situations, and this is something I recommend only if you are a “pro”.

Attractive body language is all about alluding to sex.

But what about the actual act of sex?

Well, this is a very interesting topic, but let’s keep this article on more public expressions of attractive body language.
And maybe I’ll do one post just for “during sex” body language later on.

For now though, enjoying sex, reaching an orgasm and abandoning yourself to it is a very powerful way to be sexually feminine.
Indeed, we could probably say that an orgasmic face is, well, the peak of sexy body language.

Also on the topic:

Finally, here are a few more that most people are naturally aware of:

Example of going from most close and unfriendly (left) to most open (and submissive):

You can see more picture and examples in:

There are four types of attractive female body language:

Attractive female body language is all about hinting to sex or sexuality.

However, when that sexual layer goes from hint to “in your face”, the woman can be perceived as lower quality as compared to more subtle women.

Sexual body language which is overly obvious will also eclipse everything else.
Your words, your job, your thoughts… They will all disappear when the sexual becomes too obvious.

What to do then?
You need a touch of sexual and you need to reference sexuality. But don’t leave it by itself. Temper it with mixed signals or with other traits such as submissiveness.

Submissive signals communicate sexual accessibility in a way that is coy and mixes the “protect me” with the “fu*k me”.

Aggressive is openly sexual while being forward and devoid of teasing and submission.

It turns the tables on him and she becomes the aggressor.

When it’s well done, it’s hot as hell and necessarily non-feminine. It can certainly have its place in steamy encounters, but like the purely sexual it’s best not to be used in public unless you’re already a pro.

A good mix of aggressive sexual abandon mixed with push-pull during the first escalation to sex (read: how to postpone sex).

Teasing is possibly my favorite.
It’s very powerful and it makes men chase like wild beasts as it sub-communicates the following:

I might be up for it. But will you be man enough to catch me (/fuck me)?

The winks we have seen earlier are examples of good teasing.

The Sexiness is in The Mix

The above categories don’t work in isolation and there is often a mix of the different styles.

The most seductive women manage indeed to send mixed signals from all different categories, and they can move from one role to the next depending on the occasion.

As in the following:

Ayda Yespica whom we reviewed in How to Seduce a Man mixes sex and teasing to perfection.

This is possibly the most powerful of them all.

Marylin Monroe is the best example as she was high in purely sexual (orgasmic faces) and sky-high in submissiveness.

The submissive and protection seeking body language would take the edge off of her purely sexual body language so she wouldn’t look “whorish”.

Explicit and submissive is indeed the only style that can be extremely sexually forward without being labeled like a whore (this is important because of men’s Madonna-whore complex). Monroe was indeed considered a high value woman.

Sexy body language for women must always have:

In this article we reviewed a few practical examples of some attractive body language poses for women.