A Moment Of Appreciation For The Good Wives 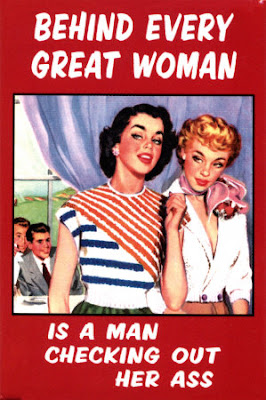 Too often in the Manosphere we speak of feminine excesses that irk us and the generally poor state of male-female relations in Western Culture, and we don't stop to remember that femininity, like masculinity, is not monolithic. Even though individual women might drive us crazy and womanhood in general might inspire strong feelings in us, the fact is that for every strident, intransigent feminist out there there is also a woman who is struggling with the same issues we are, and doing it from their side without resorting to wild idealism and harsh criticism.

I find it fascinating -- and encouraging -- that so many prominent voices in the Manosphere are happily married men. Athol Kay, Leonidas, myself and other dudes hashing out the Tao Of The Red Pill are in successful and presumably healthy marriages to strong, capable women. One thing you can say about the men of the Manosphere, they don't go for the vapid trophy wife. We like our women capable. Good moms. Good wives.

This might seem a cognitive disconnect for those who do not understand what we're trying to do here. After all, the feminist apologists say, isn't your collective purpose to subjugate and oppress your wimminfolk? Why no, no it is not. Our purpose is to find a new definition of masculinity that works in the realities of a 21st century, post-industrial society with the end towards a more fulfilling and meaningful life on our own terms.

It also might seem strange from those who view the Manosphere as a natural extension of the alt-right philosophical movement that sees the brightest future in stuffing the genie back in the bottle and living according to 1950s industrial gender roles, with women out of the workforce and back in the home. After all, isn't our purpose restoring menfolk to their rightful place as masters of home and hearth and all they survey, untainted by feminine considerations? Why no, no it is not. Our purpose is to find a new definition of masculinity that works in the realities of a 21st century, post-industrial society with the end towards a more fulfilling and meaningful life on our own terms.

Women aren't going to leave the workforce, nor should they. Women aren't going to go back to the old culture of demure sexuality and highly-protected virginity, nor should they. Feminism was not an evil plot to overthrow Western Civilization, it was a natural and predictable outgrowth of a change in economic and social factors. At its best it provided a structure to enact some much-needed reforms to our society. At its worst . . . well, I don't have to tell you.

But it's telling that my wife, a leader in her field and a brilliant woman all around, eschews the label of "feminist" and holds feminism at arm's length, even as she crashing up the corporate ladder like a bulldozer in a rainforest. She's suspicious of capital-F Feminism, thanks to some unpleasant college experiences, and none of her wildly feminist friends are in happy places. That doesn't mean she isn't strong, proud, and highly capable, or that she defers to me unconditionally.

We have both a strategic partnership and a passionate love, and the thought of trading that pleasant and pragmatic bond for an overly-nostalgic version of an ideal 1950s Golden Age that never truly existed makes me shudder. I like my smart, funny, capable wife. I love the fact that she wouldn't be in her present position in her career without my support. And I love the fact that when I do lead, she does follow in the best Captain/First Officer tradition. I don't see my actions as unmanly when she takes the lead in an area outside of my expertise -- for example, she's the Chief Medical Officers, since she has medical training and clinical experience beyond my First Aid. When there's a medical issue, she takes command and I love being able to cede that responsibility to her and act as her willing assistant.

You have to admit, it can't be easy to be married to any of us Red Pill guys. We tend to attract intelligent, strong women, and the fact is that any guy with an ego strong enough to blog about masculinity and such is going to end up being a dick sometimes just by his nature. They put up with it, but it isn't easy.

It is usually, however, worth their while. My wife regularly and without solicitation or prompting tells everyone she knows just how great I am, and I return the favor. She loves the Alpha/Beta balance I've struck and sees value in my quest for a new masculinity. In a sea of relationship dysfunction we are happily married, raising kids, and enjoying life far more than our peers, and the only way that happens is when we both understand our roles and execute them accordingly.We're kind of a nerdy power couple, and we make it work. Mostly. And when we have issues . . . we deal with them, without drama.

I don't know if we're a model for others or a mere aberration, but we're happy and part of that stems from my reassessment of masculinity, and part of that involves appreciating femininity for what it is, the good, the bad, and the ugly. I think that understanding and recognizing the realities of the social situation is key to pragmatically moving forward towards a new masculine paradigm instead of dwelling on what we think we've lost and whining that we're not in charge all the time anymore. In a recent comment on another blog I took some of the commenters to task for their bitterly negative view of femininity, because I see femininity as a good thing. Heck, I even see feminism as a good thing, once upon a time.

But if we're going to redefine and revalorize masculinity, we won't be able to do it without understanding and appreciating femininity, first. And that means knowing and loving the powerful women who share our lives.

So thanks to all the good wives out there. Keep it up, ladies, we love you for it. And tell your friends. No, really.
Previous Next