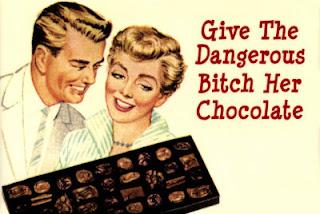 Okay, I know Athol and I and a whole bunch of other Manosphere guys are hardcore geeks and nerds (there is a difference, but only a geek would know it and only a nerd would argue about it).  That's off-putting to some folks who don't "get" sci-fi and think it's all a bunch of ray guns and rocket ships.  The fact is, the reason a lot of us geek out about sci-fi and comics and such is that they present more elegant and useful metaphors for the realities of our post-industrial existence.  "Using the Force", for instance, when you are closing your eyes driving through traffic on the interstate, or "entering the Neutral Zone" when undertaking activity of dubious legality.  The fact is, we use sci-fi metaphors because they are apt and elegant and they are a common point of reference for many of us who didn't do a lot of dating in High School.

That being said as preface, we come to the topic of today's post, the proper way to give your wife chocolate.

Mrs. Ironwood and I have been eagerly enjoying The Big Bang Theory, not only for it's witty nerdicissms but also for it's portrayal of a gang of misfit Betas, Sigmas, Deltas and Omegas attempt to overcome their terminal geekatude and find babes.  When one actually does, his roommate Sheldon, an anal-retentive OCD genius theoretical physicist, has a hard time dealing with her feminine idiosyncracies.  Instead of pitching a hissy fit, he handles the situation with masculine cunning.  Observe:

(Crap, they disabled embedding, the bastards.)

I'll wait a moment while you first go watch this clip . . .

When Mrs. Ironwood and I first watched this, we laughed so hard we almost peed.

And after that it became an inside joke.  I started carrying around a small bag of candy (Hershey's drops, but any kind of small, easily portable chocolate candy will do) and whenever she did something I approved of, say, initiate sex, talk dirty, or  verbally offer me respect for what I do, or some such, I'd whip out the bag and say "Chocolate?" and she'd laugh.  I'd laugh.  Funny.

But I kept doing it.  After a while, it stopped being funny in one way, and started being funny in another as she acknowledged my conscious attempts to take control of the relationship and modify her behavior.  Whenever I suddenly offered her a chocolate, it was a tangible and concrete sign of my approval, and a tacit rejection of the behavior she avoided.  In other words, it made her unconscious behaviors I disliked conscious, calling her out and holding her accountable, while rewarding her for her efforts to counter them -- even if they were accidental.  I tried to never do it ironically, always supportively.  And after a while, I didn't even need the chocolate.  I could just pantomime handing her one and asking, and she'd get the point.

Once again, little subtle, subtextual rituals can communicate volumes in a marriage.  I'm not trying to demean my wife, belittle her or insult her intelligence.  But I am making a point of letting her know that I am observing her behavior and such little things do not escape my notice or my memory (as she once thought they did).  And lastly I am making the point that I would much rather lovingly offer her chocolate for good behavior than, say, get into an argument over negative behavior.

Yeah, I can use it to be an asshole sometimes.  But she forgives me.  Hey, I give her chocolate. What's she going to say?
Previous Next