Ian Ironwood
April 14, 2014
The Red Pill Room
Ladies, if you're wondering why your online dating ads aren't getting any traction, perhaps it's because you are a) unrealistic and b) unwilling to "settle" for less than you are "worth".


When the Wall finally does smack you in the ass in a way you cannot ignore, Nature will decide which of you are pragmatic enough to re-frame your idea of Happily Ever After (HEA).  Case in point is this gem I found locally.  This is adept Girl Game, Single Girl Edition.  Her ad is short, sweet, to-the-point, and is awash with refreshing candor: 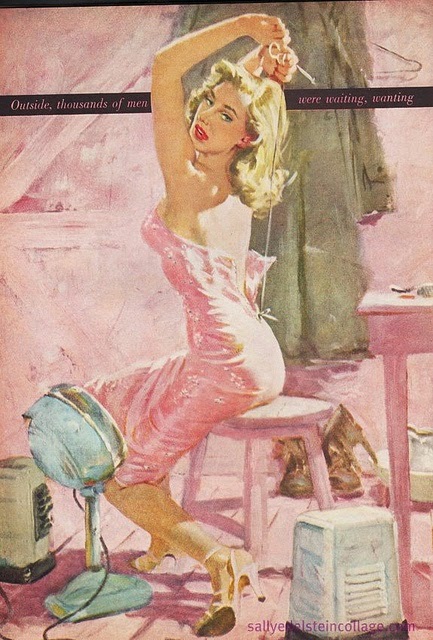 age : 30I have many fancy degrees in the artistic / liberal arts field. In other words, I am a low paid individual with not a very bright future on my own.

I am seeking a boyfriend who can provide stability. I can plan and carry out dinner parties for your friends and family, escort you to events, provide sex, cooking and other domestic chores. And maybe even needlepoint a pillow for your mom.

I am white, 5'4, in shape. Only interested in attractive white men under 40 who are in shape and disease-free.


Why is this ad so effective?  First, she introduces the fact that she has a) a liberal arts education and b) a low paying job.  Then she dismisses all of her career accomplishments, an unusual and refreshing tactic, to focus on her vulnerability and growing desperation.  She adds "not a very bright future", the implication being she needs help. Damsel in distress, sure, but she's doing something about it.

But instead of wildly demanding a list of what she expects in a man and a relationship, she humbly and forthrightly lists the feminine comforts and advantages she would bring to the table.  Not her degree, not her job title, not her romantic nature and predilection for long walks on the beach, she keeps it short, sweet, and simple.

She's not even looking for a husband or "that certain special someone" - she understands the commitment issues most men have, and doesn't push for anything beyond "boyfriend".  That's not scary to an average man, but it's also not going to cause a serious minded individual from excluding her.  She's clearly looking for a long term relationship, but she's not demanding one.  All she wants is stability.

Then she lays out what she's willing to do, what she brings to the table:

Party planning and entertainment (social augmentation, important for nerds)
Sex (she lays it out there right up front, no equivocation about "if things feel right")
Cooking (!)
Other Domestic Chores

She could have said a lot of other things, elaborated on what she wanted or what else she could bring, but she clearly understands what her future holds without the rose-covered glasses feminism hands out.  She's ready to plant a flag, and while she's clearly looking for a good Beta, she also presents herself as a woman who might be worthy of the reward of stability for her candor.

But everyone should take a lesson from this: femininity attracts masculinity.  Period.  I don't care if this woman is overweight and $50k in debt, this ad alone demonstrates that she's got the kind of pragmatic character and social adpetness that could propel a good nerd far.  While there are no guarantees, and I haven't seen the fine print, she's at least worthy of consideration if you're the kind of man looking to settle down.

Interested parties contact me, I'll put you in touch. She wants a face pic and a little about yourself.  She lives in the central North Carolina region.  If she's a real local (I don't know yet) she could be a real Southern Belle prize for a lucky Red Pill dude.  I'll keep you posted.