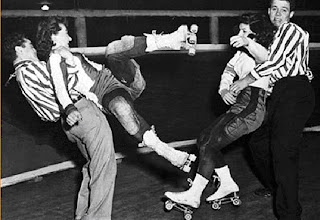 Preselection, as most Red Pill dudes and Married Game aficionados know, is the tendency to find someone more attractive based on the fact that a third party finds them desirable.

I don't wear a wedding ring, for instance, because it makes me more attractive to single women because they figure SOMEONE thought I was worth a damn.  Similarly, when a man or woman wants to elicit a strong and passionate response in their partner, a little flirting with a member of the opposite sex in front of their SO -- or even overhearing a member of the opposite sex say flattering things about your spouse -- is often sufficient to inspire a passionate reaction.  Preselection is a power-up for your sex rank.

True Story: At a sci-fi event where I was promoting a book, Mrs. Ironwood chanced to be in the bathroom at the same time as two of my younger, prettier fans (I have old and ugly fans, too, BTW).  They had just met me, and I had been my usual charming self and flirted to the very boundaries of good taste -- Mrs. I wasn't around, no harm done.  But when she overheard them talking about hot hot I was (!) and wondering to each other if I was single, I suddenly had my usually only casually-interested wife glued to my side for the rest of the evening.  And minstrels will one day write epics about the humpage that evening.

But I digress.  My plan was to incite a Preselection buff through the simple and safe expedient of a date with my 10 year old daughter.  She's had a recent birthday, and I have been promising her a Daddy-Daughter date for a while.  The day before my date I had found out that the season opener for our local Roller Derby league was that afternoon, and I had grabbed tickets.  I surprised her with them that morning, and told her after she got back from Girl Scouts we would be on our way.

Mrs. Ironwood, of course, always loves to see me spend time with the kids (SR+1).  But she had spent all morning with a hundred screaming Girl Scouts, and had to take the boys to Cub Scouts now.

"Aren't you going to finish--" she began, as we waited in the driveway for the boys to emerge in uniform -- never a short process.

"Done," I answered simply, referring to any number of chores on my weekly list.

"Do you think it would fun for all of us to go?" she asked, expectantly.

Nostrils flare.  "I spend all day with Girl Scouts and SHE gets a date?" she asks with a snort.  "When do I get a date?"

I shrugged nonchalantly.  "I'll see what I can do.  Consult your schedule.  Maybe if you play your cards right.  Besides, you and the boys have an activity.  This is our special time."

"Well, you and l'il Elektra have a blast!" she said, sarcastically, sticking her tongue out at my daughter.  She gave me a few more nostril flares for good measure and opened the hatch for the boys.  She looked me up and down -- I was looking GOOD.  Black jeans, black sweater, black wool coat, black fedora, long black scarf.  Just had my hair cut and my beard trimmed.  Shoes were shined.  I smelled good.  Real good.  She noticed.

"It's just not fair!" she grumbled one last time before giving me a peck, her daughter a jealous glance, and pulled away.


Daughter and I had a blast by ourselves -- I let her sit in the front seat in flagrant violation of matronly directive, I bought her a MASSIVE bag of blue cotton candy, I asked her about school and boys and Scouts and other Daddy-Daughter bonding stuff.  She was eating up the attention.  And yes, she had TOTALLY caught how jealous Mommy was, and that was the coolest thing in the world.

Ran light Game on her through the ticketing and concession process, but she was on perfect behavior as we learned the intricacies of racing around a cement floor on wheels as an acceptable outlet for feminine aggression.  Daughter was enchanted.  We went through the program and studied the rules and the players.  By the end of the second bout, we kinda knew what we were talking about.

Meanwhile, I had to fend off the advances of several women.

I'm a decent looking guy in my 40s in nice clothes, no wedding ring, taking my daughter to a fun girl outing.  I heard "Oh, is it your weekend?" at least five times.  Older women, younger women, me sitting there with my arm around my little girl, looking all paternal, I felt like prime steak at a Weight Watchers meeting.

Interesting side note: Gentlemen, for a target-rich environment of women of all sorts -- but with PLENTY of the young-and-cute variety -- I cannot recommend Roller Derby bouts strongly enough.  Once you peel back the thick layer of lesbians, what remains is no less than fertile territory.  They serve beer, there are literally thousands of opportunities for approach, its a low-shield environment, and after a couple of active bouts most of these women had their blood up and would have humped any convenient leg.  Just thought I'd put that out there.  That is all.

Bought Daughter a highly-coveted T-shirt, got some free promotional stickers, took some pictures, saw some gruesome pictures of the various injuries sustained just last season (!), talked Daughter out of an expensive pair of skates by pointing out her feet were still growing.

But she was enchanted.  Girls hitting other girls.  Girls on skates hitting other girls . . . to the roar of the crowd.  Now, I call my daughter (half-mockingly) "Princess" sometimes, but the fact is that she's more the Xena type, despite her pretty looks.  My girl can take a hit.  She's got feet that would make a ballerina faint -- the Ironwood tootsies have been huge for generations.  But she'd make an outstanding Roller Derby girl . . . in eight years.  When she has her own insurance.

But she did pick out her Roller Derby stage name: Kitty Katfight.  That's hers, now.  She called dibs.  Don't cross her, either.

We had a great time coming back, covered in cotton candy, the sun fading towards the horizon, Mommy and the boys already home from their field trip.  My rank towards Daughter went up significantly, and then even more when I revealed the plan of The Big Date.  I gave her the details.  She thought they were impressive and said so.  She offered a few suggestions.  I took one, dismissed the rest, thanked her for her help.  I got a "Best Daddy EVER!" for my troubles.

On the way home, I texted my wife:

YOU HAVE 45 MINUTES TO SHOWER AND MAKE UP YOUR FACE.

Next time: Phase 2 Extraction
Previous Next