My brother Andy clued me in to one of the most innovative and thoughtful efforts at masculine bonding I think I’ve ever seen.  This report on CBS Sunday Morning on a group of guys who have maintained a close friendship since high school . . . through an annual game of Tag.

Essentially, these ten friends from a Catholic high school used to play Tag . . . and they never stopped.
The rules are simple: The game lasts for the entire month of February.  If one of the members asks if you are “it”, you must answer honestly and promptly.  And you can’t tag-back. 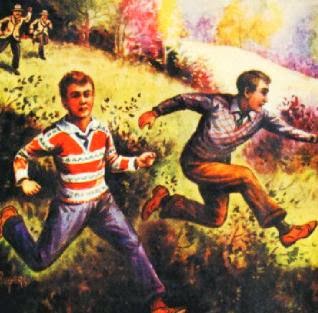 It sounds juvenile, and it is.  It's supposed to be.

Tag is one of two human universal games, that is, every human culture plays tag (the other one is Hide N Seek).  It’s likely left over from our Paleolithic forebears, a hunting exercise that helps children develop the skills to both stalk and evade, both important things for a young human in the wild.  The fact that these men haven’t given it up for all of these years has transformed the simple game into a complex, sophisticated exercise in male bonding and friendly competition.

That's a key point to a man trying to break his Beta.  If he's suffered in a relationship with a domineering woman, or even just one that keeps him too busy to cultivate good male friends, then he misses the kind of refreshing masculine competition and camaraderie implicit in play.  A friend of mine has a pick-up basket ball game he's gone to pretty much every Wednesday for the last ten years.  It's where he forgets about his stress and renews himself through sweat, competition, and tactical thinking.  When he gets home he's sweaty and nasty and his wife can't keep her hands off of him.

Many of us have launched the Paleo diet to one extent or another, but while we’re usually pretty good about the bacon-and-eggs portion of the diet, when it comes to the recommended one daily hour of play, we either burn that off in the gym or postpone it for a more convenient time.  Yet the emphasis on play in the Paleo diet isn’t merely to encourage you to exercise the way that Alley Oop did . . . it’s to remind you of both your need for child-like indulgence in pure physical entertainment and your need to hone the vestigial warrior/hunter skills we gave up with agriculture.

Tag fits the bill for this in a lot of ways.  The men of the Tag Brothers are clearly dear friends, even if they are separated by continents, family, and employment.  That does not stop them from being hyper-competitive about the game.  No one, of course, wants to be “it” on the last day of February, and therefore bear the shameful title for the other 11 months.   So they scheme, plot, stalk, and spring.  They dress in drag.  They dress as homeless bums.  They dress as old ladies (for the coveted  “hag tag”).

There is no shame or regret or dignity involved – these men are playing to win, and they’re playing hard.  Juvenile?  Perhaps . . . but who really gives a shit?  In our electronics-focused world the idea that you can play a sophisticated game without the use of anything but three rules and your ingenuity is a huge challenge to your masculine abilities.  And it doesn’t give anyone hard feelings, one of the perpetual issues with most competitive endeavors.

Tag is a beautiful game.  In its purest form on the playground, we see children playing it as a means to improve their speed, stamina, hand-eye-coordination, alacrity, endurance, and all of those other skills that were so important to the pre-muffin world.    Of course over time we lose both the willingness to run around like a fool and the desire to submit to such base entertainments when civilization has provided so many more sophisticated outlets.

But starting a game of tag among a dozen or so of your friends in your town, or from your old unit, or from that really cool job you had where everyone got along great before everyone got laid off could be an exciting and important way to re-energize a flagging sense of masculinity.  It has the manifold masculine virtues of being strategic, competitive, and – clearly – a huge amount of pure good-natured boyish fun.  It emphasizes stealth, surprise, intelligence gathering, and quick-thinking.

The specifics and variations which you could add to this are infinite.   Perhaps “it” for the year has to buy everyone dinner.  Perhaps they have to keep charge of some particular trophy if they are unlucky enough to be the last one tagged in the month.  But the game suggests an opportunity for the formation and maintenance of some close and strong masculine relationships.

It beats playing with yourself.
Previous Next