Ian Ironwood
July 18, 2014
The Red Pill Room
I get a lot of mail from men who are desperately looking for a way to Alpha-up, break their beta, and submerge themselves in the sweet balm of masculine culture . . . but have no freakin' way how to get there.

That's understandable.  After forty-plus years of denigrating everything of masculine value, the institutions that once provided the stable and reasonable introductions into the world of masculinity have been tarnished, bruised, and battered in our society.  Even seeking out a place to cultivate your masculinity will make you the object of derision and scorn among the women and gammas in your life.  Tell a feminist you want to go someplace and learn how to be more manly, and you might as well tell her you're signing up for an "Intro To Patriarchal Oppression And Rape Culture" class.  Our culture has derided the traditional masculine to the point where manhood itself has become a tired old joke in our popular culture.  I don't need to tell you this stuff.  You see it all the time.

I know of such a society.

When I talk to men about cultivating their masculinity they despair of not having a good group of male friends.  Of not having the opportunities to explore their character through challenge and trial.  I see men who desperately want the discipline and the camaraderie of male society, who crave the opportunity to contribute their own talents and resources and be recognized for those contributions.  The want a place where they can go and be men without recourse to a locker room or basic infantry training. A place who will accept them for who they are, and help them grow into who they want to be.

I know of such a place.

The Boy Scouts of America. 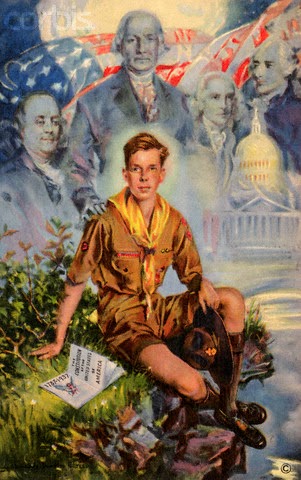 Scouting has taken a lot of heat from liberal and progressive factions over its stance on homosexuality.  While it is now permissible for Scouts to be gay, there is still a ban on openly gay leaders.  There are many complicated reasons for this - gay Scout leaders do now exist and have served with distinction and honor for decades in Scouts - but because of the number of religious conservatives and the perceived liability, as well as some cultural issues, openly gay Scout leaders are forbidden by the BSA.  And that little point has been the wedge that progressive feminist organizations have used against the Scouts for years.

But that's not really what bugs them.  What bugs them is that Scouting has been, and is still dominated by men and masculine values.  When men congregate to discuss anything without the benefit of female supervision, the Matrix goes nuts.  The feminist Matrix in particular recoils in open horror, assured that the Patriarchy is conspiring to oppress the wimmins the moment their backs are turned.  When men gather together to discuss how to become better men - which is the fundamental and unchanging focus of the international Scouting movement - feminists freak the fuck out.

The matter of homosexual leadership is just the excuse.  The moment that the ban on gay leaders is lifted, there will be yet-another issue the feminists will level at the Scouts when their current one is no longer valid.  Truthfully, that day cannot come too soon - not only is this a minor issue for most groups, but it would be nice if gay Scout leaders didn't have to hide.  For the most part they have no "gay agenda" beyond raising their sons to be good men.  Using homosexuality as a wedge to divide men against each other does a disservice to us all.

But if you're looking for a place to freebase masculinity, you can't ask for better without joining the French Foreign Legion. Just look at the Scout Law to see the bedrock masculine values that Scouting teaches: 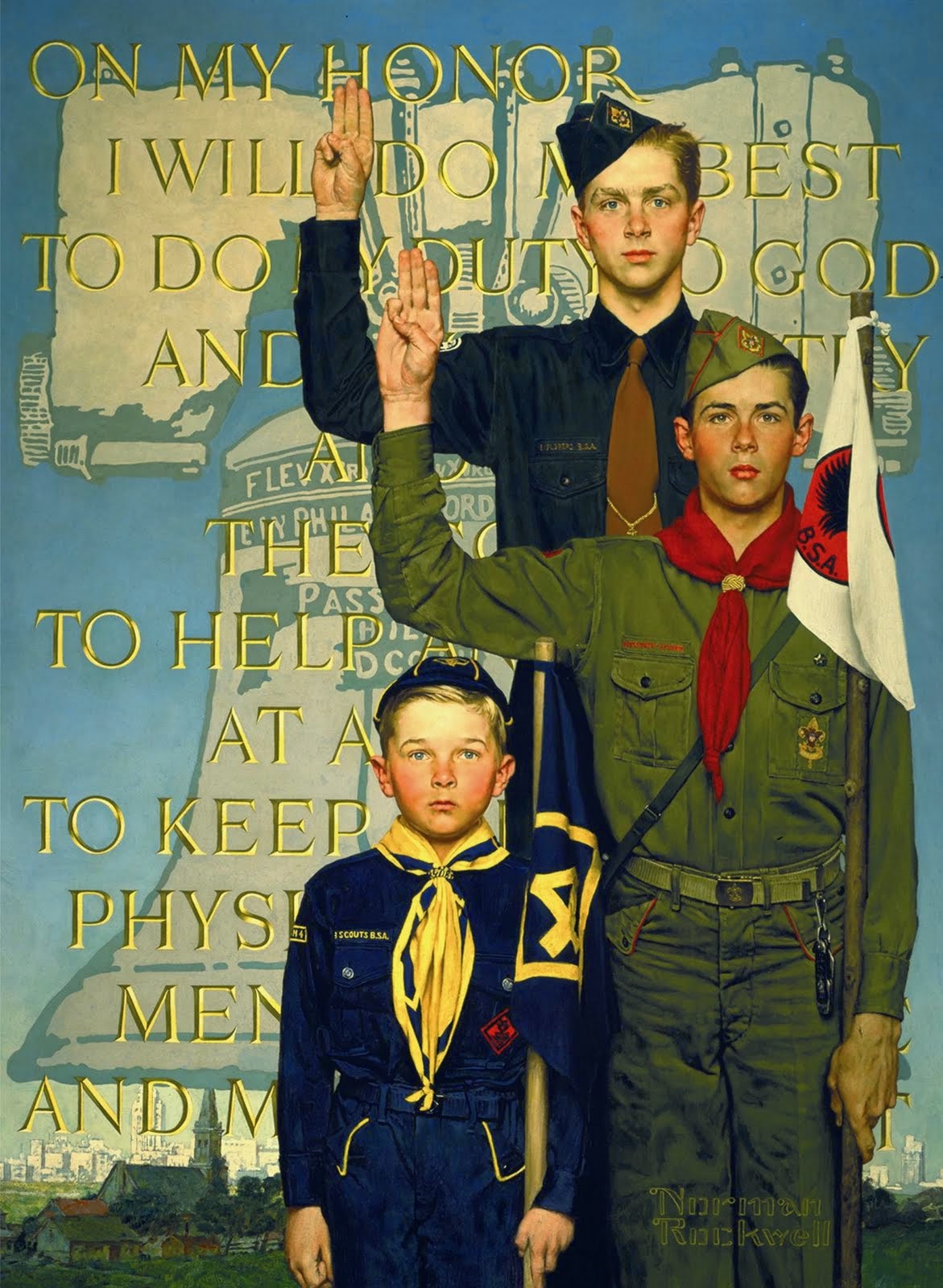 
There is not a single thing there that conflicts with the Red Pill praxeology.  Indeed, it is a celebration of masculine values unsullied by feminism.

Boy Scouting began a hundred years ago on Brownsea Island, in southern England, the product of Lord Baden-Powell's vision.  He was a soldier in the later British Empire who served in Africa, India, and other places in the Empire.  Most notably, he lead a mostly-civilian defense of a town in South Africa against Boer insurgents.  It was during this siege that he employed 11-13 year old boys as "cadets" to handle non-violent military responsibilities that would otherwise use a soldier who could be on the lines.  After the siege he expanded his exploration of youthful participation, writing a few field manuals on military scouting and reconnaissance.  Upon retirement, he discovered his military books were enjoying huge popularity in British schools when it came to being trained in observation and deductive reasoning. 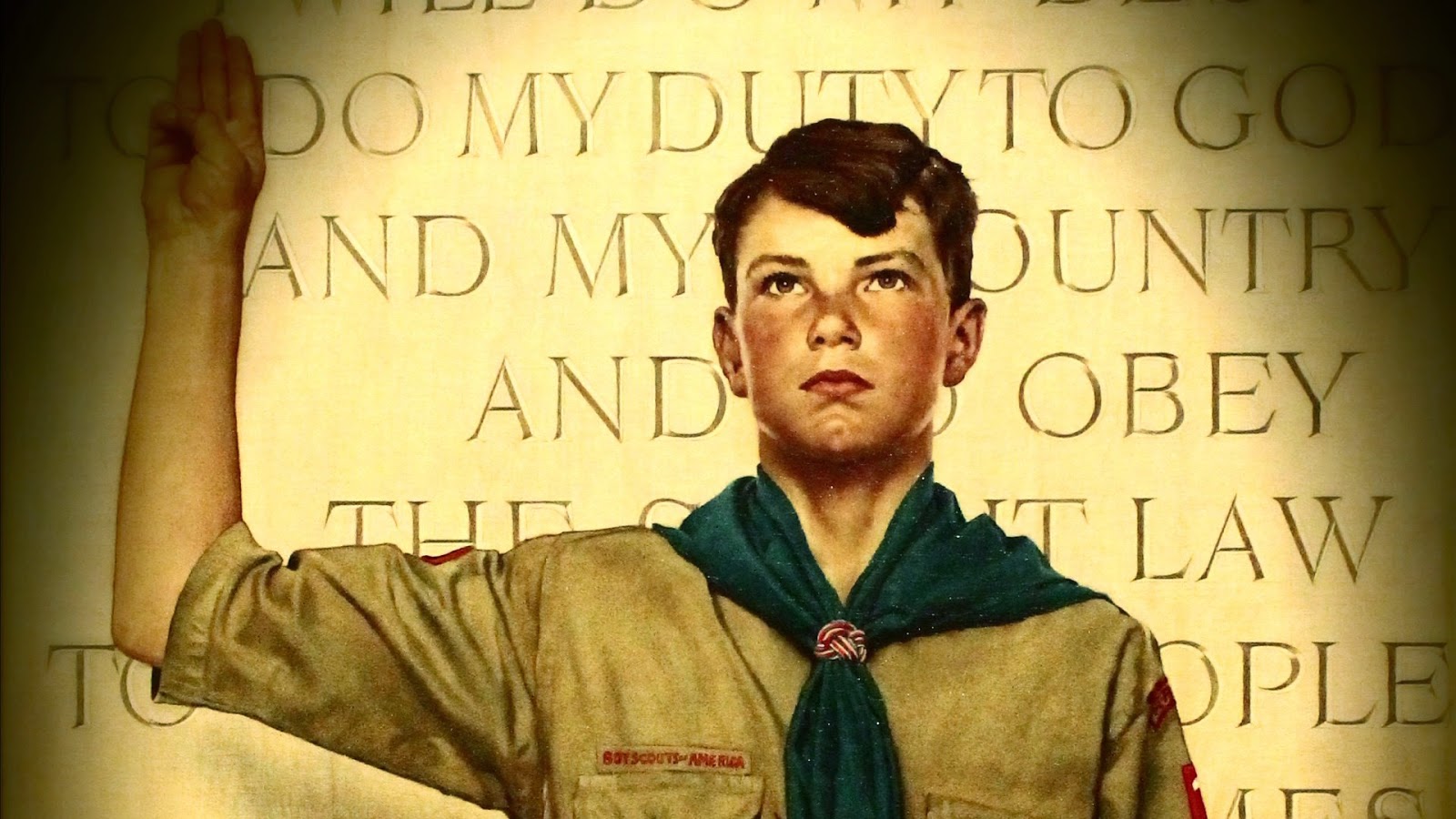 Seeing the inadequacy of the quality of manpower the British Empire was dealing with (a by-product of the industrialization of England) Baden-Powell decided to do something about it.  He re-wrote his books on scouting as Scouting For Boys, and laid the foundations of the Scouting movement with a camp-out at a small off-shore island in the English Channel.  He took twenty boys from various socio-economic backgrounds, took them camping, taught them knots and other useful stuff, and generally began a tradition of male self-improvement that has influenced millions of men today.

Scouting is perhaps the best, easiest, and most cost-effective route to self-improvement in which a man or boy can enlist.  It distills the patriotism and discipline from the military - long the essence of male-oriented organizational culture - and removes the violent component, leaving just the plethora of skills and the path to achievement.  Scouting organization is replete with ranks and levels of achievement.  No one ever got an Eagle for "participation". 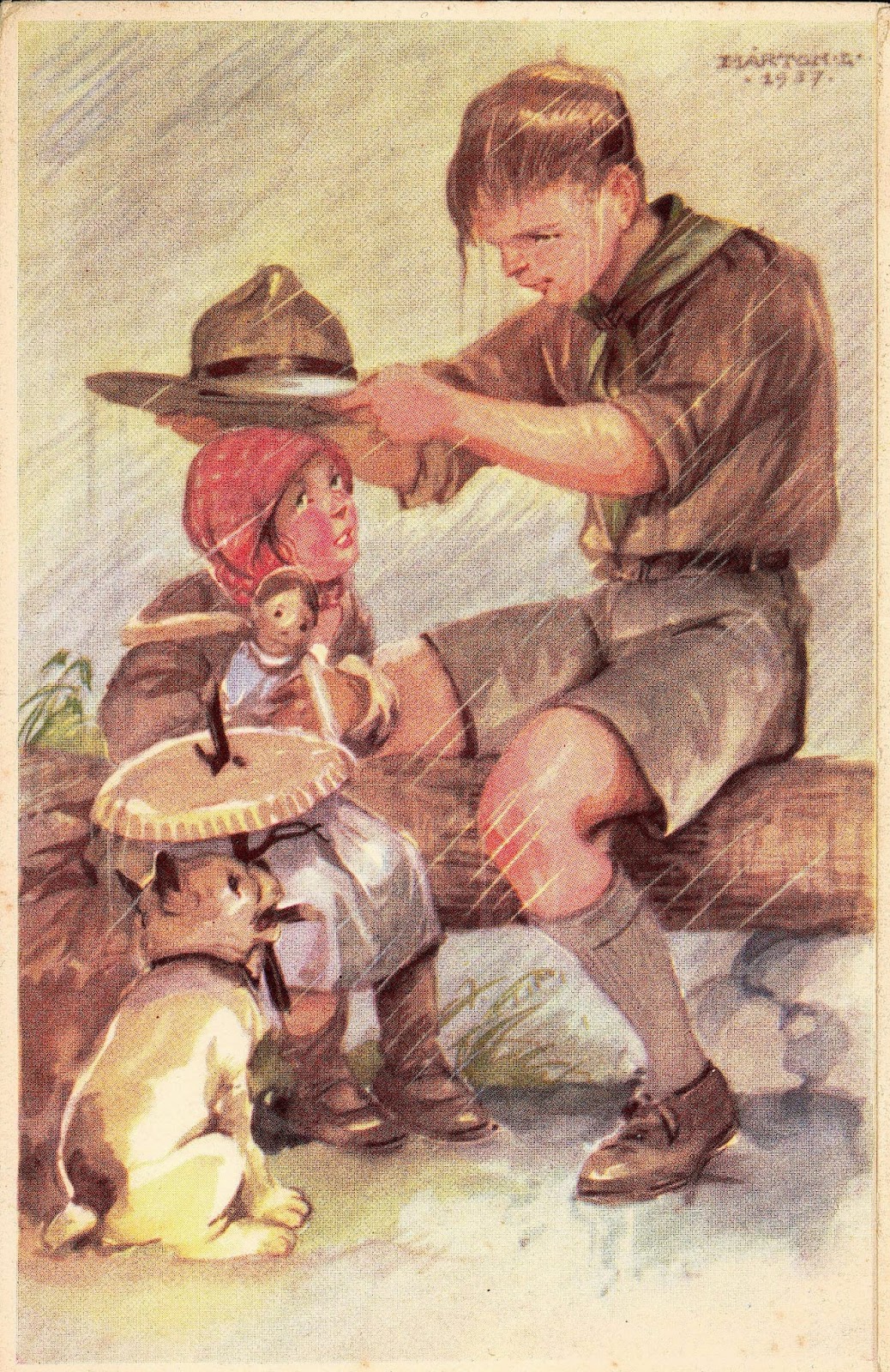 That's one of the feminists' issues with Boy Scouts: they encourage actual achievement, not artificial self-esteem.  If you want the 50-mile hike badge, you have to hike 50 miles.  You don't get a patch to celebrate your ability to show up and eat pizza.  The Scouting program is designed to challenge and encourage a boy to be the best man he can be, not feel good about himself for no particular reason.  Scouting carries the essence of masculine values in its basic tenants, and reinforces them through masculine-oriented rituals.  There is no equality, no equity, no consensus.  There is a Program, and there is accountability.

While you may have missed Scouting in your own youth (if you're over 18, there's no way you can make Eagle), the fact is that the culture and the environment of Scouting is perhaps even more beneficial to grown men.  Scouting is always looking for good, responsible, committed leaders, and there's no rule that says you have to have a son to participate.  Indeed, in our troop we go out of our way to include men in our community who might not have a child themselves, but still have something to contribute.  Anyone who can pass a criminal background screen and takes the Child Protection course is welcome.

You might be asking yourself, "how can I help a bunch of 12 year-olds become men when I'm not sure how to do it myself?"  Scouting offers plenty of training (the Wood Badge course is legendary for corporate leadership training) and the fact is that once you have to start breaking down basic masculine skills to a youth, you learn them better yourself.  By being responsible for someone else's struggle with achievement and education you gain significant confidence and esteem yourself.  Really. 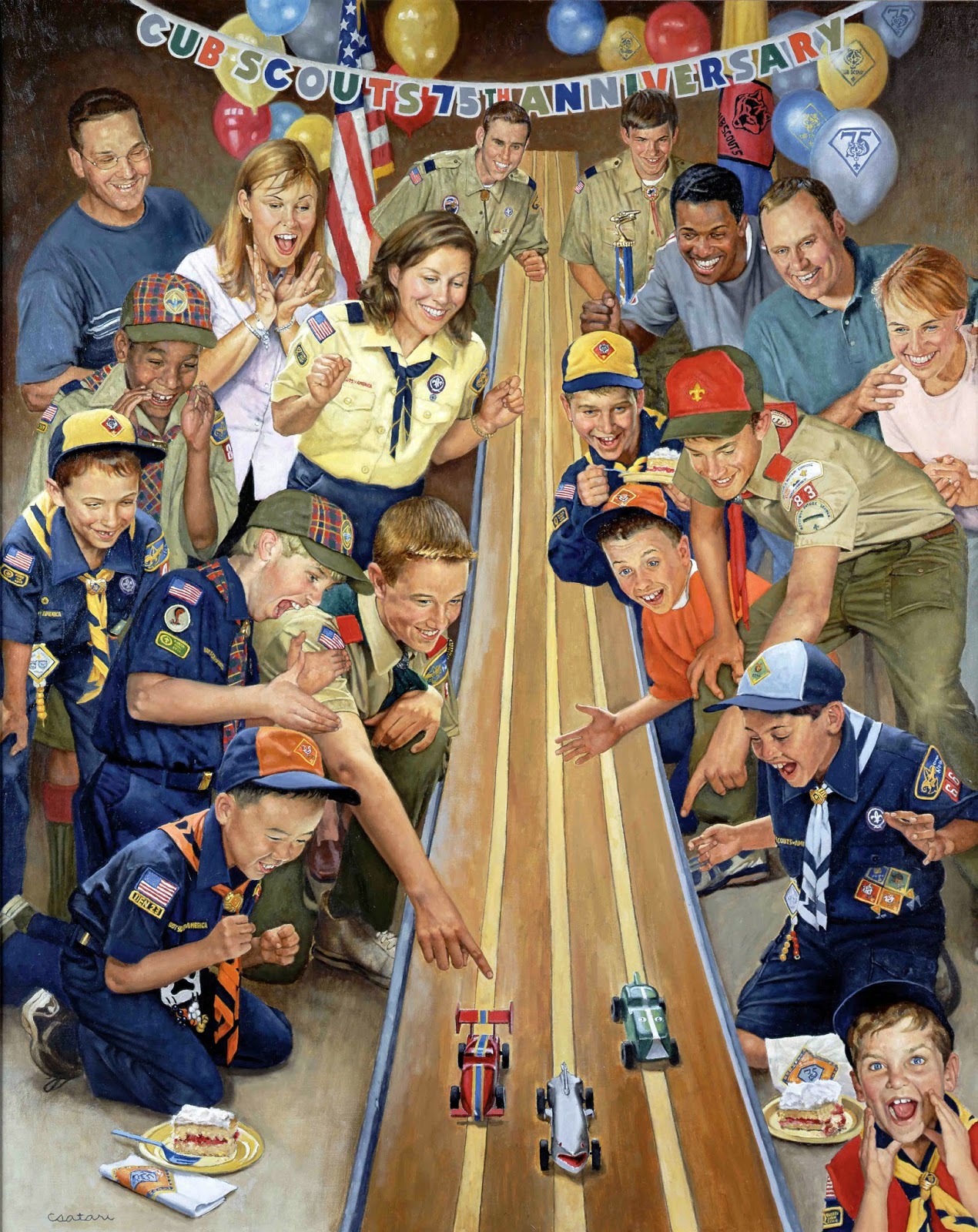 Nor does the emphasis on basic scouting skills deter from the larger education the boys - and the men who lead them - gain from the experience.  Sure, you might not need to know how to tie a bowline in an emergency situation, but the security and confidence you gain from just possessing that knowledge can't be purchased at a weekend seminar.  Scouting deals with all manner of achievement and skills, not just the woodsy outdoorsy stuff.  Learning how to speak in public, learning how to lead, follow, organize, plan, execute, and follow-through is key to success, as you will learn.  And the very act of mentoring a group of boys eager for decisive, knowledgeable leadership forces you to improve yourself so that you do not disappoint their expectations.

You want a workout?  Strap on a 60 lb. backpack and lead a bunch of testosterone-poisoned teens on a rugged ten-mile trek through the wilderness.  Iron is great, in its place, but the kind of robust, constant-workout you get by camping can't be beat.  And Scouting's High Adventure component is like masculinity on steroids.  No one who has returned from Philmont Scout Reserve in New Mexico has done so unchanged. A new Scout reservation is just opening in the East, north of Beckley, West Virginia, that promises to provide even greater opportunities for the men of our nation. It's like the biggest Man Cave in the world, complete with ziplines, STEM center, white water rafting and BMX park. 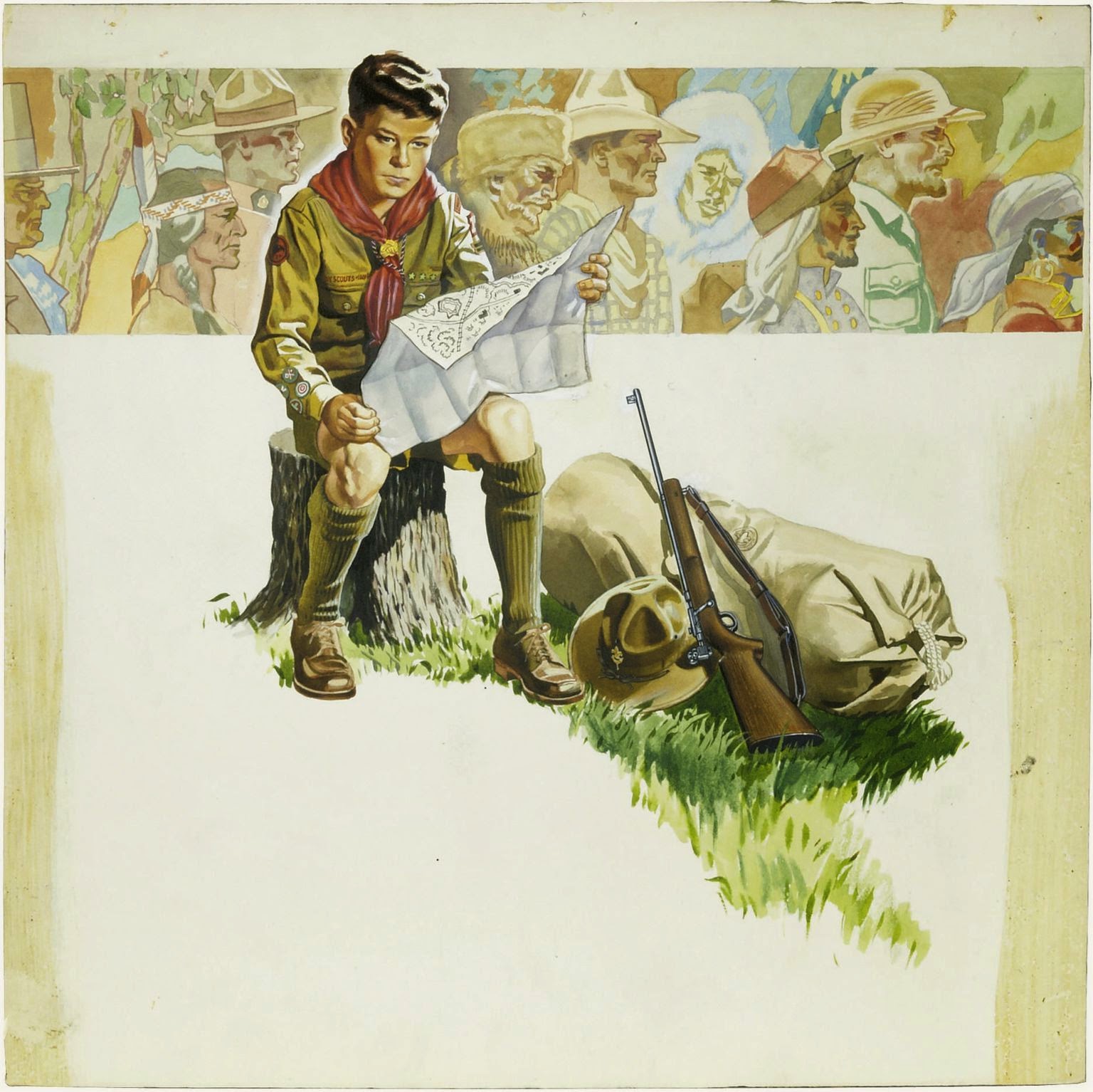 But if you are looking for a low-cost way of improving yourself, a tried-and-tested method of masculine empowerment, a crash course in basic maleness, you can't beat Scouting for the experience.  Sign up to be a merit badge counselor or committee member at first.  Scouting is great at taking advantage of volunteer talents - if you can't handle camping, there's plenty of other stuff for you to do.  But nothing improves your own masculine self-image more than helping a boy recognize his own.  There is nothing more Alpha than helping a boy become the best man he can be.

This would be a great place for any former or current Scouts to detail how Scouting positively informed the men they are today.  You want a quick way to break your Beta and re-introduce masculinity into your life, Scouting is your best bet.
Previous Next