The Manosphere: A New Hope for Masculinity cover

Ian Ironwood
November 20, 2012
The Red Pill Room
Just got the rough draft of the cover design for the book and I thought I'd throw a low-res version up here for comment. 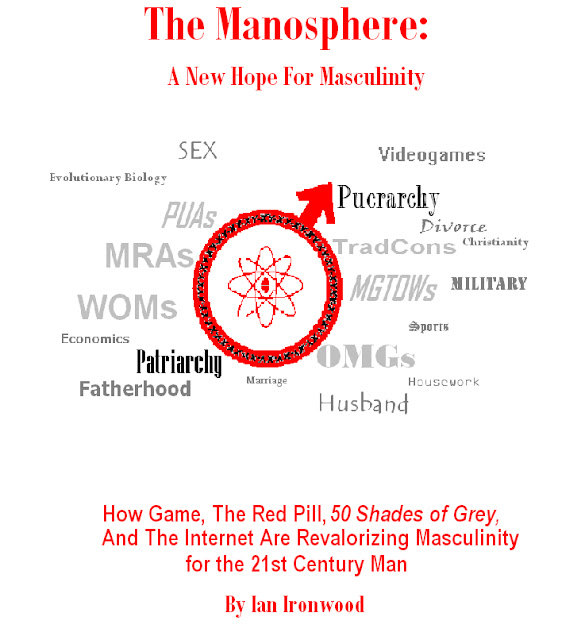 
It's hard to see at this rez, but the black letters in the Mars sign say "XY-XY-XY".

Tentative release date (dependent upon a number of factors including approval from Adam & Eve editors) is set for December 9th.  Which means that when the rough is done and ready for comment, there will only be a week or so for revisions before press date.  Of course, that date CAN be moved . . . but I'd love to get it out by then. Not only is it in time for Christmas, but that's both my eldest son's and Papa Ironwood's birthday -- the two most important men in my life. This book is dedicated to them.  Even if I won't let my 13 year old read it yet.

Here is the proposed copy for the "back cover" promotional blurb.

Welcome To The Manosphere.
Have A Cigar.

The Manosphere is a loose collection of hundreds of blogs focused on male issues and masculine interests.  A relatively recent phenomenon, author, blogger, porn reviewer and sex nerd Ian Ironwood introduces you to this seething section of the blogosphere where a vitally important debate is happening between men, about men, for men, and by men as men.  As feminist authors declare the End of Men, seeing them as the weaker sex in today’s socioeconomic climate, the men they’ve written off are beginning to gather and discuss the current crisis in masculinity with renewed interest in their traditional masculine past and with their eye on the future of men in our culture..

It has been forty years since feminism began its assault on male interests and masculinity, and while it has been a productive ideology for women, feminism has not, as The Manosphere makes clear, done much positive for men, and is responsible for a lot of negatives in our culture.  If feminism foresaw the need for a reassessment of masculine cultural memes in the formative 1960s, this is the belated result.  But feminists are not going to be happy.

In the Manosphere regular, ordinary men are reconsidering what it means to be male in the 21st century and formulating a new approach to life, sex and gender that often ignores feminism or actively sees it as an obstacle to gender relations.  Armed with the anonymity of the internet and access to resources and open discussion with other men, the Manosphere is linking thousands of men around core topics of masculine concern, including women, sex, economics, religion, social justice, education, children, marriage, family and divorce.

Designed to be both an introduction and a survey for the man new to the dirty snowball of the ‘Sphere, The Manosphere: A New Hope for Masculinity explores both the blogs where men are redefining what it means to be male and the greater ailing culture of Western masculinity attempting to redefine itself in a post-industrial, post-feminist landscape.  The men of the new millenia are exploring the meaning of "male liberation" -- but don't expect a sudden surge of male aprons and househusbands to sprout.  Within the Manospere, a “liberated” man is free from the social expectations and cultural obligations traditionally associated with the gender.  Free, in short, from the psychological oppression of feminism as it has evolved.

Encompassing the diverse masculine groups including Pick Up Artists (PUAs), Men’s Rights Activists (MRAs), Wise Old Men (WOMs), and Old Married Guys (OMGs), both the overthrown Patriarchy and the snarky, rude, irreverent and openly-disrespectful-of-women Puerarchy, the Manosphere is a common ground where all men find help in their struggles -- particularly their struggle against a society where being male is often treated as either a crime or a medically-treatable condition.  The Manosphere: A New Hope for Masculinity seeks to take an androcentric look at recent history in gender relations and the future ahead – a future where men work for their own interests, toward their own goals, without judgment or condemnation . . . and more and more commonly without any desire or intention to marry.

Is this the beginning of a new social trend of self-awareness and the pursuit of masculinity?  Just how are the men of the 21st century contending with the problems of sex, love, relationships, mating, dating, marriage and divorce?  How are reproductive rights viewed through a male perspective?  How has Game changed the way the Sexual Market Place works?  How is 50 Shades of Grey indicative of a deep disturbance in the “Force” of feminism?  Just what, exactly, is the Red Pill . . . and why is it known as the “female Viagra”?  And what will the Manosphere mean for men of the 21st century and the women who love them?

Join Ironwood as he takes you on a testosterone-laden journey into the mind of modern man . . . and through the looking glass of the masculine soul as seen by The Manosphere.