Ian Ironwood
June 16, 2013
The Red Pill Room
I've discussed the Red Pill in terms of marriage, relationships, and a general approach to life.  During the last two years or so I have rarely extended the metaphor or the practice into the realm of parenting.  That has been by design - I take great strides to keep my children's childhood happy, that being one of my Wolf Alpha Prime Directives, and discussing them overmuch on my blog endangers that.

However, things have changed in the last few months.  Thanks to some you-wouldn't-believe-it-if-it-didn't happen-to-you events, Mrs. Ironwood and I have been devoting our "abundant free time" to a special project. 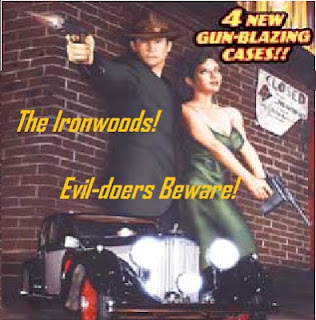 No, really.  The long and short of it is (and about all our lawyers will let us say at this point) is that back in late February, my 13 year old son was abducted by his 23 year old female teacher.  He was safely returned, and was unmolested, but the consequences for my entire family have been fairly profound.  The loss of trust and the loss of security was devastating, and we're still dealing with the aftermath.   If you recall my PLEASE STAND BY post in late February, that was due to the immediate aftermath of the event, and the "Demon's Run" post dealt with the first of several confrontations with various legal and official authorities.

While that battle rages on, another issue was dropped on our doorstep.  The Niece who has lived with us for over a year and acted as our nanny at Stately Ironwood Manor fell in love with a worthless boyfriend with an addiction to that faux canniboid mixture known as "Spice". 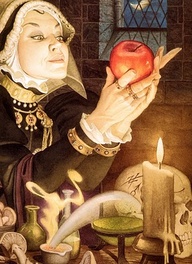 Unlike the fairly benevolent weed cannabis, Spice is essentially some mildly euphoric herbal base like Marshmallow Leaf or Damiana . . . sprayed or soaked in a number of organic solvents and caustic chemicals.  Touted as being "legal" (it's not - most jurisdictions don't have specific laws making it illegal, but the FDA has - so yeah, it's illegal at the Federal level, but most people don't know this and feel helpless to keep it out of their communities.)and sold as "incense", labeled "not for human consumption" (the Spice industry's equivalent of "For Novelty Purposes Only" or "For The Prevention Of Disease Only")  Spice has become extremely popular in middle schools and high schools because of its lack of regulation and how easy it is to get.

The problem is, unlike pot, Spice (sold under a variety of brand names including BIZZARO and Neutronium) is not only easy for them to get, it's also HIGHLY addictive.  Like crystal-meth/heroin/ levels of addiction, plus a violent change in personality that can resemble schizophrenia. Violent schizophrenia.   Some kids smoke Spice once . . . and just never come back.

My Niece's boyfriend got her and a number of other girls to steal for him from their families and friends to support his Spice habit - and of course he got them hooked too.  In just a few months my Niece dropped out of college and began exhibiting all sorts of other classic addict behaviors.  And then our stuff started going missing.  I'm still pursuing the matter . . . and him.

Since then, Mrs. I and I have been collecting data on local Spice vendors, using our Niece (who is in rehab for it at the moment) to inform on her ex-boyfriend's MO and dealers, and we've turned that information over to local law-enforcement, along with the applicable FDA statutes and potential charges.   Believe me, ask anyone in your local law-enforcement agency about Spice, and they'll be happy to tell you what they've seen.

Spice can destroy you.  It essentially "embalms" your lungs, producing a nasty and distinctive hacking cough, it eats holes in various parts of your brain, and it often leads to seizures and violent psychotic episodes.  If there was ever a case to be made for legalizing pot, Spice makes it.

Why am I bringing all of this up?  Because as the Mrs. and I have been hacking our way through this (and I've been trying to hack my way through getting the Manosphere book out) it has occurred to us, over and over, that in interviewing all the teens we have who are addicted to Spice, in just about every case the kid lacked a strong, compelling father figure.  In many cases these kids were raised by grandparents or single moms who just didn't know or didn't have time to watch and supervise their kids adequately . . . and then their jewelry goes missing, and all the Christmas presents she got her kid are in a pawn shop somewhere and their little girl is having inexplicable seizures at school.

With the erosion of "patriarchal", traditionally-male values like Family (as opposed to individualism), Duty (as opposed to irresponsibility) and Honor (as opposed to entitlement) feminism broke the shield that once protected our children from such things as Spice and abduction and tried to replace it with Social Workers, Diversity Training, and "Self-Esteem" lessons.

And I've fucking had enough of seeing our kids' lives get wasted because of such things.  My son told me instantly when he got home what his teacher did, because he knew he could trust me and trust me to do the right thing, whatever that was.  I'd like to think I haven't let him down on this.  Four months into his crisis, we're still grinding away at the various bureaucracies to see justice done, accountability accorded,  and our children protected.  It hasn't been easy, and it's far from over, but he's watching me give it everything I've got, so even if we lose, in the end I've won . . . and so has he . . . just by not giving up.

As we men collectively face the social horror of the 21st century, therefore, it occurs to me that the re-establishment of those sorts of masculine values can only be affected if we re-found the Patriarchy.

Not the way it was - the pre-Industrial patriarchy won't work anymore, and the post-Industrial model got crippled before it really was firmly developed - but in a new way.  We need "rule of the fathers" if we value our children's lives and futures . . . because the alternative is abandoning them to the whims of what feminism has wrought.  And I ain't got not time for that. 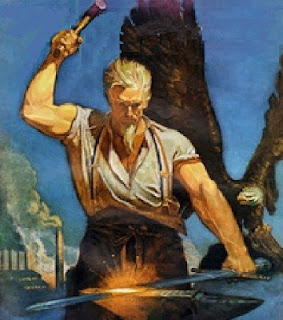 So this Father's Day, I'm officially re-founding the Patriarchy in honor of Papa Ironwood and all the other dads who made it through the Feminist Interregnum successfully.  True, most dads out there today feel unempowered and helpless against the giant bureaucracy that has evolved to keep them from influencing their own children, but that doesn't mean it can't happen.  They may feel impotent in the face of domineering wives or baby-mamas who feel that they and they alone have an active say in parenting.

They are Beta dads, and it is because of their inaction and their unwillingness to stand up to their wives or the system on behalf of their children that stuff like Spice happens to our kids.  Only strong fathers can provide the kind of no-nonsense direction and order a developing kid needs.  Mothers compromise, seek consensus, worry about their child's feelings before the other elements of their lives.  Dads Lay Down The Law.  And if you are incapable of that, you need a dose of Red Pill parenting, stat.

Those men who have, by accident or intention, brought another human being into this world have made a pact with their fellow fathers whether they understand it or not.  I've seen, up close and personal, what happens to a kid who is raised by just a mom, or by a strong mom and a weak dad, and the results fill our psych wards and juvenile detention centers. 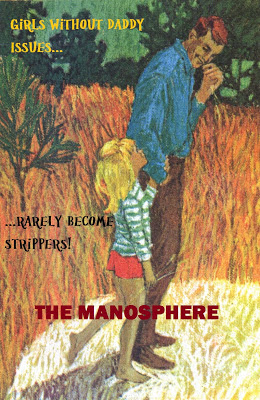 Patriarchy 2.0 isn't the broad-based Patriarchy of yore; it is the quiet forging of strong bonds between all fathers, local and national, to act as a collective defense of our children.  It has fuck-all to do with marriage, as the shattered landscape of our social system has amply demonstrated that marriage and fatherhood are now well-estranged, in general.  Patriarchy 2.0 is smarter, leaner, and more pissed off.  Patriarchy 2.0 isn't pushing for the return of the Traditional Family as much as it is striving for the survival of the families we have.

Patriarchy 2.0 is a 21st century response to the problem of child-rearing, with the understanding that the Diaper Years are, actually, the easiest for a dad to navigate.  Patriarchy 2.0 implies a spirit of activism on behalf of all children, not just your own, and a willingness to ignore the "better" approach of feminism and HR departments.  Patriarchy 2.0 is not opposed to MGTOW, PUAs, or any other aspect of the Manosphere.  We're all just Dads, who are worried about our kids, and we need to look to each other for support and guidance because if we rely on the women in our lives to navigate such treacherous waters, then we are risking the lives of our children and abandoning our duties as fathers.

I'm not saying that Fathering is superior to Mothering, or that Dads are better parents than Moms.  What I am saying is that Fathering is important to both boys and girls, and that Dads can do things, say things, and teach things to children of either gender that Moms cannot.  Most Beta dads are content to back whatever their wife decides; Patriarchy 2.0 insists that Dads get to contest that decision if they don't agree with it, and will step in and take charge when they see the need.  Patriarchy 2.0 says dads deal with their business, and get other dads to help if they need it.  Patriarchy 2.0 says if you see a dad in trouble, you help any way you can.  It may take a village to raise a child, but it takes a Father to drag their ass into maturity.

Fatherhood is a universal male value, and a universal masculine issue.  Feminism has tried for years to destroy the Patriarchy by eroding or eradicating the father-son relationship, and poisoning the father-daughter relationship, the removal of family planning decisions from male hands, assorted other attacks on the very institution of fatherhood, and that's what has given us the mess we currently stand within.  We can either accept it or we can fight against it.  I have some ideas how to fight it, and over the next few weeks I'll be sharing some of them.

Father's Day is about honoring fathers, specifically our own, but henceforth I wish it to reflect on the debt we owe to all Fathers, in all times, in all places.  Fatherhood is such a rare and special commodity, thanks to feminism, that when it does genuinely appear these days it needs to be nurtured, protected, and encouraged like a nascent flame during a storm.  And like that flame, it may become the only light and heat we have in the future to get us through the storm.

To this end I am launching the Ironwood Initiative: a series of pro-active instructions and information on what dads can do to help protect their kids - and all kids - from the dangers they face, and how to bring them into manhood or womanhood successfully.  Patriarchy 2.0 needs guidance, and I encourage all fathers out there to join me in giving the advice and support that all other fathers need.  Patriarchy 2.0 is about Red Pill fathering, and while that's still a nascent and nebulous concept . . . it needs to be done.

Happy Father's Day to you all.  Call your dad.  Ask him what he thinks.  Listen.  And then start approaching the entire idea of Fatherhood from a perspective of masculine strength and tenacity.  Raising a kid ain't easy, but it's helpful if you have a couple of other dads around to help. 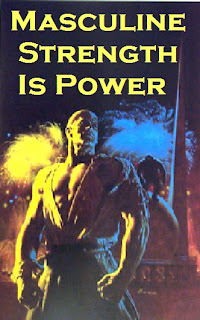