The Wife Test: A Good Worker

Once upon the time, during the glories of the old Patriarchy, one of the astute measures of a woman‚Äôs worthiness as a wife was her ability to be a ‚Äúgood worker‚Äù. 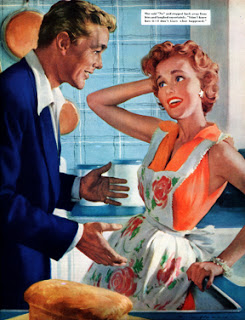 That rankles the tender ears of feminists who see traditional matrimony as little more than chattle slavery (though quite a few have entered into the institution themselves, although not always successfully or gracefully), but at one time it was recognized that a woman came to a marriage to work, and part of her value to her husband and his family was her willingness and capability to do so.

Understand that at the time agriculture reigned supreme, and that before the Industrial Revolution the sheer amount of labor required to keep both farm and home running was impressive.¬Ý It required the combined and complementary efforts of both husband and wife to keep it going.¬Ý As this was usually done in the context of a greater community of kin, such labor could be shared commonly.¬Ý That meant that a woman who came to her husband‚Äôs family‚Äôs farm would not only be expected to tend her husband, but join in the general work-pool of his female kin.¬Ý Therefore a woman wasn‚Äôt judged as much by the men in her life on her ambition and industry, but by the women. 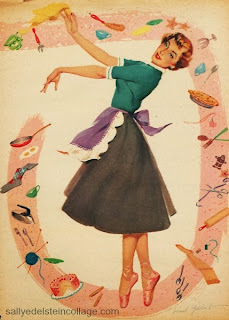 When industrialization and urbanization transformed the role of farm wife to urban housewife, she retained the need for industry merely because urban living before electricity still mandated a lot of labor.¬Ý Add to that the social expectations implicit in urban life, and the wife as ‚Äúhomemaker‚Äù became the 1920s standard that hardened into the 1950s ideal.¬Ý

As electricity and innovation and pre-prepared foods reduced the amount of time required for actual housework, that time was frequently filled by an increase in social obligations.¬Ý She continued to be judged, but no longer on how hard she worked, but how effortlessly and tastefully she decorated and entertained.

As the ideal shifted away from wife as a ‚Äúgood worker‚Äù and toward wife as ‚Äúhomemaker‚Äù, the social pressure increased.¬Ý Nascent feminism sneered at the bourgeois ideal of suburban living and attacked the traditional wife as a slave and a prostitute.¬Ý Seeking to ‚Äúliberate‚Äù these women, the successfully changed divorce laws and family courts into social weapons ‚Äì against their own ‚Äúoppressive‚Äù husbands.

In the 1960s and 1970s calling a wife a ‚Äúgood worker‚Äù in an admiring, Old World agricultural sort of way was to invite an estrogen-filled savaging from all corners.¬Ý Feminism dictated that a woman have value outside of her sexuality in a marriage, yet they riled when hearing praise a given woman‚Äôs industry because such views were seen as ‚Äúpatriarchal‚Äù.¬Ý 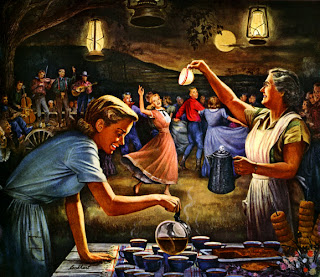 Men who ignored that Old World advice in the post-feminist world have reaped the consequences of their folly.¬Ý Ignoring a woman‚Äôs capacity and willingness to work has frequently been a tragic mis-step in a marriage, and usually one of many on the road to divorce.¬Ý Yet to verbalize a desire for a woman who is ambitious about her life without being arrogant and industrious without succumbing to career burnout or workoholism is to invite just such an attack by misguided women and feminists.¬Ý If we even think such things ‚Äì as too few of us do ‚Äì then we keep them to ourselves.

But the truth is we value ambition and industriousness in a woman, among other traits.¬Ý A woman who won‚Äôt work is a curse on a hard-working man.¬Ý Far from being an ‚Äúequal‚Äù relationship, a wife who suddenly becomes unemployed, under-employed, or unemployable after the wedding is going to hang around the neck of the marriage like a boat anchor.¬Ý Unfortunately, such lack of industry usually comes in tandem with a higher desire for material signs of her ‚Äúsuccess‚Äù, almost always at her husband‚Äôs expense.¬Ý

On the other side of the coin, a woman who doesn‚Äôt know when to stop working, or forgets sight of why she is working, is also a danger.¬Ý Pledging your life to someone who is already married to their job is a recipe for marital disaster.¬Ý And some women feel about their jobs the way they do about their relationships and treat them with similar gravity.¬Ý If she‚Äôs unwilling to shift her career to accommodate the needs of the marriage, then that‚Äôs a serious down-grade. 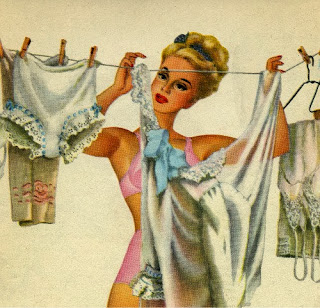 Being ‚Äúa good worker‚Äù isn‚Äôt just an evaluation about her employment status and potential, it‚Äôs an evaluation of her character when you broaden your scope to include old-fashioned housework and industry in general.¬Ý If she cannot plan, start, persevere through and finish a job, and then clean up her materials, then that is not a good sign.¬Ý If she is unwilling to learn or display this skill, doubly so.

It is hard to judge how good a worker your prospective bride is without significant acquaintance.¬Ý The fact is, it‚Äôs as easy to fake the perception of being a good worker in the short term, but after a few months of hanging around you should be able to spot some trends one way or another.

Here are a few things to look for:

Does she ask for help even if she doesn‚Äôt need it?¬Ý
Does she try to get you to do her work for her?
Does she have a hard time planning the project? 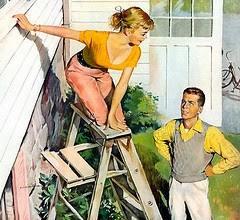 Does she have a hard time starting the project?
Does she have a hard time finishing the project?
Does she clean up after herself?
Does she take breaks . . . and how many?
Can she stop the job short of perfection?
Can she do the job without invoking nasty self-criticism?
Does she take pride in the work she does?
Does she seek your approval for her work?
Does she doubt herself and look for validation from you?
Can she accept constructive criticism when it is invited?
Does she need you to watch and/or act as a cheerleader for her efforts?
Does she know when to stop, or does she insist on continuing long after she was finished?
Does she work efficiently? ¬ÝHow long did it take her?

There are other things you can glean about a woman by the way she works.¬Ý How ambitious she is, for instance. ¬ÝIf she's not ambitious enough to even want to impress you, then she's unlikely to be ambitious on your behalf. ¬ÝYou should not judge her the same way you would judge a man, for women and men take different approaches to work, in aggregate.¬ÝBut you can judge her on demonstrating her mastery of the basic elements of work and prosecuting a project through to its conclusion. ¬Ý

So how do you judge how well a woman works?¬Ý Have her paint a room.

This is the simplest method of determining how she approaches the mundane but necessary tasks of normal life.¬Ý Painting does not require a high skill level, it has a very common-sense set of instructions, it has a definite preparation and clean-up, and unlike the challenge to bake or clean, it is safely gender-neutral.¬Ý

But you can tell a lot about a woman by how she paints a room.¬Ý To conduct this test, pick a fairly small room, select the paint, and acquire the tools.¬Ý The next time you have some time to ‚Äúhang out‚Äù, instead of rewatching Walking Dead on DVD, pull out the bucket, brushes, rollers and tarps and ask her to paint the room. ¬ÝIf she tries to plan something, tell her that you plan to paint that day and invite her over to help. ¬ÝIf she tries to avoid the work all together, then she's not serious - a woman who wants to spend time with you won't care much what you will be doing.

If she looks like you are crazy, tell her that you want to see if she can do it.¬Ý Be honest that this will be an assessment. ¬ÝIf she presses, admit that it is a test, and if you feel confident enough to pull it off, go ahead and call it a Wife Test.¬Ý Sure, it will put her on her guard, but she will also ‚Äì hopefully ‚Äì understand the utility of the test, and jump to the question of why you might be evaluating her for such a position.¬Ý If she doesn‚Äôt, that, too, is valuable data for you to have.

Don‚Äôt judge her too harshly on the ultimate job.¬Ý The test is not of her painting ability, but her ability to start and finish a job, preferably without your help.¬Ý If she needs you to do everything from open the can to showing her how to use the brush, then you know she will likely not work diligently without oversight.¬Ý

If she tries to bribe you into doing it, or tries to change the plan to do something else, then you know she isn‚Äôt eager to tackle a real bit of work.¬Ý If she complains bitterly about it every step of the way, sloshes paint on everything, does a half-hearted job and tries to make it everything else‚Äôs fault ‚Äì from the brush to the roller to the kind of paint you selected ‚Äì then you know that you will be bearing the brunt of the responsibilities for the rest of the relationship.

If she doesn‚Äôt think painting a room is indicative of her wifely skills, and acts indignant about it, then she doesn‚Äôt understand what marriage is about yet.¬Ý She might not ever.¬Ý

But if she presents you with a well-painted room without any splashes of paint, a cleaned-up work area and put-away tools, then you may just have a winner.¬Ý If she does so without complaint or the need for direction or hand-holding, then move her to the head of the line.

It‚Äôs the little things like this that make proper vetting so vital.¬Ý A man who knows what he‚Äôs getting has no excuses later on.¬Ý A man who thinks that his ‚Äúhelpless‚Äù girlfriend will suddenly transform into a hard worker with the application of a little wedding cake is a fool.¬Ý 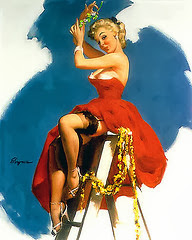 Ambition & Industriousness are two of the most important elements that a man looks for in a woman, according to recent polls.¬Ý That doesn‚Äôt mean he wants a corporate warrior who never has time for a husband, but it also doesn‚Äôt mean he wants a fainting flower who can‚Äôt make the bed without management.¬Ý Good wives know that a working on their relationship implies a fair amount of good, old-fashioned work.¬Ý¬Ý

If they aren‚Äôt willing to do that, what makes you think they‚Äôre going to treat their husbands right later on, when he‚Äôs the only one who knows how to work?

Any other ideas about how to judge a woman's industry and ambition?
Previous Next