Three Alpha Moves To Use On Your Wife 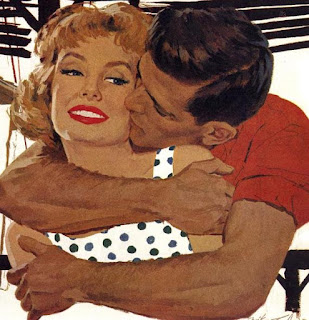 I’ve been hit with a bunch more requests for new Alpha Moves since the book came out (thanks for all of you who indulged me), as well as requests for books on Girl Game, Wife Selection, and Reclaiming Masculinity, among other topics.  And I assure you, I’m working furiously on long, thoughtful posts covering all of these topics as well as such diverse subjects as the Boy Scout homosexuality decisions and the pros and cons of secretly tracking your female co-workers’ menstrual cycles in an effort to more skillfully navigate the troubled waters of a high-pressure mixed-gender office (creepy invasion of privacy, or legitimate tool of Office Game?  Comments and suggestions on all of the above are always welcome).

But since I love low-hanging fruit more than the next sex nerd, I’m going to do three quick-and-dirty Alpha Moves you can choose to incorporate into your own Red Pill regimen, or at least consider.  Besides, I’ll be able to flesh these out more later for the second volume of the Alpha Move series, and I am nothing if not motivated by laziness. 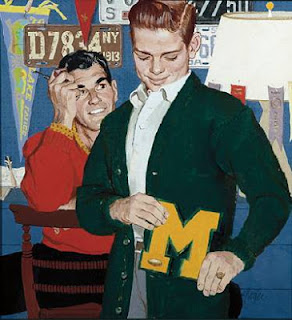 One of the ubiquitous signs of feminine success in the corporate world is the sight of some poor cube slave trudging her way across the parking lot, her spine horribly bent out of shape with an over-full backpack, purse, coat, lunch bag, umbrella, and sundry other items depending upon her profession all dangling from one shoulder.  The book bag/laptop bag has become as much an indicator of station in the post-industrial world as ink-stained fingers were in the industrial.

The stubborn pride on the faces of many of these women as they lug their professional lives around is born of either a plucky determination in the best corporate feminist sense, or out of a genuine dedication to their work and the anticipation of lunch hour.  Either way, whether they carry it on their shoulder or tug it behind them on wheels, it’s difficult to appear gracious and feminine when you have thirty pounds of work materials weighing down one shoulder.

Mrs. Ironwood is not exempt from this situation, thanks to her professional standing.  Of course she came by it honestly, having been a book-lugging nerd since middle school, but as she’s become more experienced (see how I did that, Gentlemen?) she’s learned to appreciate the benefits of an intact spine.  Therefore bearing the burden of her book bag and assorted professional paraphernalia is a dreaded chore in the morning.

It’s not automatic, and it’s not expected.  If I do it unsolicited, she never fails to smile sweetly and thank me, not like we've been together twenty years but like we were in middle school and I was helping her carry her Algebra books to class.  Some might class it as “chivalrous”, and a case could be made for that, but like all chivalry it must come from a place of strength and grace, not expectation and obligation.

But Mrs. Ironwood doesn’t hesitate, if she feels the need, to invite my chivalry.  If she knows she’s going to have issues, she very politely asks if I would mind helping her with her bag.  Unless she’s been “bad” lately (a very rare occurrence), and as long as she doesn’t presume that my answer will be yes, I have no problem doing it.

It’s a little thing, but one she appreciates.  She’s also let me know that the sight of me hefting that much luggage on one arm reminds her of my strength and my service to the family, a lovely Alpha-Beta panty dampening combo.  And when I meet her at the car, after I’ve stowed it away, she never fails to cuddle up, kiss me sweetly, and thank me for carrying her books.

Alpha Move: Tuck Her In 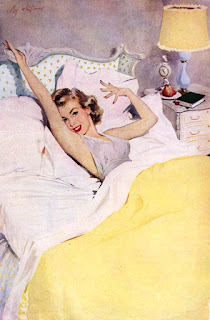 In case you missed my first post of the year in which I detailed my Red Pill Observations and Resolutions, one of the things I’ve noted about male-female interactions is the positive Alpha nature of “fathering” your wife in small but symbolically important ways as a means of establishing your dominance and protectiveness over her.  It’s important not to do this in a demeaning or condescending way, but if there’s a woman out there who lacks Daddy issues I’ve yet to meet her.  Psychologically filling in for either her own Daddy or the Daddy of her dreams is an outstanding way to make a good Alpha presentation without recourse to a bar fight. 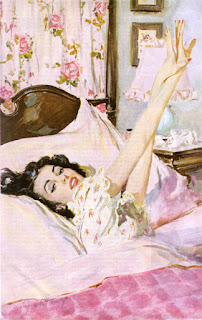 Mrs. Ironwood clued me into this a few months ago.  As long-timer readers know, I’m a huge advocate of a Red Pill man making the bed every morning as a means of “marking his territory”.  But Mrs. I doesn’t hesitate to mess it up as soon as she gets home.  By the time we’re ready for bed, my well-made bed is long gone.  Ordinarily, I just shrugged it off and got under the covers anyway.  But right before Christmas I got irritated at the mess, and after she crawled into bed, I ripped the sheets and comforter off the bed.

She stared at me, wide-eyed, no doubt curious if a ravishment was immanent.  It’s been known to happen.

Instead, I grabbed the top sheet and flipped it up and over her, allowing it to settle perfectly on her.  I repeated the process with the comforter, and then crawled under myself a moment later with a sense of satisfaction . . . and to a delightful giggle.

“That was fun!” she said, amused.  “I forgot how much I enjoyed that when I was a kid.”

I didn’t think much of it at the time.  But it quickly became clear that this was important to her, because the next night the covers were messed up again, and she hopped up on the bed and looked at me expectantly.  I almost missed it.  But then I grabbed the sheet and snapped it over her head again.  She looked at me dreamily.  Thrillsville. 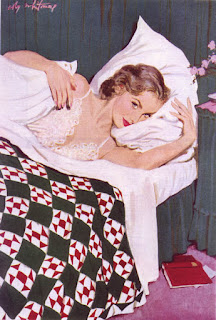 “I just feel so . . . protected, safe, warm, loved,” she tried to explain when I inevitably tried to deconstruct the move.  “My daddy did that when I was a kid.  He tucked me in every night he was home.  It was a powerful ritual.  When you do it . . . well, it’s not sick or anything, but it does remind me of my father and how he made me feel when he did it.  But it also reminds me of how tall and strong you are, watching you spread your arms out so wide and handle the sheet so effortlessly.  It’s kinda hot.”

The move has quickly gone from being a stray bit of fathering to being a “thing” of ours, in and of itself.  It’s kind of the second act to making the bed in the first place . . . and if I’m going to stay up while she crashes out, instead of crawling in I sit on the side of the bed and literally tuck the blankets in under her.  And if she’s tucked in thoroughly enough, it’s not like she can really stop me from kissing her pretty much anyway I want, can she? 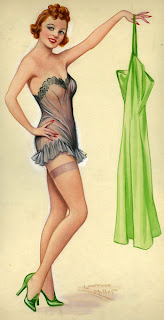 Believe it or not, some dudes have a hard time with approach anxiety . . . with their own wives.  If they've been bingeing on Blue Pills for decades, it's easy to see why.  Trying to get busy on a non-Designated Marital Sex Night without filling out all of the Blue Pill paperwork is a bitch.

So when men do start taking the Red Pill, and finally understand that their sex lives are largely in their own hands, they often come up against approach anxiety as one of their first hurdles.  Suddenly going from "May I have some pussy, please?  I've been a good boy!" to "Let's fuck!" can be disconcerting for both parties, and you can't get to the latter without some confidence and preparation.  Indeed, how you initiate often sets the tone for your Alpha/Beta level for the day.  Come off all Beta, and any pussy you get will be purely by accident.  Affect a strong Alpha presentation, though, and pussy becomes manifest. 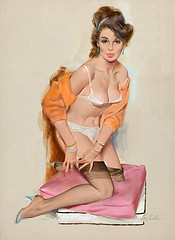 To make the transition easier, feel free to steal a play from my book.  Before I even took the Red Pill, there was a period just after we got married where Mrs. Ironwood seemed bound and determined to criticize everything.  In retrospect there were good reasons for it, but at the time it just sounded like nagging to me.  That's when I discovered this neat little play.

Mrs. I had just gotten home from work (pre-kids) and was unloading about her day in gross detail.  For some reason that segued into her sister, and from there to her mother, and once that happens criticism is usually close behind.

". . . so Mom thinks it would be great if she came over and helped you with the lawn.  I know you're always reluctant to do it after what happened to your uncle, but we live in a real neighborhood now.  Our neighbors will hate us if . . ." 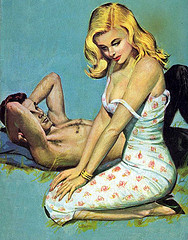 I was only half listening, of course, but it would be rude to ignore her totally.  Instead I started to amuse myself, because the last thing I wanted to hear was criticism about my housekeeping/yardwork indirectly from my mother-in-law.

So I reached out and unbuttoned her top button.  She didn't even blink, she was so intent on her story.

So I undid the next one.  This time she did blink, but then ignored it and continued on, unphased.

So I undid the third button, revealing her bra, and she couldn't very well ignore that. 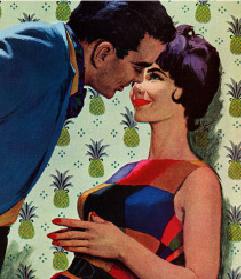 "The leaf blower, I was listening.  Does she think it would be cheap enough?"

I considered.  "Nagging turns me on.  Go ahead, do it some more.  Tell me about how the gutters really, really need a good cleaning.  Make it sound dirty."  I unbuttoned another one.  Only one left.  The Girls were just about hanging out, now, and she was blushing.  It's always adorable when she blushes.  But she didn't stop me.  She looked amused, annoyed, intrigued, and irritated.

"Is that what it's going to take to get you to listen to me?" 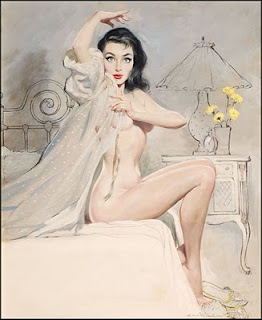 While she was speaking, I turned her around and undid her bra.  I didn't take it off just yet, just let it hang there from her shoulders.  Then I reached around and unsnapped her jeans.

"You aren't really paying attention to this, are you?"

"Sure I am, babe.  Mexican drug cartels, the submarine, a platypus, the one-eyed man, I got it.  Continue?"  Both bra straps at the same time.  The pretty black lace contraption fell from her shoulders like ripe fruit.

"I'm listening!  Come on, nag me some more!  I'm almost there!"
"You are the most infuriating man--" 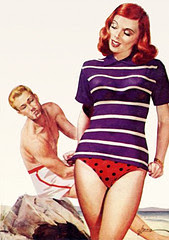 One tug.  Jeans came off.  I couldn't have written it better.

"You want to finish this conversation later?" she asked, lamely.

Undressing your woman in such a straightforward fashion may not explicitly be considered an "approach" or an "initiation", but if you can't make the leap from here to there you need remedial help.  She might protest -- that's fine.  If she insists, you desist.  It's as simple as that.  But if she stops you, you walk away and leave her as undressed as you got her.  Give her one casual smile as you walk out.  If you've got the balls, pantomime "Call me!" with your hand as you go.

You might not get all the way to the panties, but next time she's going to think twice about the nagging.