Ian Ironwood
June 18, 2014
The Red Pill Room
Riffing on a great post over at Just Four Guys, today's lesson, Gentleman, is about your potential bride's Warmth and her Disposition.  Those are two elements of the female character which are strongly indicative of her suitability to the job, and all too often they are overlooked by the lovestruck or overshadowed by a busty figure.  Your wife's appearance and attractiveness may wax and wane over time, but her warmth and her disposition is a constant in your life.  It should therefore be highly weighted in your determinations. 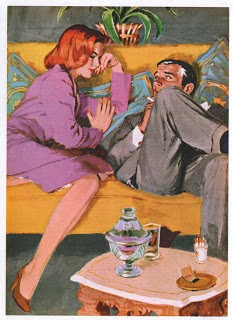 "Warmth" is one of those difficult-to-define terms that has a strong subjective component.  You might not be able to tell what it is, but you know it when you see it.  It is among the most enduring of feminine characteristics, sometimes not fully emerging until motherhood.  It is also frequently attacked by feminism as a gender-based stereotype, therefore decreasing its value among the adherents of this ideology.  Disposition, likewise, has been lambasted as a weakness by masculine-oriented feminists.  A traditionally feminine disposition, pleasant and attractive, has been called into question by corporate feminists who see it as a needless departure from their leaning in. 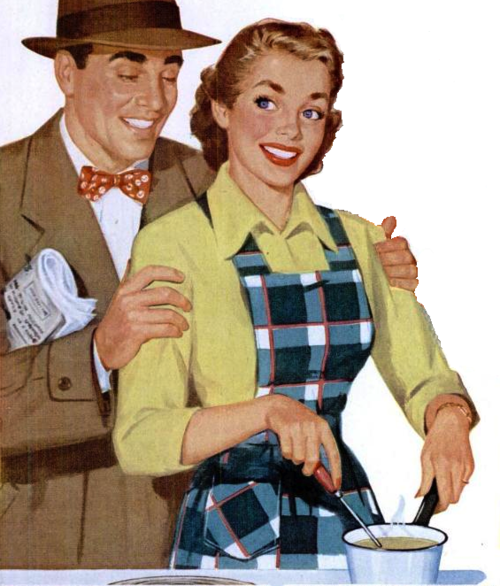 But warmth, and a pleasant disposition can be a key factor in both initial attraction and ultimate mate selection.  Both attributes depend largely on that most valued of female traits, a woman's Receptivity.

Distinguished from her willingness or ability to be submissive, men value receptivity in a woman.  That is, her willingness and ability to be open to his ability to order and invite.  A woman who is not generally receptive will rarely be receptive, suddenly, to her husband's leadership, no matter how strong a leader he is.  By abandoning her receptive nature, many modern women have unknowingly also abandoned a key feature of their allure.  "Warmth", as a characteristic, is the expression of a woman's social receptivity; being "warm" means that she is receptive to casual social interactions, including the comfort and ease of those around her. A Pleasant Disposition, on the other hand, is a token of a woman's receptiveness to establishing harmony in her environment through answering verbal and nonverbal calls for support.  If either one of these things is missing in a given woman, the prospect of her being a good wife goes down dramatically.

Such receptivity isn't overtly submissive or self-effacing in nature.  The strongest, most feminine women I know manage warmth and a pleasant disposition through even trying times, mustering a grace and charm through difficult circumstances that is the epitome of mature femininity.  Neither is it martyrous self-sacrifice.  It is born of a woman's deep compassion and care for the others in her life, and her desire to maintain an admirable social position.  It is quite possible to be warm, pleasant-natured, and still maintain strong hand in the relationship.

A woman communicates her warmth in part through her level of attention: eye contact, verbal cues, appropriate questions, understanding of the social context, etc.  And it is not just a good idea to pursue this test for the prospect of a peaceful marriage, it can also indicate the strength and stability of your union. And therefore its durability.

The JFG posting points out a fascinating study in which men and women in relationships were observed making verbal and non-verbal "bids" for attention and intimacy.  Those partners whose "bids" were answered with a corresponding acceptance of intimacy or interaction tended to do better as long-term prospects for marriage.  Couples who ended up divorced after 5 years had a bid ratio of less than 40%, whereas couples who seemed to have solid, stable relationships tended to answer each others' bids more than 80%.  How accurate was the theoretical prediction of a couple's success in a LTR - that is, not get divorced?  How about 94% accurate?

The study demonstrates just how important warmth and pleasant disposition really are in a Red Pill marriage.  Women who can cultivate their personal warmth are making themselves more receptive to their husband's bids.  While some of those bids are going to be sexual in nature, inevitably, women who have warmth are likely to return the bid with a counter-bid or at least an acknowledgement that can often soothe her partner's desires for intimacy and validation without any panties coming off.  Women who lack warmth won't bother to look up when their men give a casual interpersonal bid on a favorite activity for him that bores the hell out of her.  Women who lack a pleasant disposition often won't answer a bid for attention that doesn't immediately gratify them in some way.

So how do you determine a woman's warmth and disposition?  You count it. Just like in the study. 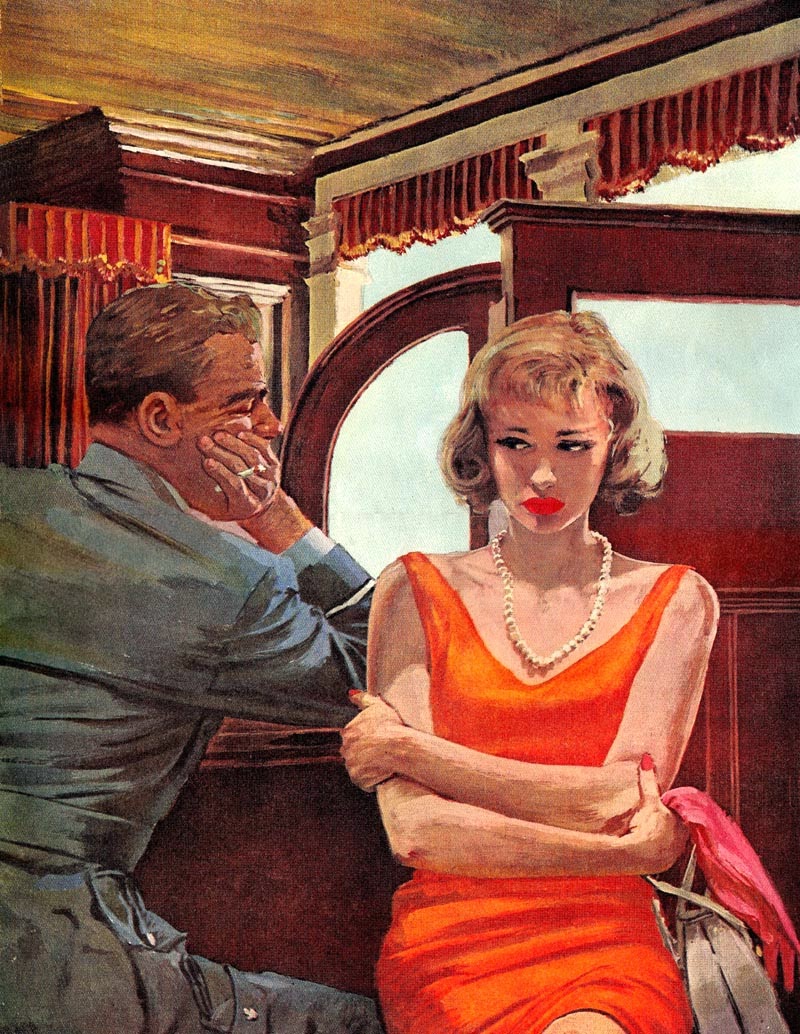 Carefully observe your interactions with your candidate woman over a period of, say, two hours of alone-time.  Mentally track the number of interpersonal "bids" you offer her, as well as the nature and degree of her response.  Try to work in a set number of bids for the period: ten, twenty, or twenty-five.  They don't have to be all that involved - "look at that cool car!" or "what do you think of my new boss?" or "I'm feeling like Mexican for lunch" are all decent bids.  Try to keep them somewhat neutral, not inviting either a summary dismissal or lengthy response.  Just simple, straightforward conversational invitations.

For each bid, observe how she reacts.  Eye contact, verbal acknowledgement, open validation, or at least rapt attention (with her body language clearly turned toward you) are all "wins" of your bid.  Noncommittal grunts, blank stares at her cell phone, inattention and stony silence are all "lost" bids, as are bids that fail because of her closed or turned-away body language.  Insulting, vulgar or degrading language subtracts a point.

Don't let your reaction to her answers color how you offer the bids.  Nor should you allow one poor performance be the sole determiner of a woman's warmth and pleasant disposition.  Try this several times and keep track of her averages.

As far as scoring, simply give her a point for every "win" and no points for a lost bid.  Within a two-hour time period, if she responds positively to fifteen of the bids and negatively to ten others, you can assign her a Warmth and Receptive score of 60%.  If she responds positively to 20, then she's starting to move into the Warm category.  But that's why you repeat: everyone has bad days.  The problem is when those bad days start piling up, and that warmth you once felt from her keeps falling. 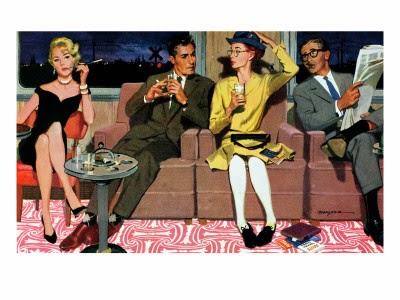 Likewise you can test how pleasant her disposition is by observing her reaction to unfortunate news. Women who make every misfortune (whether it happens to them or not) into a tragic crisis worthy of a blow-up are failing the "pleasant disposition" test.  So are those who ride the emotional waves of other people's baggage.  The willingness and ability to consciously be receptive to negative stimuli and provide positivity in return is the essence of "pleasant disposition" - and it doesn't mean a woman is an ineffective communicator or leader by doing so.  On the contrary, the very best women leaders I've known and followed have excelled at being pleasant, no matter the circumstances.

Consider her scores in a variety of situations, too.  Observation of her warmth with others gives you perspective into her character.  See how warm and pleasant she is in a formal setting, a casual setting, a semi-formal setting, with your kin and your friends, and among complete strangers as well as her score in your private interactions.  Every time she responds openly and receptively, she gets a point.  Every time she ignores or snubs a conversational bid for no good reason that you can see, no point.  Every time she says something insulting or derogatory about someone, subtract a point (unless it's someone you don't like, in which case praise her for her keen insight.).

Again, this test is highly subjective, but it allows your direct observations of her behavior to influence your decision to commit to a relationship, not a "feeling" or "just knowing".  A warm, pleasant wife leads to a happy, pleasant life.  Thinking you can transform a cold shrew into a friendly, receptive mate is most often an exercise in futility.  And if it takes her a few drinks to really "warm up", that, too, is telling. 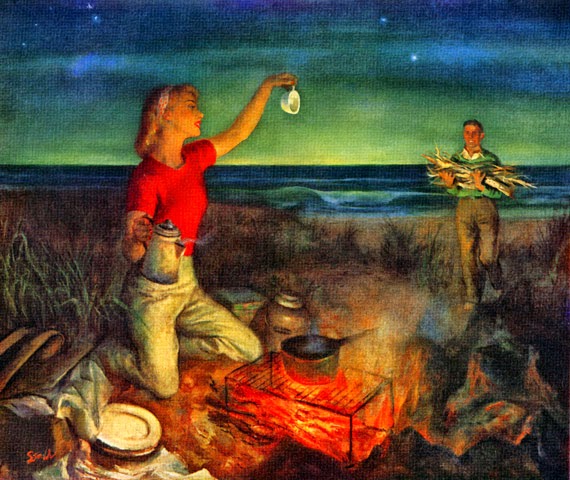 This exercise is helpful for gauging your own interactions as well.  Most men aren't conscious of the cues and bids women constantly offer them in their non-verbal, contextual multi-track communication style.  We prefer the more direct and simplistic single-signal communication styles that develop between men.  But being mindful of her body language and linguistic mannerisms makes you more sharply attuned to when she's offering subconscious commentary on her mental-emotional state, including her current level of attraction to you.  If she's been warm and open to you all afternoon, and you know sex could be on the table, then when she offers a bid for sexual intimacy maybe you won't miss it the first few times around.

It also makes you aware of your own responsiveness.  While male dominance is the preferred remedy under the Red Pill, remember that that doesn't mean domineering.  A good captain is always receptive to constructive input from the crew, particularly his First Officer, and giving proper attention to sincerely-delivered bids from her helps deepen her own attachment and attraction to you.  Grunting might be manly and Alpha, but subtle transactions of attention work in both directions.  Acknowledging her bids and participating in what seems like mindless, pointless discussion is actually re-affirming and validating your interpersonal attachment to each other. This exercise will help hone your ability to be responsive to her perspectives, even if you don't agree with them, and make her feel more secure in the strength of your interpersonal bond - without demanding control of the relationship.

It's quite possible to maintain hand and take a strong leadership position and still accept enough of your wife's bids so that she feels the flow of emotional intimacy, even when you're being strong and silent.  Indeed, compounding the two tends to work very well.  Mastering the art of responding to those bids is the responsibility of both parties, but the importance of this cannot be understated: 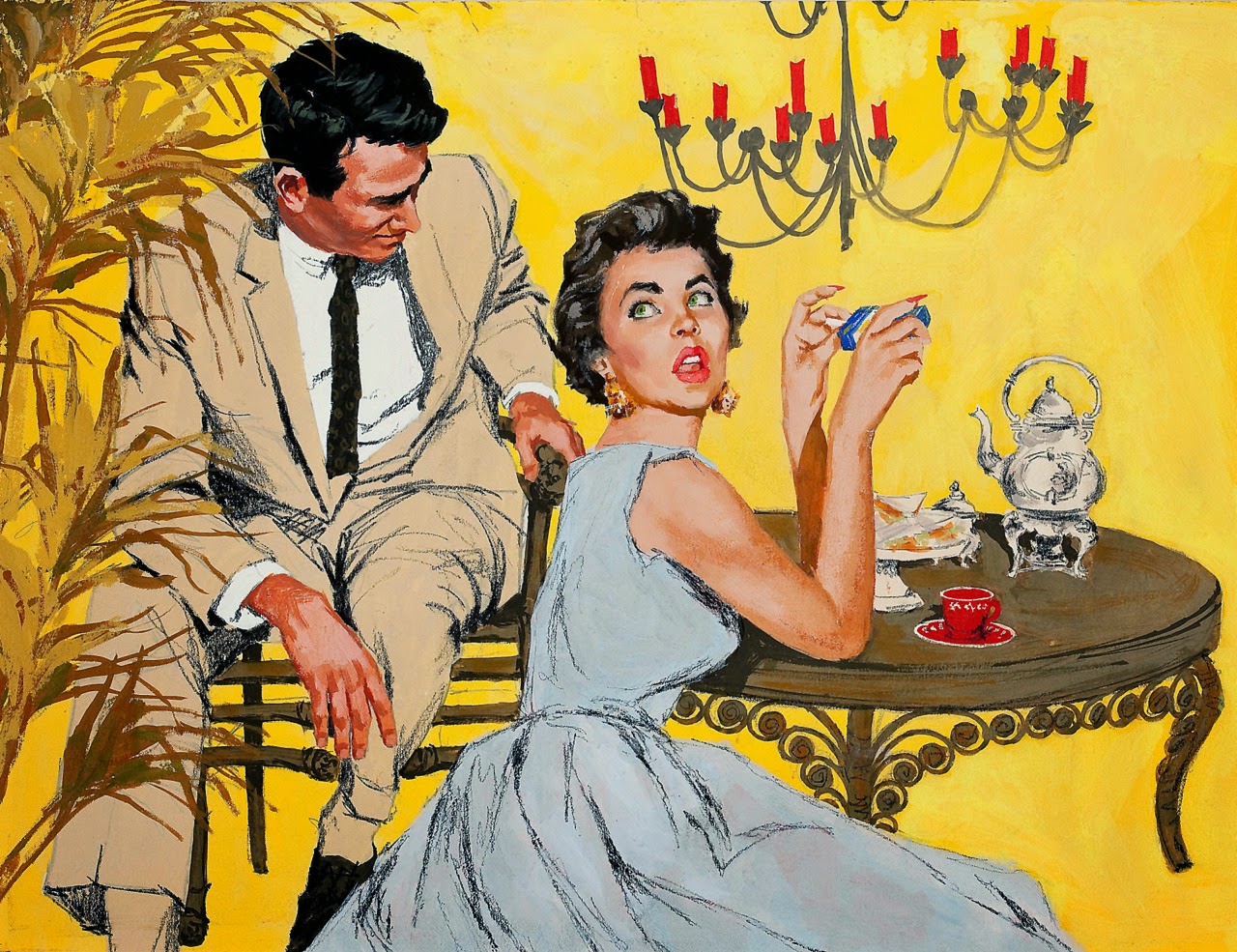 Contempt is the number one factor that tears couples apart. “It’s not just scanning environment,” chimed in Julie Gottman. “It’s scanning the partner for what the partner is doing right or scanning him for what he’s doing wrong and criticizing versus respecting him and expressing appreciation.” 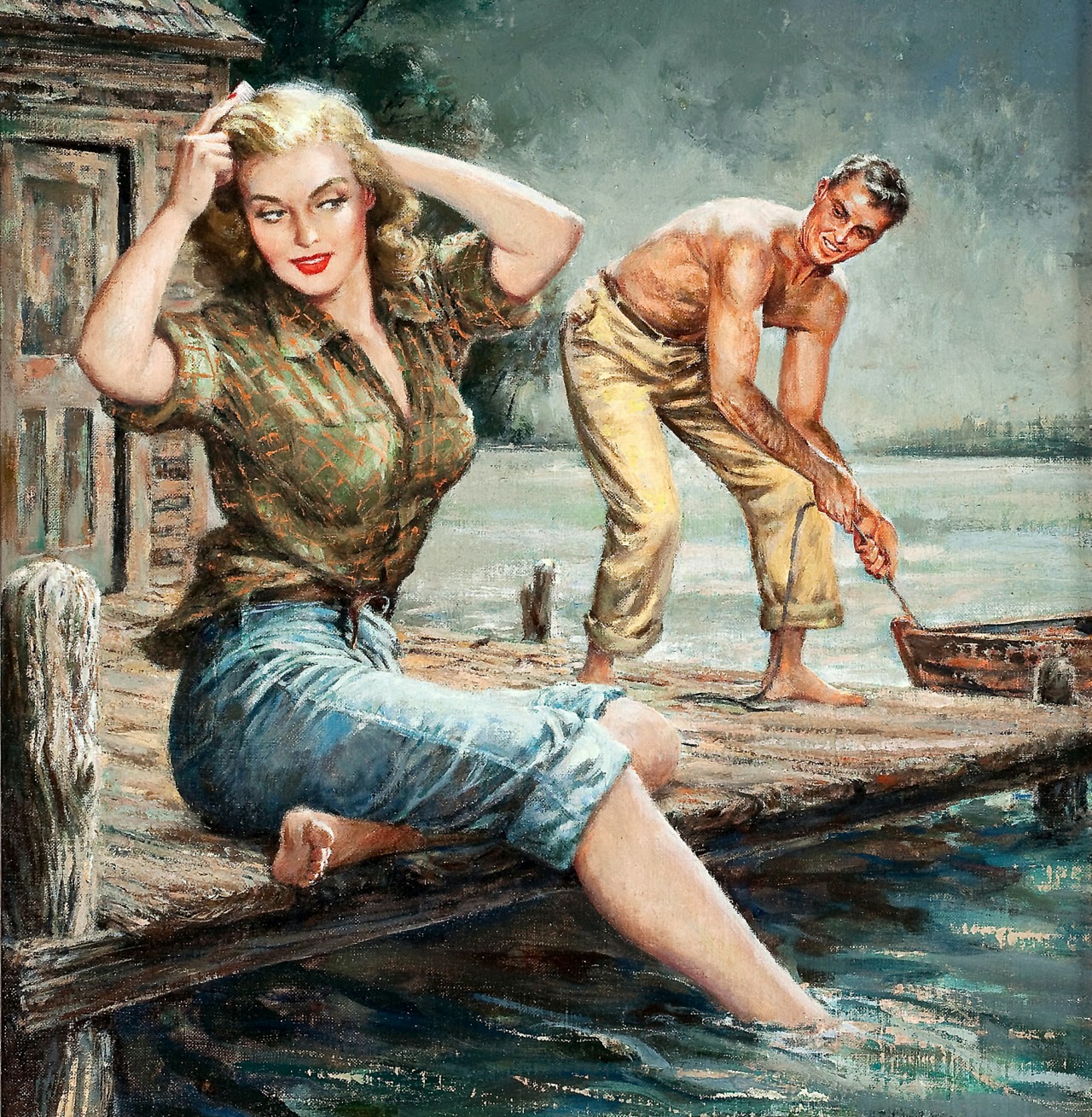 Take a good, hard look at your potential bride, Gentlemen, and give her an honest, sincere examination of her warmth and disposition . . . and thereby her receptivity.  Warmth and a pleasant disposition: two essentials for any lasting Red Pill wife, and both springing from the feminine fountain of receptivity.  If she can't or wont accept your bids (or you hers) at least 80% of the time, it's probably not a good match.