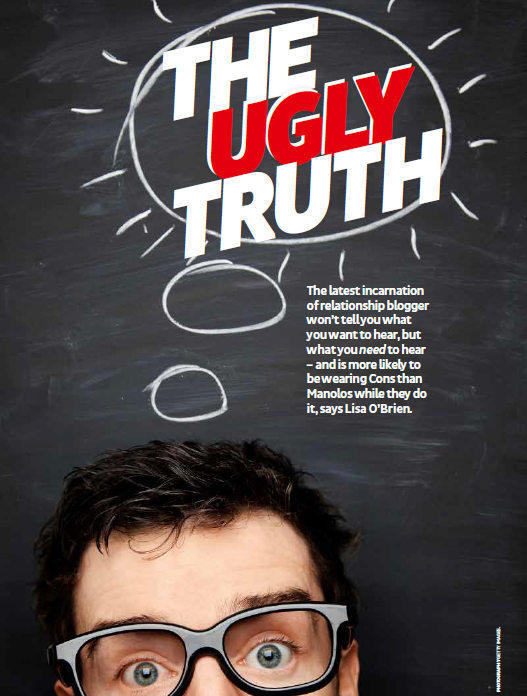 I was contacted a few months ago by an editor from the Australian women's magazine, CLEO, asking if I could answer a few questions for an article that would be in their March 2014 issue. I agreed, and we exchanged the questions by e-mail.

In the end, my answers were quoted considerably in the article, as was the post Men Don't Fall in Love the Same Way Women Do. The editor was kind enough to send me a hard copy of the magazine, as well as an electronic copy of the article, so I've included it in full as images in this post (you can click on the images to enlarge them, or open them in a new tab or window to zoom in and read the text).

1. How did ‘The Rules Revisited’ come about?

I’d say The Rules Revisited was conceived out of the convergence of three factors in my life. The first was the process that I went through myself in learning how to attract women. This started soon after I graduated from college, and in many ways is still on-going; but it showed me that self-improvement is a very real possibility – even for someone like me, who at first felt utterly powerless with the opposite sex. The second was my love of writing and the need for a substantial way to exercise it. Initially I considered starting a blog for men, but most of the ideas that I found engaging and useful had already been pretty well articulated by others. The third factor was the recognition that, in spite of there being this vast network of men producing material to help each other improve their chances with women, there really wasn't anything out there for women trying to improve their chances with men. It felt a bit one-sided, especially because I knew from my own dating experience how badly the advice was needed. With that realization, the concept of the blog was obvious, and I immediately sat down to write the first few posts. I haven’t stopped since.

2. Your advice is quite blunt and to-the-point – what was the initial response like from readers?

It was very positive, actually. To this date, I've never received a single complaint about the tone of the blog being too harsh or too blunt; but I've received hundreds of e-mails from readers expressing their appreciation for the bluntness specifically. In hindsight this doesn't surprise me. Women today are absolutely starved of honesty. Less attractive women are constantly told that “inner beauty is all that matters” (yet their experience tells them exactly the opposite), while more attractive women are plagued by the insincerity of men trying to get them into bed, or being transparently nice to them just because they are pretty. If a girl asks a male friend for dating advice, she knows that it is liable to be skewed by his attraction to her; and her girlfriends can sometimes be too nice, or even jealous. The tone of the blog was never something premeditated; it is just the way I think and write. But I understand why it is appreciated.

I do get a lot of readers telling me that they are initially shocked or turned-off by the blog; but they say that they were intrigued. So they continued… and continued… until finally they realized that they agreed – at least with most things. And this is good, because it is exactly the type of reaction you expect when you are giving advice that is somewhat counter-cultural, yet true. Of course, I have to assume that some readers never get passed the “shocked” phase; I just never hear from them because they close their browser and move on. But that is expected also. Not everyone has an attention span and an open mind.

Ultimately, I understand that my readers appreciate my blog because they can trust it. They’d rather read a blog that they disagree with occasionally but trust completely, than a book or website that is trying to sell them something – even if it sounds good every time.

3. Has that response changed at all over time? How so?

It hasn't really, no. The number of people giving feedback has increased dramatically, but the types of responses (and the relative percentages of each type) haven’t changed.

4. What have been some of your most popular topics/posts?

One of the most popular has definitely been The Importance of Silence After a Breakup. Even though I wrote it fairly recently, it has already accumulated the second highest amount of traffic, and has by far the highest number of comments, which are overwhelmingly positive. I am in the final stages of writing a book that expands considerably on this topic, and how to handle breaking up with a man in general.

The post with the highest number of hits is Men Don’t Fall In Love The Same Way Women Do. The comments aren't all positive, but it has the largest number of and +1s on Google by far. I suspect its popularity is partially driven by the number of girls searching the internet for “how men fall in love,” (which is the number one search term leading to my blog) and the absolute absence of other material trying to explain it. I am in the process of writing a better post on the same topic at the moment.

A few others that have been very popular are:
What Men Think of You Without Makeup (this gets shared a lot on beauty forums)
What Men Think About Older Women (fairly controversial, as judged by the comments)
Texting Tip 3 – When You Should Reply (for obvious reasons)

Some of my best posts are the newer ones, which dig a little deeper:
The Importance of Personal Boundaries
On Being a “Typical” Girl
Femininity, Authenticity and Compatibility

5. Your blog tagline says that, in your experience, women understand very little about men and the male mindset. Why do you think this is?

Well, for starters, it definitely isn't just women who are confused about the male mindset; men are equally confused about the female mindset – I just happen to write for women. There is a notion floating around that it has “always been this way,” but I absolutely disagree. A hundred years ago in Western societies, men knew what women wanted and women knew what men wanted. Even if they weren't happy with the rules of the game, and even if the rules were wrong, everyone knew them and played by them. But all that has recently changed, because we've rejected the old script. We live in a hugely tumultuous time for male-female relations. Men and women are “equal” now, but no one knows what to do anymore to attract the opposite sex. In the absence of any authority telling us how to behave, both sexes hear the word “equal,” shrug their shoulders in confusion, and assume that it means “the same.” We conclude that men want from women the same things that women want from men, and we act accordingly. But it isn't true. Social evolution (let alone biological evolution, which I think plays a part) doesn't occur that quickly. Both sexes still want significantly different things, but no one is telling us this anymore. And even though there is some overlap in our desires, this actually makes things more confusing, because it just serves to further mask the differences. Both sexes are currently standing in the rubble of a social battlefield, each trying to give the other what it doesn't want – mainly because we just don’t know any better.

6. In your opinion, what are the main differences in how men and women give each other dating advice?

That is a great question, because there are enormous differences. One of the largest symptoms of this difference, as I explained before, is actually one of the reasons that I started The Rules Revisited, and that is the complete lack of dating advice available for women on the internet – or in the media in general, for that matter. In the last 15 years, men have generated thousands upon thousands of books, blogs, websites, videos, businesses, etc. – each picking apart a different aspect of attracting women: overcoming approach anxiety, being authentic in a woman’s presence, mastering one-night stands, attracting women online, and so on. The sheer volume is impressive, and actually a huge testament to how much the male world revolves around the pursuit of women. But when you search for similar books or websites for women, you find very few – and many of them are actually written by men.

In my experience, women tend to seek dating advice mostly from friends. For example, my female acquaintances often ask me for dating advice; and I know that girls discuss it amongst themselves all the time. They love discussing it. They love telling their friends about what “he” said or did, gauging their friends’ reactions, and comparing related stories. Such a discussion is an event, to be enjoyed in-and-of-itself, whereas for men it is brief and purely practical – if it occurs at all.

There obviously are some women turning to the internet for dating advice, otherwise The Rules Revisited wouldn't have an audience. Probably this number is increasing, as people in general become more familiar with the power of the internet, realizing what lies at their fingertips. But there is no question that women lag men significantly in their use of written and internet-based dating advice.

7. Why do you think men and women approach dating advice so differently?

The sexes approach dating advice differently because the sexes think differently. The male mind is more inclined towards the kind of obsessive focus one needs in order to scrutinize even the tiniest of social interactions and break it down into usable rules. This is what we know how to do best, so this is the kind of advice we know how to follow.

Women are much more interactive, social and emotional thinkers. So they do what they do best: they bounce ideas or situations off of a number of different friends before drawing any conclusions. They feel their way through their questions, focusing on their gut instincts more. I also suspect that they are much more in tune with their friends’ and family’s emotional reaction to their dating situation, which is something that many men would never even consider.

I think it is important to point out that both approaches have certain strengths, but also certain flaws. The masculine ability to analyze is impressive, but men can get too easily trapped in a single problem, losing sight of the forest for the trees. For example, a man might perfect his online dating profile to the point that he has cute girls messaging him daily, or learn exactly how to react when his girlfriend tests his honesty or courage, only to realize – years later – that he still doesn't know how to keep a girl interested for more than three months.

The female strategy, on the other hand, gives women this incredible ability to capture the big picture and keep all of the various aspects of a relationship in the proper perspective; but I think women sometimes lack the depth of insight into specific problems that is sometimes needed to fix what’s wrong. So a girl might have 17 discussions with various friends about her dating life – and learn valuable things in the process – but never pinpoint that it is her short hair that’s turning men off, or her living situation that is preventing her from meeting new guys.

8.  Do you read other dating/relationship blogs? If so, which ones?