Andrew
September 10, 2011
The Rules Revisited
I wrote a similar post about not initiating contact after a guy breaks up with you. This is somewhat related, but deals instead with the beginning of a relationship. The underlying principles, however, are the same...

Women are forever trying to figure out a man's intentions by reading between the lines of texts, interpreting things he said, or things he didn't. This is usually too difficult to warrant the effort it takes, but it is entirely the wrong approach for another reason: there are all kinds of men that are willing and able to lie their way into a woman's pants - yes, even yours. If you find yourself having difficulty determining a man's level of interest because "first he said X, but then he said Y," or even if you know exactly what he is saying and are sure he is interested, stop yourself. What a man says is the worst possible indicator of his interest: you need to pay attention to what he does.

This is why it is so important for a woman to allow a man to initiate contact after an initial meeting, and even well into the relationship. I've heard a number of girls actually complain about this, apparently preferring a situation in which they wouldn't be stigmatized for chasing men, or even for taking the initiative in "small things" like the first phone call or date. (These complaints always come from women who don't get enough attention from men. If you fall into this category, I suggest you read the other posts.)

If men didn't try to sleep with lots of women with no strings attached, or if women didn't want stable relationships, then it is conceivable that women could approach men. But given the undeniable preferences of the two sexes, the situation couldn't be other than what it is. Women, who, on the whole, are more interested in stable relationships, necessarily assume a defensive position against men, who (again, on the whole) are more interested in casual sex than women.

A woman's "game" can be broken down into the following three parts:
While there is a lot to learn about the first part of female game (optimizing attractiveness), there is just as much to learn about the latter part (filtering). Filtering is necessary because the men that a woman wants to date are a subset of the men that want to have sex with her, and by making herself more attractive to potential boyfriends she also is making herself more attractive to all men. Because I needed to practice my skills in PowerPoint, I've illustrated this with a Venn diagram: 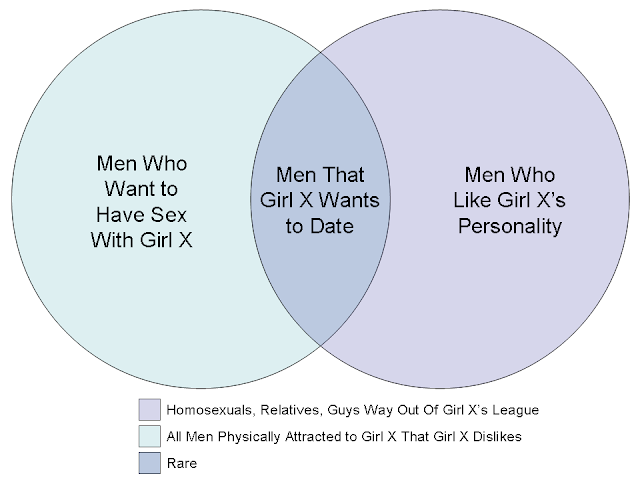 As most girls probably know, it can be difficult to determine which men fall into which category. And as I mentioned at the beginning of this post, if you are only paying attention to what a man says, it can be impossible. A girl interested in saving her time and emotional energy needs to be as adept as possible at discerning these these types of men. And this is why it is so important for a woman not to initiate contact with a man. When you initiate contact with a man before you know his intentions, you are denying yourself the least equivocal and therefore most important indication of his interest. I will go as far as to say that you are denying yourself the only reliable indication of his interest.

I could give all kinds of examples, but you get the point. By making it easy for a man, you risk wasting your time and energy on someone who is only interested in having sex with you, or maybe worse, someone who will actually agree to a relationship or even marriage, only to change his mind months or years later when he realizes he wants someone he considers better. Taking the initiative is not a right that men have over women; it is (or should be) a hurdle that women place in front of men to make them prove their interest.

Disclaimer: A man will jump over a lot of hurdles to sleep with a woman that is hotter than himself, or at least, hotter than the other girls he's slept with. The more attractive you are relative to him, the more cautious you need to be. This is complicated by the fact that it is perfectly possible for a man that is less attractive than a girl to be sexually attracted to her and interested in her as a person (i.e. not overwhelmed by her beauty so much that he doesn't consider her personality). There is a danger of losing a guy like this by putting up too many hurdles and discouraging him. My suggestion: don't play below your league.

-------------------------------------
If you liked this post, you'll definitely like my book, Beyond the Breakup, which explains everything you need to know about dealing with you ex: what he's thinking, what is motivating him to stay friends with you, how to maximize your chances of getting him back - and if that doesn't happen, how to focus on your future.


Related Posts
1. Cut Him Off
2. Don't Try to Be One of The Guys
3. You Are Responsible for Your Own Romantic Happiness
Previous Next