Don't Let a Guy Waste Your Most Eligible Years

Andrew
January 27, 2012
The Rules Revisited
If you are interested in getting married, you need to be well aware of the fact that you are probably most attractive sometime in your mid- to late-twenties. This means that your mid- to late-twenties are the years in which you are most likely to attract the highest quality man you can get. And while I've written a fair amount about maximizing your attractiveness, it all counts for nothing if you aren't single when the right guy comes along, or if you aren't putting yourself out there because you are involved with someone who is only half-committed to you. So in addition to looking your best, you need to make sure you aren't spending time in dead-end relationships. 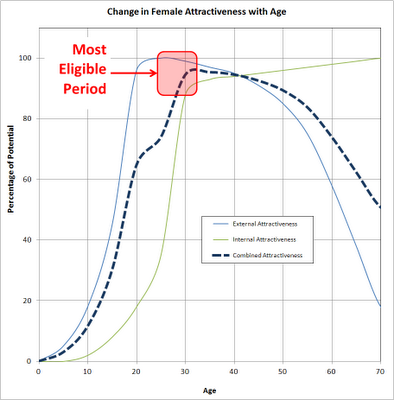 Time and time again I see or hear about girls who allow a guy to date them for three or four years in their twenties without proposing. This blows my mind. I understand that these girls are holding out in the hope of eventually getting a proposal, but they don't give enough consideration to the possibility that they'll be strung along for another two or three years, only to have him decide that he wants someone else - or worse yet, someone younger. Combine this with a girl's reduced odds of finding someone (let alone someone better) once she begins to age and things begin to fall into perspective; it seems crazy to consider dating someone for more than a year without a very strong confidence about the direction in which the relationship is heading.

If the same graph showed the value of a house you owned over time, there is no way in hell you'd be renting it out for long periods of time between 20 and 30 years, when it's value is highest. You would either leave it vacant during that time for prospective buyers, or at most, only agree to month-to-month leases so that it would be available to sell when a buyer came along with a good price. You'd also be actively advertising the property, because you'd want to take advantage of its high value. I'll let you draw the analogy.

Don't give a guy your most eligible years with nothing to show for it. This is bullshit. If you ultimately want to get married and your current relationship isn't constantly growing stronger (i.e. approaching something permanent), then you need to start asking questions. And if you aren't getting satisfactory answers, it is time to look elsewhere. The clock is ticking.

Furthermore, your time is your responsibility - not his. For better or worse, men will not make commitments that aren't required of them. If he isn't taking things to the next level when you think it is appropriate, break up with him. You can do this nicely, and you should explain your reasoning clearly, but you should still break up with him. More easily said than done? Probably. But it is the best move nonetheless. If he really wants you, he will try to get you back; but if he doesn't, remember: during your most eligible years, you are better off being back on the market than tied up in a dead-end relationship.
Previous Next