Guy 1: “Man, check out that girl in the yoga pants [or any tight article of clothing] over there.”
Guy 2: “Damn, she is hot. I love when girls wear yoga pants.”
Guy 1: “Yeah, me too… except fat girls, that is just disgusting.”
Guy 2: “Haha well yeah, not fat girls. That is just gross. They shouldn't be allowed to wear stuff like that.”

I know a lot of readers will initially disagree – men included. There was a time when I disagreed myself. In fact, I used to participate in the very kinds of conversation I am criticizing. But eventually I started paying attention to fat women rather than just dismissing them, and in doing so I realized that what we were saying wasn't true at all. What happened was that, on a few occasions when out with female friends or acquaintances, they started criticizing heavy-set girls for wearing tight clothes. They said things like “She shouldn't be wearing that, look at her stomach!” or "That girl needs to go home and lose 20 lbs before getting in a swimsuit like that!" But when I looked at the same girls they were criticizing, I found myself attracted to them, precisely because of their tight clothes. I had enough imagination to recognize that the very same girls in loose clothes would do absolutely nothing for me; but in a tight dress or yoga pants, I was checking them out.

Look, here is the thing: the female figure has evolved to be attractive to men, and it shines most when its natural curves can be seen. This holds true even when those natural curves are covered in fat; which makes sense, because (except in severe cases of obesity), the woman's proportions still exist. Loose clothes only serve to mask a woman’s figure. When a fat woman wears loose clothes, it makes her look like a mass of floating fabric. You not only still know that she is fat, but you also forget that she is a woman. True, a tight dress might show that a woman has a gut, but loose clothes don't hide it - they just hide her femininity.

Granted, there is probably a way in which an overweight woman can choose clothes very carefully in order to play down her weight while playing up her curves; but these clothes won't necessarily be loose. Anyway it is somewhat beside the point, which is that, on the whole, tight clothes still make fat women hotter, even if they don’t make fat women hot. You might be able to argue that fat women gain less attractiveness than fit women by wearing tight clothes - great, no problem; I am just saying that they don't lose it.

It's been too long since I illustrated anything on here, so let's do so with a plot: 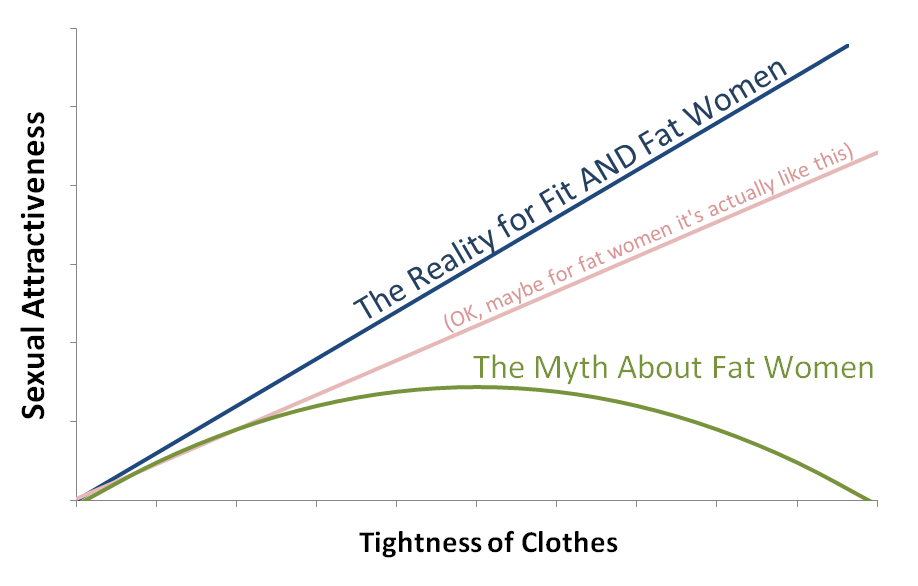 If you still aren't convinced, it might be worth pointing out that the mistake I am accusing people of making is actually a very common one in human reasoning. It’s easy to think that something is a certain way (i.e. unattractive) because of something rather than in spite of something. In other words, it is very easy to believe that a fat woman is unattractive because of her tight clothes, when the reality is that she is unattractive in spite of the tight clothes. The tight clothes make a woman's BMI a little more evident, so people are more prone to make this logical leap; but that doesn't mean they are right in doing so.

Conversations like the one above happen because men like to indulge in the idea that fat women are unattractive. It makes them feel better about their own sexual attractiveness to look down on someone else’s. If they have to slip through a logical loophole in order to do so, they aren't going to lose sleep over it. And the girls who mock fat girls for wearing tight clothes usually just aren't secure enough with their own bodies to wear something that tight. They aren't mad at what you are wearing, they are mad because it reminds them of their own insecurities. Of course, it is easier to mock the fat-but-confident girl than it is to face up to your own body issues, so that is exactly what they do.

Anyway, fat and overweight ladies: don’t be shy about wearing tight stuff to the gym, bikinis on the beach or tight dresses to the club. You can ignore the guys and girls that claim you should cover up, because their complaints say a lot more about their self-confidence (or lack thereof) than anything about how you look in spandex. And yoga pants might not make you look like a supermodel, or even thin, but they still turn guys on more than your baggy jeans.

Related Posts
1. What Men Think About Your Weight
2. Feminine Beauty is Highly Controllable
3. "Because Of" versus "In Spite Of"
4. There Is Nothing Modest About Loose Jeans