How "Hard to Get" Should You Play?

Andrew
November 27, 2013
The Rules Revisited
Every woman has been advised at one time or another that she can increase her attractiveness to a man by showing him less interest, that is, by playing "hard to get." Most people don't disagree with this advice, at least not completely; they understand that there is a psychological mechanism by which people tend to want what they can't have. But there is plenty of disagreement about the degree to which this tactic should be applied. A lot of girls obsess over how to strike a balance between "too easy" and "too hard to get." They analyze text messages, scrutinize their response times, stress out about when is the right time to sleep with a guy, or wonder if they will lose their chance with a guy off by not making a move themselves.

The reality is that there isn't any strict rule about how "hard to get" you need to play. Or rather, it varies for each girl and in each situation. Some girls need to apply it more than others. There are girls that immediately cling to any interested guy that meets their minimum requirements, and these girls could benefit quite a bit by showing some self-restraint. On the other end of the spectrum, there are girls with colder dispositions that would dissuade even the most persistent men by playing any harder-to-get than they already do. How hard-to-get you should play also depends on the guy in each situation. More persistent men will push through a higher amount of resistance, while those with a lot of options or lower degree of interest in a girl will be more easily deterred. You could drive yourself crazy trying to figure out where exactly along each spectrum you and he lie, and how to calibrate your behavior accordingly.

The good news, and the main point I want to make here, is that you really shouldn't over-think this. If a guy is interested in you, there is a wide margin between the behaviors that will make him think of you as "needy" and "uninterested." It will be incredibly difficult to change his interest in you by small things like agreeing too readily to a date, or being too enthusiastic in your texts. As long as you are agreeing to go out with him and not acting bored when you spend time together, you are showing more than enough interest to avoid discouraging the average guy. And as long as you aren't asking him out all the time, or initiating contact with him regularly, you aren't going to appear needy enough to turn him off.

Now, if a guy isn't that interested in you, the thresholds for "needy" and "uninterested" will be closer together, and smaller "mistakes" might cause him to change his mind about you. The girls that obsess over their behavior or the content of their text messages are usually dealing with a guy like this. In fact, his nonchalance about the relationship is usually what drives this hyper-awareness in the first place. The mistake these girls make is to think that their behavior that is responsible for the guy's decision to stop seeing them. While this is true in the limited sense that their behavior triggers the guy's decision, the reality is that his lack of interest was making it next to impossible not to trigger that decision.

Think about it this way: if a guy can be turned off just because you use the wrong adjective in a text, or sleep with him a couple dates too late or soon, or do some other small thing "wrong," then there isn't enough attraction there to sustain a relationship anyway. It was a losing battle from the outset. If the guy doesn't like you enough that you can behave naturally, then he doesn't like you enough for a relationship to last. There is no way you can perpetually guard every word and action around him, or control every emotional impulse forever; at some point you need to be able to relax and be yourself, and he needs to like what he sees when you do so. If you are in a situation where you are stressing out about what to do or say around a guy, your problem isn't your inability to know how to act, or your inability to calibrate your behavior, it is your inability to be comfortable with rejection.

This phenomenon can be illustrated with a simple plot, as shown below. The whole point is that it isn't worth spending your time in a dating situation that falls to the left of the dotted line. If you do, there won't be enough leeway between "needy" and "uninterested" behavior to allow you to be yourself in the relationship. In order to avoid the (red or blue) "no date" zones, you'll have to be constantly guarding your behavior in the same obsessed way that you are right now, as you attempt to get into or hold on to the relationship that is causing you so much stress. Where exactly the dotted line falls is something you need to decide for yourself; but you need to recognize that a limit exists. Until you do, you are going to give yourself a lot of grey hairs - and have nothing to show for it in the end. 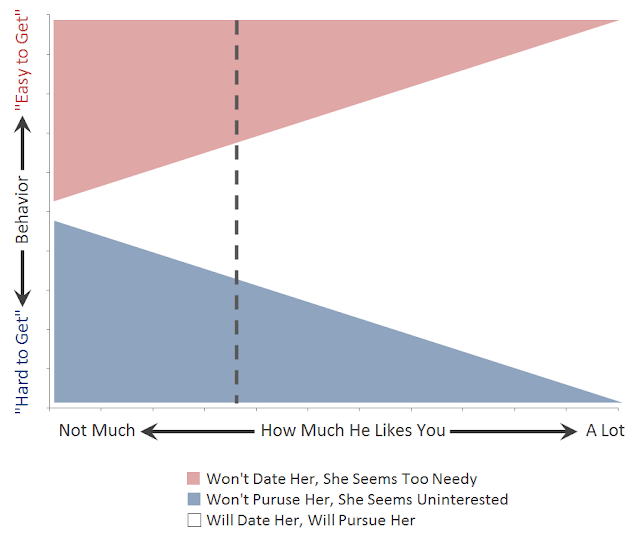 Incidentally, guys make the same mistake all the time in their attempt to attract girls. It is particularly evident when you watch guys trying to figure out how to approach and pick girls up. If you could see how obsessively men try to figure out the right thing to say to a girl, or the best way (or time) to approach her, you would know exactly what I mean.* Men are constantly over-analyzing these things. What many men don't realize, is that if they need to force their behavior into a tiny, perfect mold in order to attract a girl, then they aren't going to be able to hold onto her for very long. The act can't be maintained forever; eventually they will need to relax and behave naturally, at which point the tailored personality that attracted her will disappear, and so will she.

In light of all of this, the goal - for men and women - should be to work at self-improvement slowly and steadily - in the long-term, but to relax and be themselves with the opposite sex in the moment. So if you are finding yourself constantly calculating your next "move" in a relationship, or watching your words too much, recognize that you are probably fighting a losing battle. Take a deep breath, relax, and focus instead on making yourself vulnerable to the possibility of rejection. Remember, sometimes it is a good thing.

______________________________________
* In fact, you can see this if you just do a Google search for "pick up artist" or "approach anxiety" and read the uncountable number of websites, blogs and books that have been written in an effort to perfect these things. In fact, I am convinced that men freak out about this stuff way more than women do. Perhaps this is because the pressure is on us to make the first move, but the obsession is still there.