How To Look Good During Sex

Andrew
January 9, 2012
The Rules Revisited
It has often been said that women are turned on by what they feel, while men are turned on by what they see. There is a lot of truth to this. Of course it may not be so black-and-white; probably men are aroused by what they see only in proportion to how masculine they are, and women by what they feel in proportion to their femininity. But whatever the case, men are primarily aroused by what they see. While certain moves, positions or behaviors also play a role in arousing a man during sex, visual stimulation is the most important yet most frequently overlooked aspect of a woman's sexual performance. In addition to making yourself as attractive as possible by using non-bedroom techniques such as working out, doing your hair, etc. the following list of things should help to catch his eye. I've been careful not to list things that some guys like and others don't - this list should only be the things that apply to the vast majority of men.

1. Leave the lights on, at least enough so that he can see the form of your body, your hair, etc. Without light, nothing else on this list will be as effective. Dimmed is probably better than leaving them full-on, but darkness is not sexy at all to a man.

2. Arch your back. This is the single most potent bedroom posture a woman can assume. Most women do this naturally during heightened sexual pleasure, and he becomes more aroused by seeing you aroused. Do it regardless of being face down, face up, or on your side.

3. Point your feet down as if you were standing in high heels. I haven't figured out why this is sexy yet, but rest assured: it is. Do this when you are lying on your back with your feet in the air, crawling across the bed, or in any other situation in which your feet are free. Consider leaving your heels on during sex, as it assists and heightens effect.

4. Throw your head back. This is also done naturally during heightened sexual pleasure. Combine with #2 and #3. Also try turning your head to the side, as if the pleasure is too intense to look directly at him. In addition to demonstrating your pleasure, both of these actions slightly contort and accentuate the neck, one of the most delicate and feminine parts of a woman's body. Close your eyes or it will seem unnatural.

5. Wear matching underwear. This makes you more comparable to the supermodels he fantasizes about routinely, and generally looks a lot better on you (models do it for a reason). Simple colors and types of underwear are perfectly acceptable. Also, let him initiate the removal of your underwear. I am usually disappointed when a woman takes hers off too soon. It looks sexy and I don't get to see it very often, so I want to enjoy it for a minute before I rip it off.

7. Put your arms above your head. This widens the upper portion of your body, accentuating the relatively small width of your waist and bringing out your curves. A small hip-to-waist ratio is extremely sexy to men, and by doing this you give yourself more of an hourglass shape. This is also an open posture - one which uncovers and "opens" the vulnerable front of your body, indicating your gift of yourself to him, and therefore your trust and love. This openness establishes a much deeper connection, which has all kinds of benefits, but is also sexual. The picture below (on top) illustrates the accentuation of the waist, while the photo below (on the bottom) shows a more natural instance of the posture. (Also see the right-most picture under #2.) 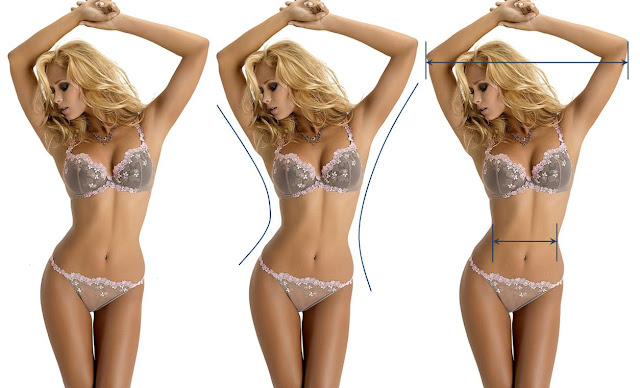 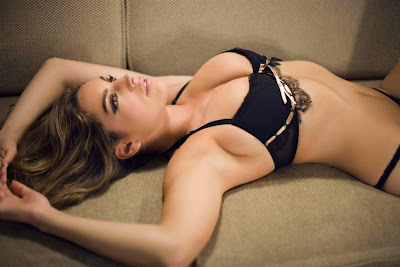 8. Make your movements slow, sexy and constant. The general idea is that you are slowly but continually moving in rhythm with and response to his sexual lead - in a sense, "flowing." The movement is something like squirming, but in a slower, more sensual (rather than uncomfortable) way. He will be turned on by watching you respond to the pleasure he is creating in you. The video linked in the postscript illustrates this best.

In some instances, the things above will feel strange and require a little acting on your part; but over time they will become your natural response to pleasure. In addition, it is likely to be self-fulfilling acting, since by doing so you will arouse him, and his resulting lust for you will ultimately arouse you more. If these things aren't natural for you, I suggest that you try to implement only one at a time, otherwise you will likely disengage from the sex itself by focusing too much about your body. It shouldn't be too forced.
Previous Next