Should You Focus on Your Looks or Personality More?

Andrew
March 29, 2012
The Rules Revisited
My audience on this blog is not uniform by any means:

The advice that I give is similarly varied. Depending which of these groups (and others) you fall into, different pieces of advice (from this blog or other sources) may or may not apply to you. A girl who already knows how to dress well and look her best should not be scrutinizing every aspect of her appearance, even if I post about it frequently. Those posts are not intended for her. If a girl like this gets rejected it would be an exercise in futility for her to fret about the fact that she wore one top instead of another, or wore heels instead of flats, or put on too much make-up, when the real problem is that she is boring, or is always trying to identify with men, or is a slob. Perfecting some single part of her look is not going to have anywhere near as much of an effect as trying to improve her personality.


The fact of the matter is that improvements in appearance follow a law of diminishing returns. Added efforts produce less and less results. And there comes a point at which it makes more sense to shift focus to the areas of your life that will have a larger effect: 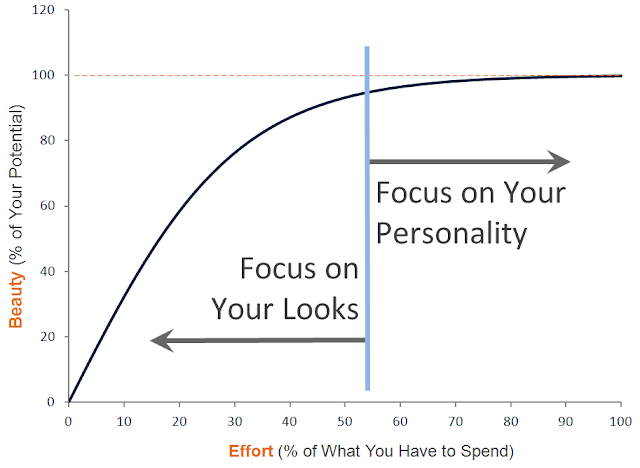 The phenomenon doesn't only apply to appearance. In a similar manner, a girl who has a good personality - who is radiant, fun to be around, nurturing, intelligent, cheerful - a girl like this would be stupid to spend her time harping on the fact that she sometimes feels a little awkward in social situations, or lamenting her less-than-impressive intelligence. Instead, this girl should focus more about her appearance (which was probably neglected while she was becoming an awesome person). In doing so she might realize that her clothes often clash with her complexion, or that her hair doesn't suit her face shape, or that heels make her look sexy - all of which would be far more effective in making her more attractive to men than making some minute improvement to her personality. 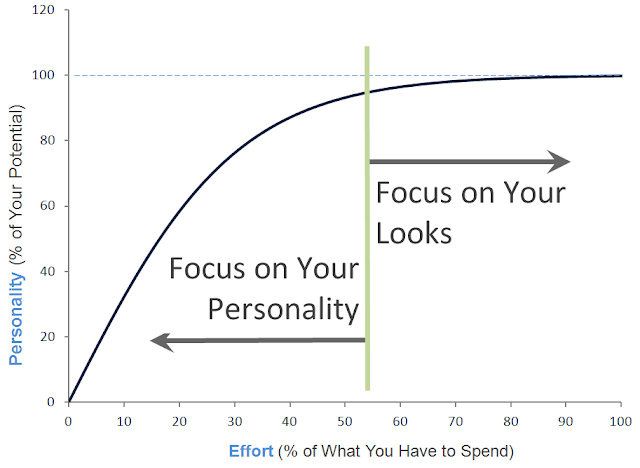 Many women will lie somewhere between the states represented by the two plots, depending on how they have invested their time and effort. But when you read advice from this blog - or elsewhere - first understand what type of girl you are and where on each plot you lie before you decide whether or not it applies to you, or to what degree.
(By the way, the 50-odd % location of the dividing line in the charts above is fairly arbitrary, and the shape of the curve will probably be different for every girl anyway. Don't pay much attention to it.)
Previous Next