Andrew
November 26, 2012
The Rules Revisited
A lot of people use laughter in their texts to convey that they are just kidding, or only semi-serious, or just to be light-hearted. By laughter I mean "haha" or hahaha," rather than "lol." 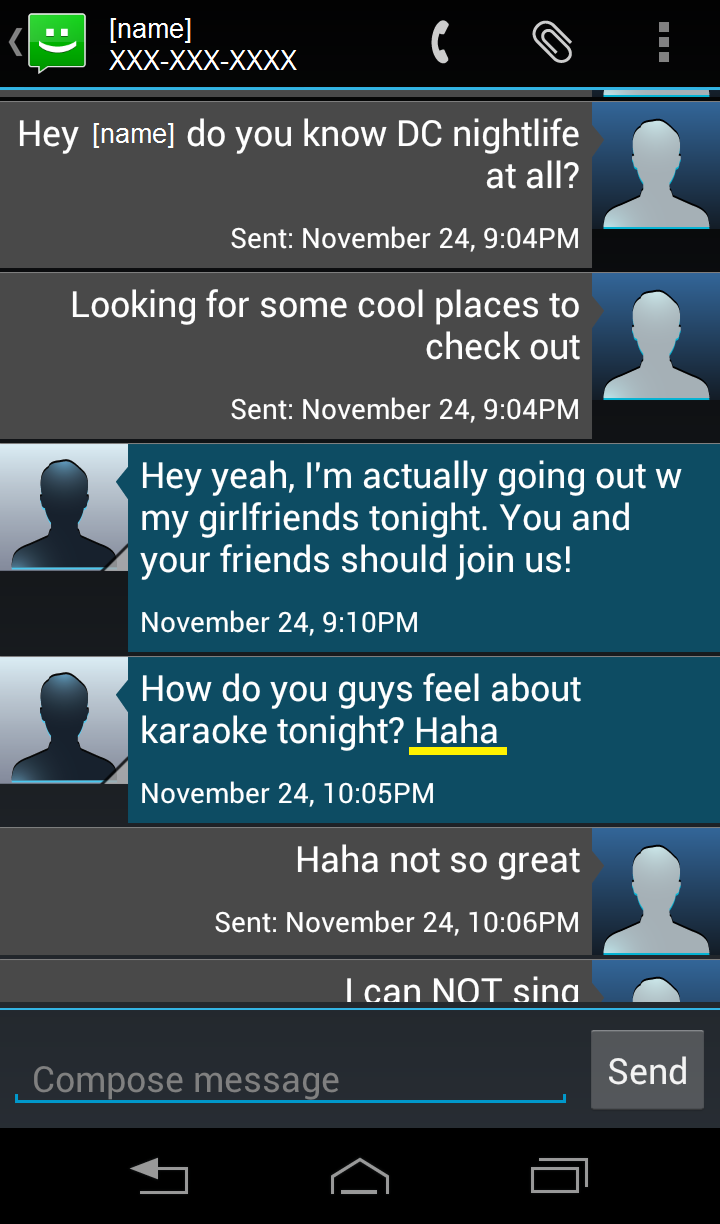 Consider the text conversation in the screenshot from my phone on the right. Specifically, consider the girl's second text, "How do you guys feel about karaoke tonight? Haha"

The placement of the "haha" at the end of the text betrays insecurity. It makes the laughter sound like it was an after-thought, pinned on at the end to soften the text's meaning - because it was. In this instance, the girl wanted to invite me and my friends out, but was unsure about whether I would like her suggestion - hence the awkward laugh after her question. (It is worth noting that the karaoke suggestion text arrived about an hour after the one suggesting that we join them.)

In normal speech we laugh as an idea forms in our mind, and then we verbalize it - often while still laughing; but we almost never say something and laugh afterwards (one exception to this is when we tell a joke with a punch line). So the "haha" at the end of a text sounds forced and awkward, and therefore insecure. It is the text-equivalent of a person saying something sarcastically when they actually mean exactly what they are saying, but don't have the balls to say it to you straight.

Imagine if the same text, in the same conversation, were instead written with the laughter at the start:

"Haha how do you guys feel about karaoke tonight?"

Suddenly the laughter sounds genuine and the insecurity is gone. The text changes from connoting "I hope you will like the idea of karaoke but I am worried that you won't so I'm going to pretend it's only semi-serious" to "Here is a ridiculous but fun idea: let's go do karaoke tonight. Are you in?"

So this tip is simple: never place laughter at the end of a text, and certainly don't follow up a text with another that just says "haha" (this has the same bad effect but to a greater degree).

Sticking to this rule can help you save face when you are texting men. More importantly, it will force you to acknowledge and correct your insecurity each time you feel it: the act of fixing the laughter in your text will force you to internalize the more confident stance it conveys, and this confidence will gradually become a habit.


Related Posts
1. other Texting Tips (coming soon)
2. How to Improve Your Posture - Part 2
3. Learn How to Be Social
Previous Next