Yet all of us have seen instances that disagree with these stereotypes in varying degrees. I’ve met a few women that could easily kick my ass and plenty that can beat me in sports; we’ve all encountered incredibly effeminate men, or women who are domineering and independent.

If you plotted each man or woman’s “rank” with respect to a given character trait on a linear scale, you would see a large amount of dispersion or “scatter” in the data. For example, a plot on the intuition scale might look something like this (each point represents a single man or woman): 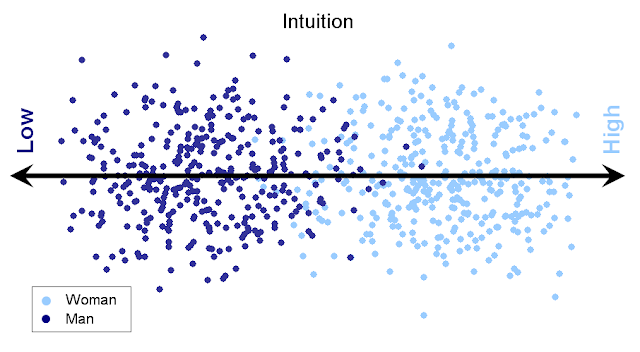 Similar plots could be made for all kinds of characteristics:
On this blog I make a lot of statements about men and women, about masculinity and femininity, and about the effects of these dispositions on male-female relationships. Understanding these differences is important – critical, even – in learning how to dispose oneself towards the opposite sex. But it is equally important to keep in mind that these differences are only the differences between the averages. Not all men and women will conform to these stereotypes, and it would be a mistake to insist that because some do not, they are not “real men” or “real women,” or to ignore them in your attempts to attract the opposite sex. Be aware of this while reading this blog and others.

For example, I might make a statement like "Men desire sex more than women," and this is perfectly true when you look at the average man and the average woman. But it is just as important to recognize that you may encounter men that are less sexually driven than most women you know, or women who are hornier than any guy you’ve ever met. More importantly, you may not conform to the female stereotype yourself, which would probably mean that you would benefit from looking for a guy who doesn’t conform to the male stereotype (in that respect) either.

The following plot illustrates how a random group of men or women might fall on a masculine-feminine scale – which can be thought of as the combination of a large number of character traits. 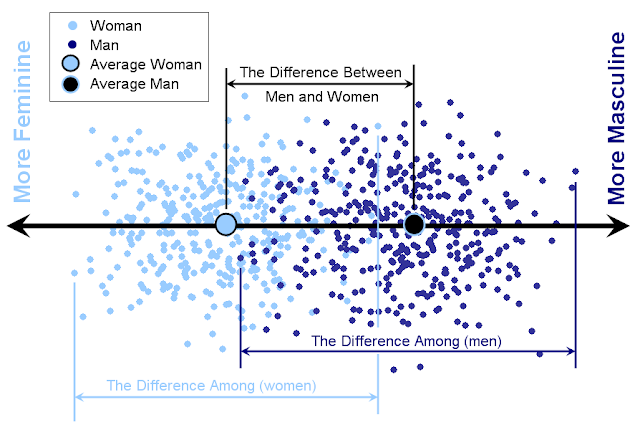 (a) By only paying attention to the stereotypical male, you might miss out on a type of guy that is more appropriate for you than the stereotype – a better match.

(b) In the course of trying try too hard to conform to the stereotype of femininity, you could deny your naturalinclinations. Although your natural self may not attract as many men as your stereotyped self, it may attract more of the kind of men you are interested in. (Though be careful not to confuse your natural inclinations with social pressure – for example, the pressure to succeed in your job.)

So while you are thinking about or reading about the differences between the sexes, remember that, in most respects, the difference among is greater than the difference between; and this in turn means that the guy best for you or most attractive to you may be somewhere closer to the limits of the “scatter” rather than the average when it comes to a particular personality or physical trait.