The Importance of Taking Fashion Risks

In response to our instinct for self-preservation, we, as humans, cling to what is safe. Even when we recognize the benefits that can be afforded by a departure from our normal course of action, we find ourselves bound to what is familiar. In restaurants we only order foods we grew up eating so that we don't have an unpleasant meal or have indigestion - even though we might be missing out on the most incredible, exotic foods. We practice the accepted politics in our state because it feels good to agree with everyone, even if our mind and experiences tell us that the truth is otherwise. We stay on the marked trails when we hike up a mountain so that we don't tread on loose rocks and sprain our ankles, even though there is a stunning view to be found just behind the rock outcropping in the distance.

To a certain extent, this inclination is a good thing. By following established paths in life we avoid making serious mistakes, and circumvent discomfort or personal harm. However, the instinct is an excessive one; it affects us more than we actually need in order to stay safe. The instinct for self-preservation essentially tells us to avoid doing anything dramatic, because it recognizes that dramatic action can lead to personal endangerment - whether it be physical, financial, social, moral, intellectual or otherwise. But dramatic action is also necessary for greatness, it is a prerequisite for unique success. Unless we stray from the normal path, we wallow in mediocrity.

So the instinct for avoiding dramatic action, although it is self-preserving, also happens to be self-limiting. Although I might have job security at my family business running the local shoe store, I won't be able to pursue the chance of becoming a world-renowned architect unless I break away from what is safe. A woman might know for a fact that her current, mediocre boyfriend will marry her and provide for her if she stays with him, but only by taking a risk and breaking up with him does she enable herself to meet someone she feels a real connection with. Even though a man might face embarrassment and rejection by approaching a beautiful woman, he won't ever meet someone so attractive if he doesn't risk being turned down.

We've all read or heard the famous quotes about the importance of risk-taking, and we all understand that it is important factor in personal success. But we normally limit our consideration of this phenomenon to ostensibly "big" things, like moving to a new country, taking on a huge and uncertain project, or speaking in front of hundreds of people. It isn't the kind of thing you usually think of in relation to something as simple as fashion or style, but it applies just as much - if not more so, in the sense that your personal style is something that you have to make decisions about on a daily basis, and constantly communicates all kinds of things about yourself to others.

Over the holidays, my little brother asked me if he could borrow a pair of pants to wear out, since his were all in the laundry. I suggested he could wear a pair of gray chinos I'd just bought, since they worked well with the shirt he wanted to wear. 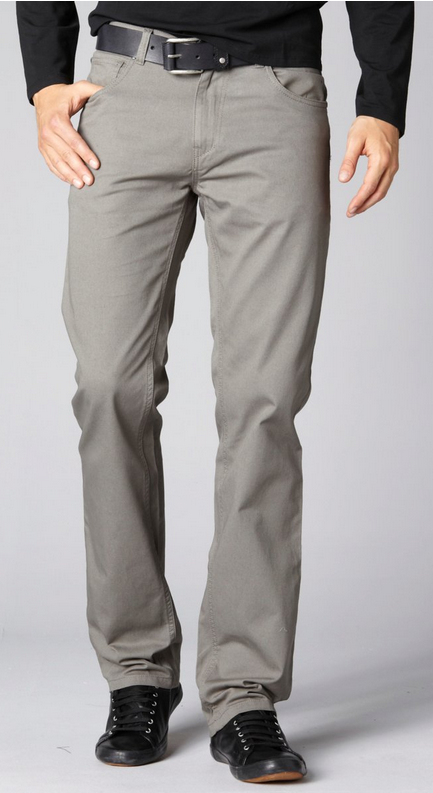 "Gray chinos?" he asked. "That's weird, I've never worn something like that before..."

I knew exactly what was going through his head. I'd been there a hundred times before, especially five or six years ago when I first decided to learn how to dress better. I knew how to convince him, but I also knew I needed to start with the facts, with the practical reasoning.

"I know you haven't," I told him, "but they'd fit you perfectly and they will go well with the other stuff you're wearing. See? The gray is warm, just like the colors in your shirt, and you can wear these shoes with them too; it'd look sharp."

It really was a perfect look for him. Granted, it was a departure from the jeans and t-shirt he normally wore at college parties. It was a little more formal and more mature looking, but I knew it would look great on him. Unsurprisingly, he was still hesitant, so I cut to the heart of the matter:

"Trust me on this one. You are going to feel weird as shit for the first couple hours, but eventually that will wear off. An hour after we get to the bar, you won't even remember that you are wearing them. Then tomorrow you'll see photos on Facebook from the night, and you'll realize that they actually looked damn good on you. Next time you won't think twice about throwing them on - in fact you'll probably look forward to it. You just need to soak in the initial awkwardness until it passes. Until then, you can't judge the way they look on you objectively. In the meantime, take my word for it. I know you respect my dress sense."

I must have been convincing because he took my advice. He looked awesome, as was evidenced by the fact that he got hit on twice that night by older women (this is a lot for a guy, by the way).

Everyone with an once of pride knows the feeling that went through my brother's head. The social risk of wearing something outside your comfort zone can be intimidating. You feel like everyone is noticing your clothes or shoes or hair, but you are uncertain of what they think. You just don't feel "at home" in your own clothes. It's awkward as hell. It's the feeling that kept an old coworker of mine from buying a new pair of jeans, even though the ones he constantly wore were several years old and threadbare. It is the same feeling that kept me wearing sneakers in all casual and even semi-formal circumstances, long past an age at which it was appropriate. It is the feeling that you might experience when trying to change your look from cute to sexy, or when you consider wearing heels in everyday circumstances, or adding lace to your outfits, or dressing up for casual activities.

However it is manifested, what you are feeling in these situations is the inclination towards social self-preservation, towards the avoidance of social catastrophe. The instinct prevents you from fashion faux-pas and wardrobe-related embarrassments, but it also prevents you from learning how to dress and from looking your best. Next time you try to make an improvement to the way you look, make an effort to soak in the awkwardness of what you are attempting before ruling it out.


Related Posts
1. Sexy Versus Cute
2. One Way to Improve Your Look
3. How to Avoid Looking "Fake"
4. "Because Of" Versus "In Spite Of"