The More Confident He Is, The Less He Likes You

Andrew
December 23, 2011
The Rules Revisited
I recently had the following conversation with a friend of mine:

"Dude, that girl I really liked - remember, the one from the beach? She resurfaced the other day. She texted me out of the blue. She is going to be in town for the holidays."

"Really? The half-Italian girl? She was pretty hot if I remember correctly. That's cool, but be careful with it - I've had girls I was into resurface like that before, and it's tough. This time you have to have complete control of the situation - show no weakness."

"Yeah man, I know. It's just hard to do that. I am trying to keeping my expectations low this time. I know I need to act around her the way I act around girls that are way into me. It's just so much more easily said than done..."

"I hear ya man. That's the irony of it all. When I am really into a girl, I somehow fuck it up. When I don't care at all, they fall in love with me. It sucks."

I am sure most people can identify with the sentiment, because the same phenomenon happens among women. It is partially the result of what one amusingly accurate website calls "ladder theory," whereby both sexes are constantly trying to attract the best possible mate of the opposite sex. In other words, it is a by-product of the fact that most single people are constantly trying to play out of their league. So maybe the girl that resurfaced in my life recently is simply too good for me, and my attempts to attract her are futile, even if I play my cards right. 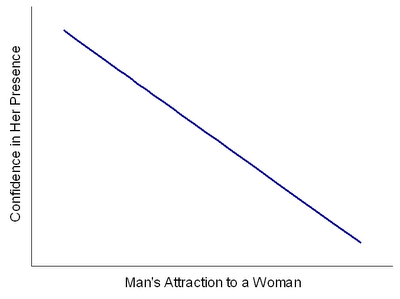 However, irrespective of a guy's true value, there is no denying that there is also a large element of control involved: guys can either play their cards right, or "fuck it up," and their ability to do one or the other is closely linked to their confidence. So, for example, even though I might actually be out of this girl's league, the fact that I think she is a ten will initially make it harder for me to demonstrate my true value to her, since I will be less confident in her presence.

I don't think this is news to most people. What I really want to point out is the implication for women:
If a guy is genuinely very confident around you, he probably doesn't feel a strong attraction to you. If he is nervous or awkward around you, he is probably very attracted to you. These are the extremes of a linear scale, so that you can conclude that his confidence is proportional to his indifference.

This seems obvious, particularly the second point. But time and time again I see girls get their hopes up about the fact that a really hot guy gives her attention, even though the quality of that same attention should actually be a warning sign that he isn't that into her. (And anyway, if he is the rare exception to the rule and really is genuinely confident, even around women he really likes, playing a little hard to get won't dissuade him from trying again.)

The best way to judge his confidence is by contrasting his behavior towards you with his behavior towards others, since he could be generally confident, or generally shy. You should also be wary of false confidence, which some men put on when they are interacting with a girl they think is out of their league. Most women can pick up on this intuitively, but it usually manifests itself as excessive cockiness or excessive teasing, and frequently can be read in his body language. Finally, try to judge his actions when he is sober, since alcohol changes the way he acts and usually boosts his confidence.

(Note that over time, he may become comfortable around you and his confidence may grow. This post applies mostly to initial interactions.)
Previous Next