The Problem with Denim and Leather

Andrew
September 1, 2015
The Rules Revisited
Several years ago, I got into a discussion about women's clothes with my girlfriend at the time and her friend. The friend mentioned that she had "kind of started to hate polo shirts on girls." I was a bit surprised, so I asked what was motivating her hatred. She replied that they were "just too masculine."

I found that interesting. I'd never even noticed polo shirts as being particularly attractive or unattractive, let alone masculine or feminine; but I could see where she was coming from. After all, some clothes (dresses for example) are more feminine, so it made sense that other types could be more masculine. From that point on, I started paying more attention to how sex-appropriate various types of clothes seemed.

Years later I started reading a website called Masculine Style, which does a great job of teaching men how to dress well. The author explains that the history and evolution of certain clothes is what makes them have the visual effect that they do, making them work (or not) for different men in different situations. 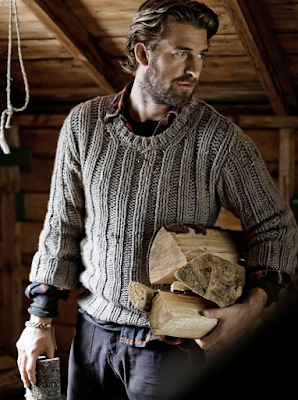 He explains, for example, that heavier knit sweaters are far more rugged and masculine-looking than a thin cashmere cardigan because they were designed for and traditionally used by dock workers and fishermen. Similarly, boat shoes were designed with soles that were soft enough to prevent scratching the decks of yachts, and therefore still hint at wealth and luxury in spite of their casualness. Sturdier materials like denim and leather have histories rooted in farming and manual labor, and so they carry connotations of their industrial origins – which brings me to my point…

For a couple years now, I've realized that I don't like when girls wear denim or leather. If the girl is good-looking, I will still be somewhat sexually attracted to her, but both the magnitude and type of attraction is significantly different than it would be if the same girl were dressed in lighter, softer materials. And following the train of thought that was inspired by my ex-girlfriend's friend and what I read on Masculine Style, I've started to wonder if my distaste is due to denim and leather being inherently unfeminine materials.

I mean think about it: denim and leather are rough, sturdy materials made to withstand the abuse of hard labor. They were made to protect rugged men doing rugged work. In the same way that we project onto guys who wear heavy-knit sweaters the masculinity of dock workers, it makes sense that we project onto women the connotations of wearing laborer's clothes – whether we do so consciously or unconsciously. And doing so casts a shadow over a woman's femininity. Asking a woman to look attractive in a biker jacket is kind of like asking a man to look attractive in lace.

Now, I realize that anytime you say (or even suggest) that something might be "objectively" masculine or feminine, people get defensive. If there is a scale along which masculinity or femininity can be quantified, people invariably start worrying about where along it they'll be placed. They are afraid of being judged.* But I am going to assume that my readers have learned to be comfortable with themselves, and throw the idea out there anyway – not so much because I am completely convinced by it as to field your opinions. So here is the concept:

Denim and leather (and perhaps other materials besides) are objectively masculine, at least to the same extent that materials like satin or lace are feminine. The current popularity of leather and denim in female fashion is a trend, piggybacked on the popularity of feminism, and it does not reflect the objective attractiveness of the materials themselves. While women can often look attractive in denim or leather, they do so in spite of the materials, not because of them.


I've been testing the idea recently by mentally separating the factors of my attraction each time I see a hot girl wearing one of these materials. Certainly when I think about a woman wearing any piece of clothing in either denim or leather, I can always imagine her being sexier in something less rugged. I've never liked jean or leather skirts on girls; and although it is much harder to look objectively at jean pants (because they are so entrenched in current fashion), I find normal cotton way more attractive.

When I suggest to my male friends that leather and denim are unattractive on women – which I've done several times – I rarely get an enthusiastic chorus of agreement. I get, "Yeah I guess I can sort of see what you mean" or "No, man, I love a girl in a jean skirt." But I am pretty sure that these statements ultimately boil down to "I am not observant enough to figure out what turns me on about a woman's wardrobe" and "I love a girl in a skirt."

Again, this isn't a statement about what women should or shouldn't wear (they're your clothes, do whatever the you want), it is merely a statement intended to spark thought about whether your choice of clothes is an authentic expression of your personal taste or the voice of popular culture.

Oh and just for the record, I am OK with polo shirts on girls.

---------------------------------------------------------------
*In this sense, modern Western culture (at least when it comes to gender) is like a school system without testing. Everyone is just kind of learning at their own rate without an objective measurement of anyone's performance. You can imagine how outraged people in such a system would be the first time you were to suggest that there will periodically be these things called “exams” by which students' comprehension will be evaluated. There would be huge resistance. But testing in schools isn't the end of the world. Yeah, there is pressure to perform to a certain level, and the students that do poorly have to acknowledge the fact that they aren't as “smart” as the other students. But it introduces a degree of accountability that cannot otherwise be motivated, and the school system is better off for it.


Related Posts
1. "Because of" Versus "In Spite Of"
2. Don't Wear Sneakers
3. Femininity, Authenticity, and Compatibility
4. There Is Nothing Modest About Loose Jeans
5. Be Careful About Wearing Large-Shouldered Tops
6. Where Is Feminism Taking Us?
Previous Next