There Is Nothing Modest About Loose Jeans

Andrew
February 20, 2014
The Rules Revisited
Every now and then I meet or see a girl wearing loose jeans. By "loose" I don't mean that the crotch is sagging around her knees, I just mean that there are places on her hips, ass and upper legs where the fabric is not touching her skin. I suspect that girls do this for one of three reasons:

(a) They think their figure isn't attractive enough to wear tight jeans.
(b) The think that tight jeans are immodest.
(c) They don't care about their appearance and loose jeans are more comfortable.

No matter how fat you are, or how badly your ass is shaped, loose jeans make it look worse. Tight jeans might not make your ass or legs look good, but loose jeans will make you look like a man.

Here is the thing: modesty isn't a function of the quantity of skin you show, or the tightness of the clothes you wear; it is defined by how much your outfit makes men (or people in general) think that sex with you is imminent. The more you incite in men the thought that they can bang you easily, the less modest your outfit is. This is why short dresses are so much more sexual than pants. Men see you in a short dress and part of their subconscious recognizes that your vagina is essentially exposed (i.e. from the bottom). Sex seems much more accessible and immediate because there is only one thin layer of clothing covering the most sexually intimate part of your body. 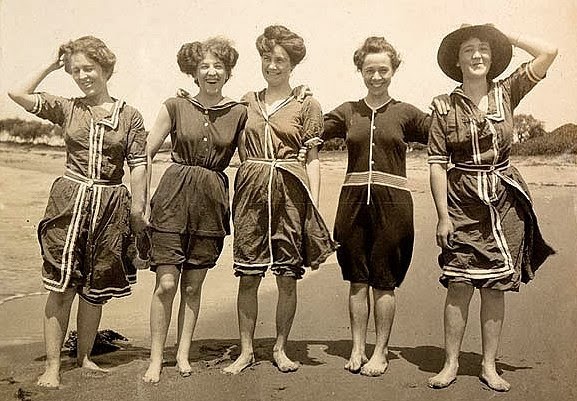 But the threshold for triggering a man's thoughts of sexual proximity - the criterion for immodesty - is entirely relative to social norms and context. The man on the beach doesn't think sex is imminent when he sees you wearing a bikini, because every woman on the beach is wearing in a bikini, and he knows it is for swimming or sunbathing. But in 1910, if a man saw a woman on the beach in a bikini, he'd be sure that she was a woman of loose morals - and he'd probably be right.

Anyway, the point here is that wearing tight jeans in everyday American life is about as shocking as wearing a bikini on the beach in 2014. And wearing loose jeans in everyday American life is far more similar than you think to wearing a Victorian bathing costume to a Las Vegas pool party. Perhaps more importantly, when you use your clothes rather than your behavior to be modest, you are far more similar than you think to the girls who use their clothes rather than their behavior to get sexual attention. Don't be so sure that you are more intelligent just because you made the mistake about modesty rather than sexuality.