What Men Think About Your Weight

Andrew
July 4, 2012
The Rules Revisited
When it comes to attracting men, your physical fitness matters - a lot. In another post I ranked it the single most important aspect of your external attractiveness to a man. Few men or women will deny this, and it isn't my point here to dispute the minority that does, or to belabor the point to those who already acknolwedge it (see point four below). Instead I want to point out a few things that women might not realize about their weight:

1. Shape matters more than size. We're all aware that some women seem to have great figures despite being a little larger than what most consider ideal. This is because a woman's proportions matter more than her overall weight; her shape matters more than her size. Her waist-to-hip ratio, or breast and butt shape or size relative to the rest of her body can be attractive to a man despite the fact that she is "overweight." Being concerned about your weight or BMI is important, but it is only half the picture. You will be able to get away with being a bit heavier than most if you have good curves. You won't be more attractive because you are heavier than most (i.e. you'd still look better if you slimmed down), but you don't need to do it to be attractive if you have the right shape. (Incidentally, in-shape black women blow away the competition when it comes to having great figures, which in most cases completely compensates for imperfect hair.) 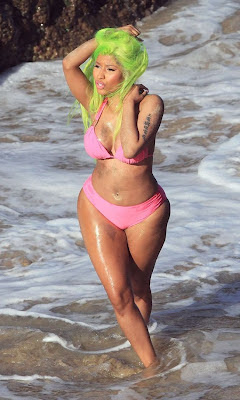 2. Shape matters more than size - up to a certain point. There are limits to the above-described phenomenon. While it is difficult (if not impossible) to quantify "a certain point" in terms of weight or even BMI, I can say this instead: women like Nicki Minaj are pushing the limits already, and are able to to do because they have great proportions. You'd be unnecessarily harsh on yourself to judge your body based on weight alone, but some women recognize the above phenomenon, and then wrongly excuse their size based on comments from friends that they have a "Kim Kardashian ass" or a "Beyonce butt." Comments like this are usually made by friends who are more interested in making you feel good about yourself than accurately describing your figure. While occasionally they will be sincere, you should think twice and make a strong effort to be honest with yourself before believing them.

3. Men don't need Victoria's Secret models. In the same way that you don't need a guy who is as daring, strong, attractive and clever as James Bond, men don't need a woman with a perfect body to be aroused - even wildly aroused. Most of us know that the models we see in the media are unrealistic and only portrayed at their best (just like you know that men like James Bond don't really exist). Furthermore - and more importantly - a woman in the flesh is far more real and immediate than a woman on a screen or the page of a magazine, and this immediacy translates directly into sexual power. In this sense, the advantage that the "girl next door" has over these "fantasy girls" is huge. This happens to be one of the reasons that men don't fall more easily into pornography addiction, but it also means that what you consider severe inadequacies are really not as severe as you think.

4. Your complex about being overweight is more unattractive than being overweight. Yes, your weight matters, but freaking out about your weight is much less attractive to a man than a few extra pounds. Within reasonable limits, an unhealthy body is preferable over an unhealthy mind. Obviously if you are pushing 300 lbs, no one will take the time to appreciate your healthy mind; but if you get to 110 lbs only by taking becoming obsessive about your weight, you aren't doing yourself a favor. As physically attractive as a girl might be, being bulimic (or otherwise anorexic) is so internally unattractive that she will always struggle to keep men, even if she doesn't struggle to attract them initially.

5. Your figure is significantly defined by your posture. If you get down to the perfect shape and size, you can still fuck it up entirely by having bad posture. Likewise, if your figure isn't perfect, you can still get the most out of it by improving your posture and holding yourself as well as you can. To this end, high heels will be your best friend.

6. You won't lose weight unless you want to. I am a firm disbeliever in laziness. Instead, I believe in knowledge and preferences: lazy people aren't people who lack the ability to motivate themselves to do things that everyone accepts as "good" or "right"; they are people who have different priorities, either due to ignorance or a differing opinion. A woman who works out all the time values her long-term fitness more than the short-term pleasure she gets from muching on snacks all day, or feeling full at mealtimes. If you struggle with managing your weight, it could be because you don't care what you look like (to some degree). But more than likely, it is because (a) you don't realize how much benefit you'd get from being thinner, or (b) you are short-sightted, such that you see more value in the short-term pleasures you get from eating than in the long-term pleasure of being in shape. Once you realize how much your weight matters when it comes to getting what you want in life (i.e. a man), or look into the future far enough to see that you will never be attractive unless you sacrifice the momentary comfort of satisfying your apetite completely, your priorities will shift, and you will spend more of your energy on your fitness - willingly.

7. Cardio isn't everything. If you want to lose weight you need to burn calories, running or using the elliptical machine is not the best way of doing this. Weight training burns essentially the same amount of calories, but also increases your metabolism for about an hour after your workout, which then continues to burn an additional 25 percent of the calories you burned during the weight training itself. Not to mention weight training is a much better way to shape and tone your body. Girls almost categorically avoid weights, and they are retaining pounds because of it.