You Can Control How Attractive You Are

Andrew
October 31, 2011
The Rules Revisited
I already have a fairly lengthy post making this point, but I am not convinced I made it strongly enough. I want to present it again in another medium, namely, photos. 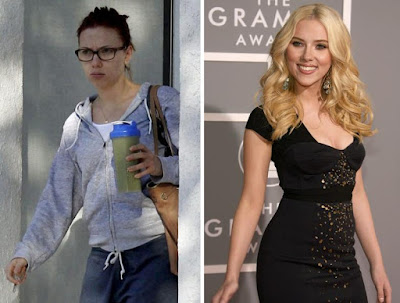 Notice the difference between Scarlett Johansson's attractiveness in the two photos above. The contrast is impressive. On the left, where she is dressed the way many American college girls dress for their morning classes, I'd say she is about 5, and I am probably padding that number just because I know she is a celebrity and can look the way she does on the right, where she is close to a 10. The only uncontrollable element of Scarlett Johansson's attractiveness between the two photos is the lighting, which counts for very little. Same girl, different level of attention paid to her appearance, dramatically different result.

It is true, of course, that Scarlett Johansson has professionals working with her to help her look this good. However, I could not disagree more that cosmetologists make a difference in excess of what any girl can do for herself, assuming she is willing to invest the time and effort to learn how. And I don't think the amount of time or effort required is as large as you might think. Cosmetologists are professionals only because they know how to make any woman attractive. They know the principles and are experts at applying them quickly for a variety of people. But you only need to become an expert on one person - yourself - and this is significantly easier.

Here is another example, less extreme but still telling: 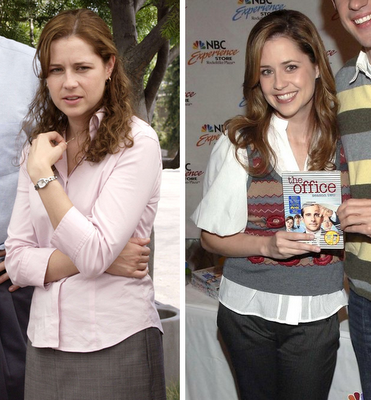 On the left, Jenna Fischer is about a 5, maybe a 5.5. On the right, she is a 7.5. The difference is in her hair, posture, makeup and the color of her clothes. If she wore better clothes still I think she could get up to an 8.5, but she rarely does, judging from the photos I could find online. 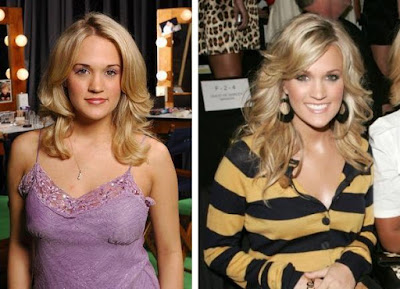 On the left, Carrie Underwood is a solid 7. On the right, she is a 9.5. In this case, the discrepancy has a lot to do with wearing her best colors getting the right amount of contrast, her hair, eyebrow shape and the hoop earrings. I'd argue that Carrie Underwood has maximized her attractiveness in the right photo. Nakedness, heels and lingerie might bump it up a notch, but otherwise she is playing all the right cards.

Here is a a non-celebrity example: 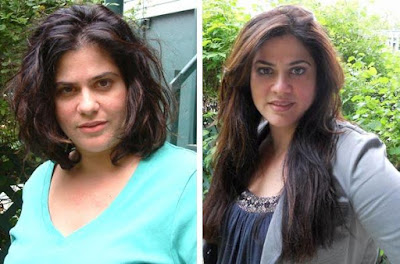 I don't know who the girl is, but on the left, she is about a 3. On the right, I'd say she is a 5. In this case, most of the change comes from hair length (yes, she is probably wearing extensions, but eventually she could grow it), plucked eyebrows, better clothes and a little makeup. By losing weight, spending more time on her hair and choosing her clothes even more carefully, she has potential to be a 7 maybe even an 8. You wouldn't believe this by looking at the photo on the left, but it is much more obvious once the improvements have been started. 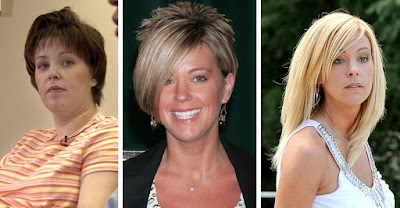 Left: 2; center: 4; right: 7.5. That is an overall increase of 5.5 points, largely accounted for by hair length, clothes and most importantly, weight loss (apparently a tummy tuck too, but she did have sextuplets... I call it fair). I don't know if she could look much better, but she'd done a damn good job leveraging what she has to work with.

If you want to see more examples, try using the term "makeover before and after" in an image search, or search for pictures of celebrities without makeup. You might argue that all of the women above have pretty faces, so they all have some initial potential to be attractive. There is some truth to this, namely, that they have the potential to be more attractive; but it does not mean that a girl with an asymmetric face, enormous nose or irreparably crooked teeth is doomed to be ugly. I've seen pretty girls that match all of those descriptions. True, a girl like this probably can't become as attractive as Carrie Underwood, or maybe even Kate Gosselin. However, the ability to improve her look is still there; she will just have to focus on the other aspects of feminine beauty to make that improvement, and there are many to choose from. The main reason I didn't put up photos to demonstrate this is that I couldn't find any. Most of the "before-and-after" photos on the internet are of famous people, and most famous people have attractive faces. But consider Lady Gaga or Paris Hilton: neither of them have pretty faces, but both of them (can) look attractive. Also, consider this woman: 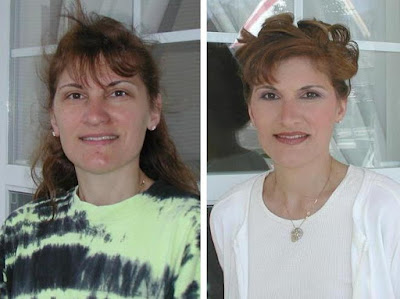 Although she actually has a decent facial structure, a lot of people would say that she has an ugly face if they only saw the left photo. But on the right, when the same face is presented well, it is clear that the problem is not facial structure, but rather, presentation. So be careful about assuming you have a bad face. Most likely you do not, and even even if you do, there is still a lot you can do to improve your look.

Anyway, the ultimate point, again, is that no one has to be ugly. By making an effort, you can drastically improve your appearance and attractiveness, and in many instances, girls can transition from "ugly" to attractive. And while you may think you have optimized your own look, it is unlikely that you have. Think carefully about your weight, the color and cut of your clothes, your hair style, grooming, makeup, posture, etc. All of these things can make a huge difference, and can be leveraged to increase you attractiveness.