Your Age And Your Attractiveness 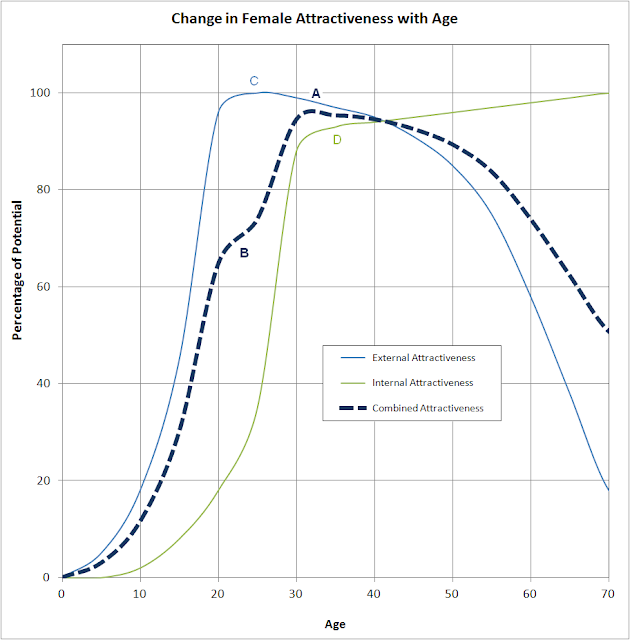 Notes:
Don't pay too much attention to the values on the vertical axis. What matter more here are the rough values on the horizontal axis, i.e. when the peaks or changes occur. This is typical, not representative of all women. See this page for example variations. Other sources have real studies that are interesting and tend to agree with this illustration.
While I think this plot can largely speak for itself, I do want to highlight and qualify a few things.

I shaped the curves for internal and external attractiveness separately, without giving consideration to each's effect on the combined curve. When I plotted internal and external attractiveness combined, and saw the "lull" in the early twenties (A), I was a little surprised. But upon reflection, it made sense. The "lull" is the point where a girl looks beautiful but has yet to come into herself. She is hot but boring to spend time with. So many girls in their early twenties are this way. Their overall attractiveness stalls until they develops their personality throughout their twenties. Some women never make this internal development, as illustrated in one of the example variations, posted here.

Notice that the full potential for combined attractiveness is never reached, because the peak of internal and external attractiveness do not occur simultaneously. While this is not always the case, I think it is often so, because women tend to spend their effort on looks or personality at different times in their life.

Read Next: American Women Are the Best

Related Posts
1. Men and Sexual Variety
2. Don't Let A Guy Waste Your Most Eligible Years
3. Some Older Women Are Smart
4. What Men Think About Older Women
Previous Next