Why are so many feminist consider brave for "standing up to the patriarchy" despite living in a country that allows people like them to flourish. 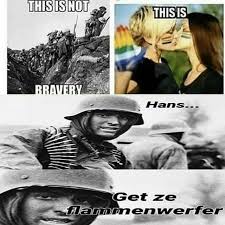